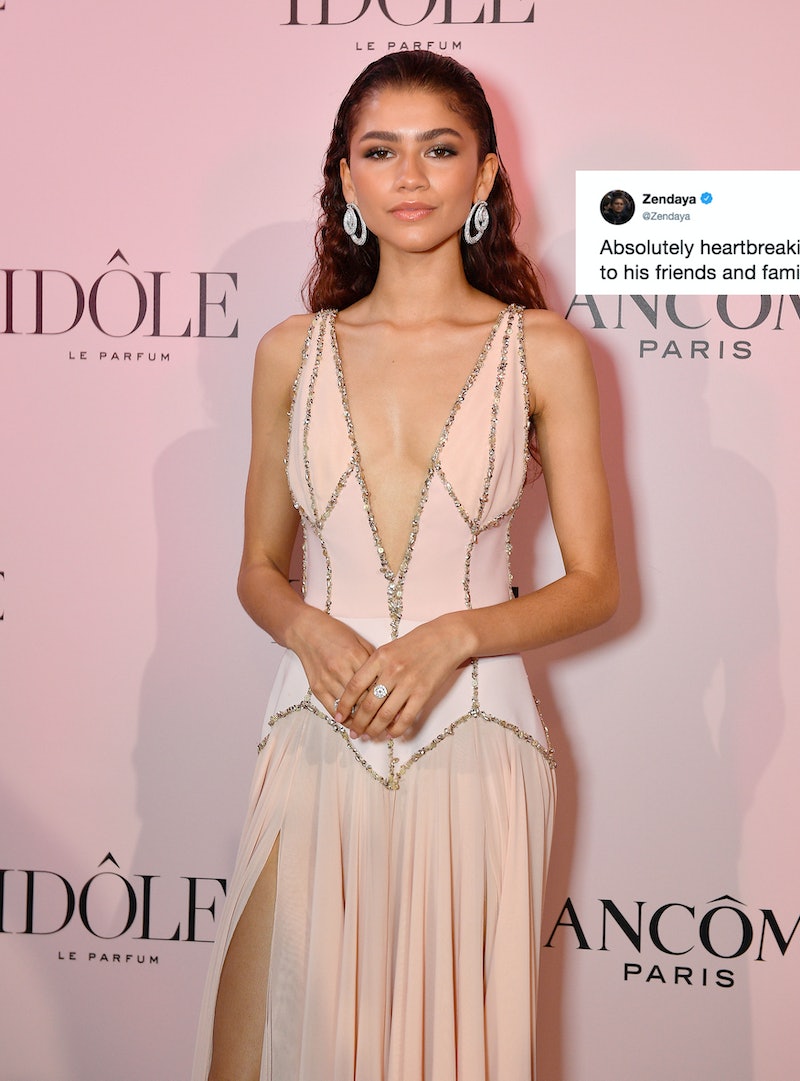 Celebrities and fans alike are mourning the loss of a young Disney Channel star. On Sunday, July 7, Zendaya paid tribute to Cameron Boyce, sharing that she would be keeping his friends and family in her thoughts. As reported by E! News, Boyce passed away in his sleep from a seizure as a result of an ongoing medical condition, which his family confirmed in a statement. The 20-year-old actor was best known for his roles on Disney Channel's Jessie and Descendants. Zendaya and Boyce were both part of the Disney community, so the loss was sure to feel close to home.

Zendaya posted her tribute to Boyce on Twitter, sharing a picture tweeted by Collider. The publication's original post read, "Rest in Peace, Cameron Boyce." Zendaya reposted the message with a few words of her own, writing:

"Absolutely heartbreaking, my heart goes out to his friends and family."

In 2011, Boyce appeared on an episode of Shake It Up, on which Zendaya starred with Bella Thorne. The Euphoria star's fans replied to her tweet with their own memories of Boyce, including one person who wrote, "I still remember his cameo on 'Shake it up'. Truly such a talented young man." Another fan responded to the post with pictures of Boyce from Jessie, writing, "He was a huge part of many of our childhoods. I can’t process this."

On Sunday, Disney Channel issued a statement regarding Boyce's passing, as reported by CNN. "From a young age, Cameron Boyce dreamed of sharing his extraordinary artistic talents with the world," a spokesperson told the outlet. "He was an incredibly talented performer, a remarkably caring and thoughtful person and, above all else, he was a loving and dedicated son, brother, grandson and friend. We offer our deepest condolences to his family, castmates and colleagues and join his many millions of fans in grieving his untimely passing. He will be dearly missed."

Zendaya wasn't the only Disney Channel alum to post about the loss on social media. Jessie star Skai Jackson shared a picture with Boyce from their show on Instagram. She wrote:

"I don’t even know where to start... I am at a loss for words. I never thought in a million years I would be writing this. Cam, you were one of a kind. My heart will be forever broken. I am so happy that I got to spend almost everyday with you on set, you gave the best hugs. I wish I would have hugged you tighter when I saw you a couple of months ago."

"Still in shock that we’ve lost this light I’ve known you since we were four and since that moment it has been clear how talented/ how kind/ how full of energy and love you are. One of our first jobs together I was princess jasmine and you were buzz lightyear which is apropos because throughout the years your brilliance has only grown stronger and more unstoppable. Your spirit has left an indelible impression on everyone lucky enough to know you and I’m grateful to be one of them"

Adam Sandler, Kenny Ortega, Charlie Puth, and Salma Hayek were also among those who mourned the actor's passing online. It's clear that Boyce's personal and professional presence had a strong impact on those around him. Zendaya's message on social media is just the latest reminder of how much Boyce will be missed.

More like this
Alicia Silverstone Revives Her 'Clueless' Character In This Super Bowl Commercial
By Jake Viswanath
12 Years Ago, Austin Butler Manifested His Oscar Nom In This Disney Movie Scene
By Jake Viswanath
Ashton Kutcher Wants Danny Masterson “To Be Found Innocent” In Rape Retrial
By Jake Viswanath
The Jonas Brothers' New Album Has A Very Meta Name
By Alyssa Lapid
Get Even More From Bustle — Sign Up For The Newsletter
From hair trends to relationship advice, our daily newsletter has everything you need to sound like a person who’s on TikTok, even if you aren’t.