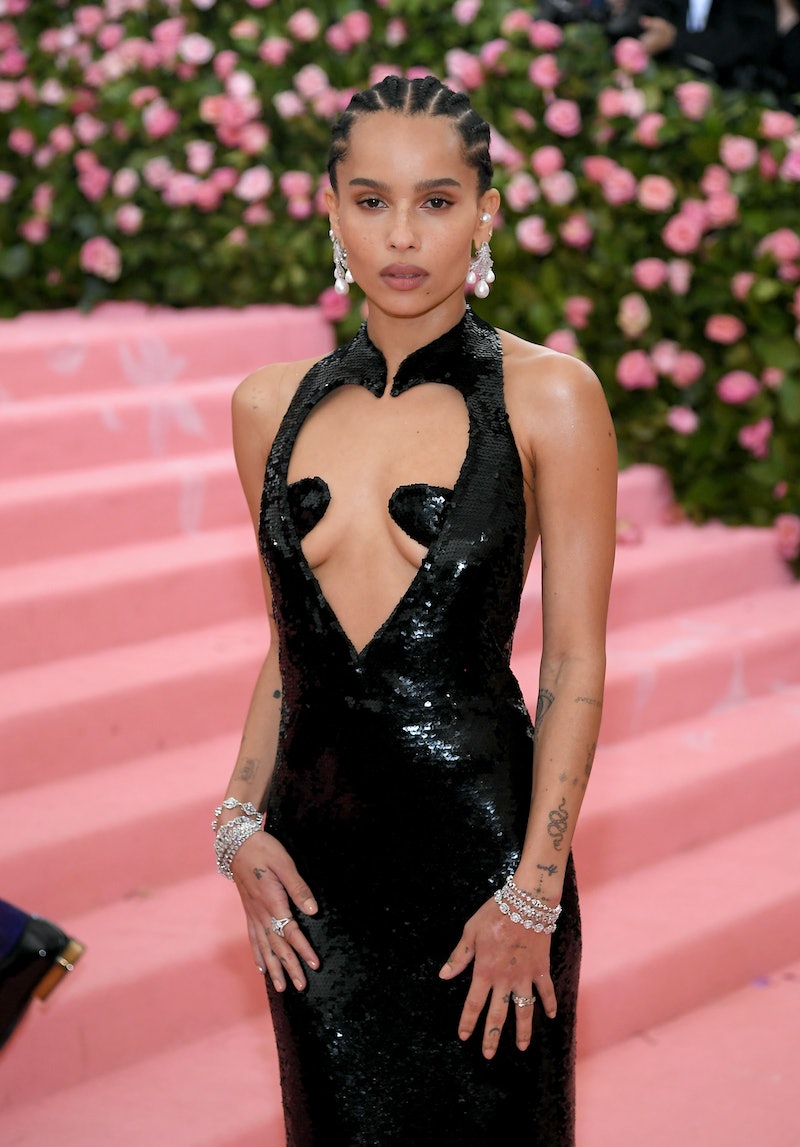 Warner Brother's newest Batman film just got a lot more female power. Zoë Kravitz has been cast as Catwoman in The Batman, according to a new report from Variety published on Monday, Oct. 14. The Big Little Lies actor will reportedly star opposite Robert Pattinson, who signed on to play Bruce Wayne, aka the Batman himself. Director Matt Reeves appeared to confirm the news on Twitter, sending out a GIF of Kravitz saying "Hello."

A representative for Kravitz confirmed the casting to Bustle, while a rep for Warner Brothers confirmed to Bustle that the actor has been cast as "Selina Kyle." As fans of the DC comics know, Selina Kyle is Catwoman's real name. And fans of Christopher Nolan's The Dark Knight Rises will remember that Anne Hathaway's Catwoman character was also named Selina. Of course, it's possible that Kravitz's version of the character won't be the cat burglar known as Catwoman, but given the character's iconic black catsuit and status as a DC hero and villain, it seems likely that she will appear in some form of her alter ego.

Rumors that Kravitz was circling the role of Catwoman have been running rampant since September, after she shared a photo of herself wearing a Batman shirt on Instagram. Another rumor, as reported by Comicbook.com, suggested that Reeves wanted to cast Kravitz, but due to her busy schedule was expanding his search for a woman of color to play the iconic role.

Catwoman was, like many other comic book characters, originally drawn as a white woman when she made her Gotham debut in 1940. Since then, she's taken on a few different iterations, and been played by women of color multiple times. On television, she was played by Eartha Kitt in five episodes of the Batman TV series from the '60s. And actor Sanaa Lathan is reportedly voicing Catwoman in an upcoming Harley Quinn animated series. On the big screen, Catwoman was famously portrayed by Halle Berry in her title movie, Catwoman (2004).

In fact, even Kravitz herself has played the role before. She voiced Batwoman in 2017's hit The Lego Batman Movie — which also raises some interesting crossover possibilities — though the role was small. "It was really quick — I did my voice in a day," she told Variety of her role in the Lego Batman Movie. She revealed that she "tried to channel my inner child," and added that the biggest challenge for the role was to figure out where to add in an extra "meow."

Kravitz joins a rumored Batman cast of Jonah Hill, who is reportedly playing a soon-to-be-determined villain, and Jeffrey Wright, who is reportedly set to play Commissioner Gordon. The film is currently set to premiere on June 25 in 2021, and is set to launch a new DC Extended Universe (DCEU) on the big screen. While most recent DC movies, including the massive hits Wonder Woman and Aquaman, took place in the shared universe established by Batman v. Superman: Dawn of Justice (2016), this upcoming Batman will, it seems, break off from that world, thanks to the recasting of the caped crusader, with Pattinson taking over from Ben Affleck.

It's unclear what this break will mean for the future of DC films, or The Batman's relation to the upcoming Wonder Woman sequel, but one unintended consequence might be that it will deprive fans of seeing Kravitz play Catwoman opposite her stepfather Jason Momoa's Aquaman. That said, a DCEU family affair could be exactly what the franchise needs.

More like this
'The Queen’s Gambit' Season 2 Tweet Wasn’t From Anya Taylor-Joy
By Mary Kate McGrath, Jack Irvin and Grace Wehniainen
Kukulkan From 'Wakanda Forever' Has A Surprising Connection To Marvel History
By Grace Wehniainen
Netflix Shut Down 'Bridgerton' S3 Rumours About A “Very Dark” Storyline
By Bustle
Everything To Know About 'And Just Like That...' Season 2
By Jack Irvin and Grace Wehniainen
Get Even More From Bustle — Sign Up For The Newsletter
From hair trends to relationship advice, our daily newsletter has everything you need to sound like a person who’s on TikTok, even if you aren’t.