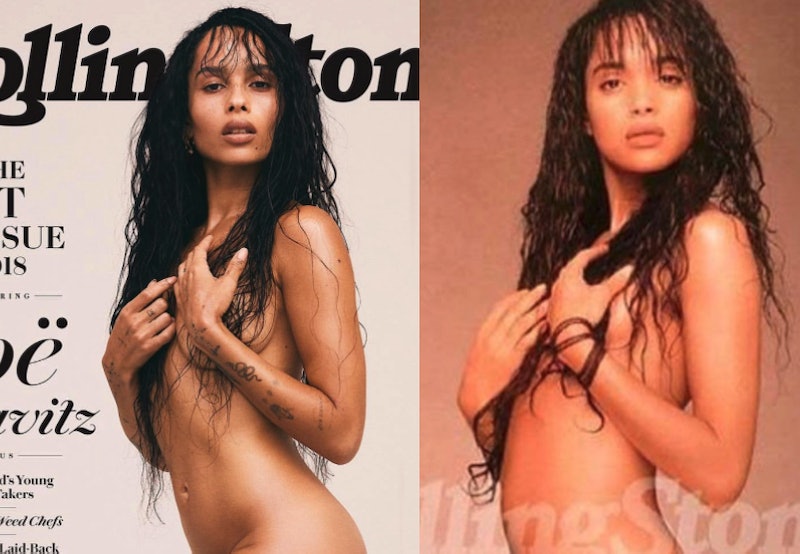 Growing up Zoë Kravitz couldn't have been a simple life. Not only are you under the watchful eye of a rock star dad and then you have a Huxtable for a mom. As it turns out, Kravitz was literally a talent in the making, as a pregnant Lisa Bonet covered Rolling Stones' Hot Issue. 30 years later, Zoë Kravitz now recreates the flawless nude cover as an ode to her famous mama.

Zoë Kravitz has never been one to stick to ordinary tradition, and this steamy cover was no exception. On the original cover Bonet graced, she served readers a whole lot of "bawdy" back in 1988 save for a white shirt. Instead of sticking to the same photoshoot concept, the actress told Rolling Stone she wanted to reach into the pages of the spread to derive inspiration from a fiercer photo.

"I think she was a little bummed when they used the shirt picture as the cover,” Kravitz said. “I think she just thought, ‘I’m doing it, let’s do it!’” Naturally, she gifted fans with a recreation of her mom's desired cover. “It’s less about the picture and more about doing the thing my mom intended to do. That feels cool.”

The actress decided on shooting the exact same pose and styled with the same wet hair look that her mom sported in her 20s. These shoots look eerily similar. Like, mother-like-daughter kind of similar.

In this upcoming November issue, Kravitz not only shines light on her mother's influence, but her dad Lenny as well. She also admitted that she while she loves being a part of her famous family, she wanted to make a name for herself by herself.

“I’ve kind of stayed away on purpose from referencing my parents, because I’ve been just trying to create my own identity,” she told Rolling Stone. “But I feel like it’s a good time. I feel comfortable in my own skin. And it’s nice to do that homage to them. Because I love them! They’re my parents!" Awww!

The actress, though, has seriously come into her own in the entertainment industry. Fans first got a glimpse of 21-year-old Zoë in X-Men: First Class with Hunger Games starlet Jennifer Lawrence. After her moment with the Marvel characters, she followed up with an action-packed appearance in Mad Max: Fury Road and then again in the Divergent films. And regardless of her action-adventure resume, she's even made a cameo on IFC's Portlandia to show her more comedic side.

Her last order of business in the interview was to describe her version of what "hot" means. “To me, ‘hot’ means someone who’s vibrant and confident and comfortable with who they are,” she said. "When somebody allows themselves to be who they are unapologetically — and they’re a good person — that’s really hot.”

And needless to say, it's very similar to the answer her mom gave the issue back in the 80s. It seems that when it comes to having progressive ideals, they like to keep it all in the family.