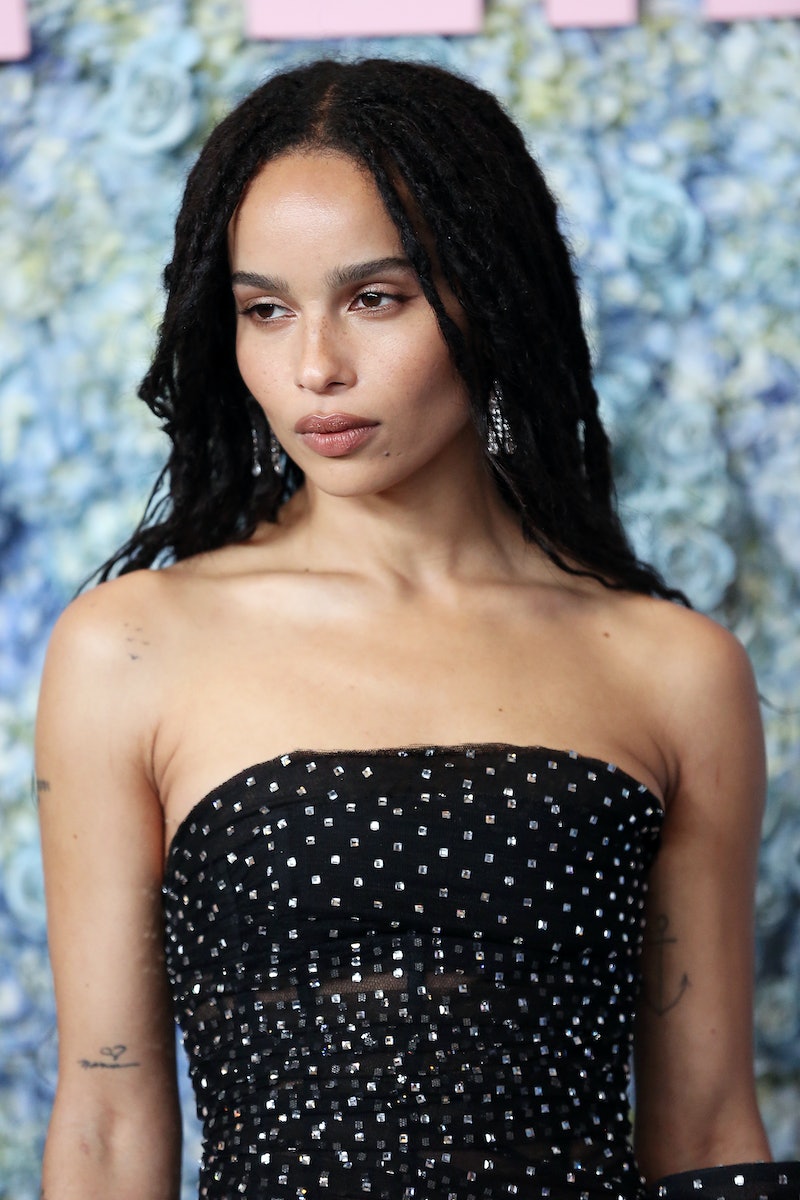 While Zoë Kravitz got married over the summer, until now, fans of the Big Little Lies actor hadn't gotten a glimpse of her bridal fashion. That's changed now. Zoë Kravitz's wedding dress made its Instagram debut just in time for the new year, and it'll give you Big Little Lies vibes in an unexpected way.

Prior to the start of the new year, Kravitz took to her Instagram account to showcase never-before-seen photos from her wedding day, according to Elle UK. From her famous family members to celebrity guests like Alicia Keys, Kravitz gave an intimate look at her wedding, and fans of her style got their first sight of her Alexander Wang wedding dress.

While Kravitz did not tag the designer in her photos, Wang has left multiple comments on her images, and last week, Kravitz actually posted a photo of Wang lounging in a chair in order to wish him a happy birthday. Now that fans have seen Kravitz's dress, it appears to be hanging behind Wang in that same photo.

As for the gown itself, the actor didn't opt for a traditional full-length gown but instead chose a sweet and feminine tea-length design with a full skirt and drop waist. Delicate straps formed a large scoop neck that was mirrored in the back of the dress.

If the design looks familiar, there's a good reason why: It's almost identical to a famous Audrey Hepburn gown.

If you're not familiar with Hepburn's film catalogue, the actor starred in Funny Face in 1957.

The film follows Hepburn's character, Jo Stockton, as she is reluctantly thrown into the world of fashion. The film is rife with famous style moments — like Hepburn's famous black pixie pants and flats. Perhaps most famous, though, is her final look of the film, a tea-length Givenchy wedding gown (Hubert de Givenchy, founder of the house, was the movie's costume designer alongside Edith Head, NBD).

Of course, the Audrey Hepburn inspiration may lead fans to another connection — one to Big Little Lies. Not only did the actor post a photo of herself and her four costars — Nicole Kidman, Reese Witherspoon, Laura Dern, and Shailene Woodley — but her wedding dress harkens back to one of the most iconic moments in the show.

In the final episode of the first season, all five women attend a fundraiser trivia night at their children's school. It's at this event where a person is found dead and a homicide investigation is launched, creating the crux of the entire first season. The event's theme? Elvis Presley and Audrey Hepburn. All five women, Kravtiz included, are dressed in their Hepburn-inspired finest, just as Kravitz did for her wedding.

While Kravitz didn't end up rocking Bonnie's laid-back, boho ponchos for her wedding day, the actor did have another type of Big Little Lies moment. From the Hepburn-inspired design to the subtle nod to the show, Kravitz wedding gown was stunning.