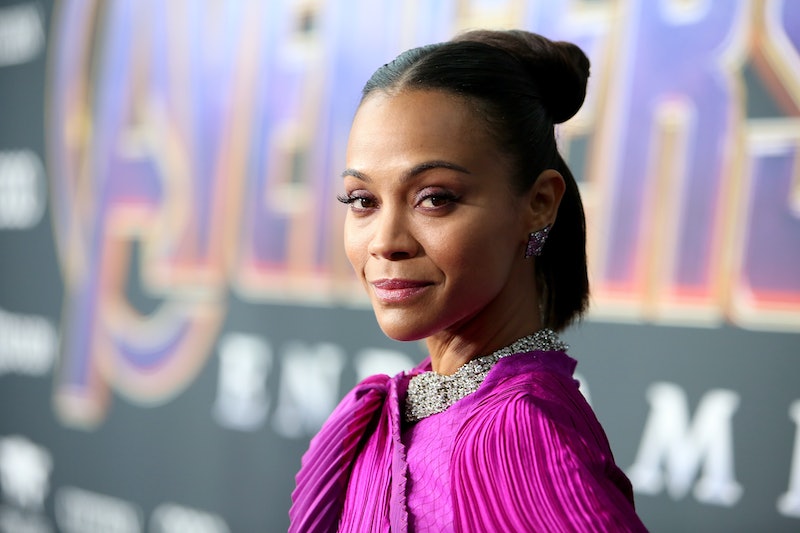 Guardians of the Galaxy actor Zoe Saldana wants to create a "gender-neutral environment" for her three sons, and her explanation about it is serious parenting goals. Zoe Saldana and her husband encourage gender equality by leading by example, she explained to Us Weekly, and they seem to have things down pat.

"I'm always gonna be honest, and that is always the best way to welcome healthy and truthful discourse, especially around parenthood," Saldana told the magazine during an interview on Tuesday. The actor added that her 4-year-old twin sons, Cy and Bowie, "made a comment two weeks ago like, 'Boys are stronger than girls,' because they're in that stage of comparisons."

"You have to take a moment and kind of put together an answer that they will understand," Saldana added. "[To] not bring all this charge that you have as an adult and as a woman into their lives. They're a blank slate."

Saldana's point makes total sense. As much as adults may want to spout off facts about equality to help their kids understand the situation, things can easily go over their heads, especially when children are super young. So she and her husband, Marco Perego Saldana, are meeting their children at their level and working to address conversations about those issues in age-appropriate ways.

Us Weekly also pointed out that in a previous interview with the magazine, Saldana had shared how she wanted her home to be a "gender-neutral environment" for her three kids. She told the magazine in June 2018,

"We have a very gender-neutral environment where my husband participates in a lot of tasks that were normally given to women and vice versa. I get to do a lot of male things, which is, I don't know, put the TV together, fix things that break. We're sort of a very gender-fluid household. I think it's important to raise boys in that environment, and girls as well."

In addition, Saldana told the magazine that she and her husband buy their kids both "female toys and male toys." Parents can't control what kids hear from their environment, like the comment she mentioned from her twins about boys being stronger than girls. But they can control the example and message they set at home, and it sounds like the Saldanas are doing just that.

There's also another way the couple is setting an example of equality for their children: The actor's husband took her last name after their wedding. In fact, Saldana "tried to talk him out of it," she explained to InStyle in 2015, but he was determined to take on his wife's name.

As the couple's children get older, the Saldanas will probably teach them more about inequality, and how they can fight it through their actions. But for now, they're setting an example of equality through their own relationship, and through the toys they buy their kids. It sounds like the perfect recipe for a well-adjusted family, and for three kids who can grow up to be whoever they want.