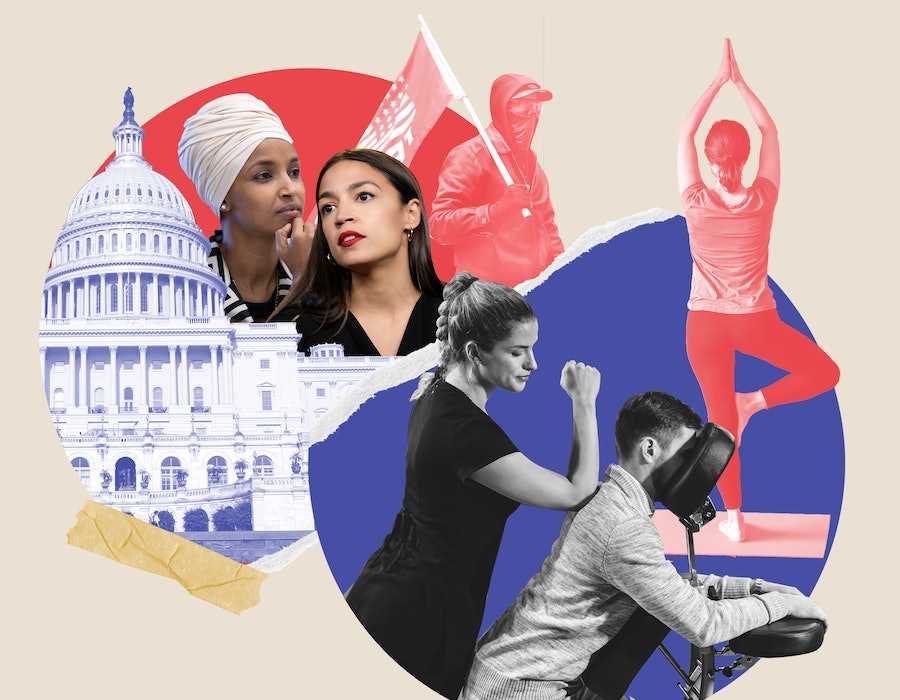 One of the first things David O’Boyle notices when walking into the House Center for Well-Being is how pristine the space feels. Soft gray walls frame the entrance room, accented by fresh white trim. Nature videos loop on a flat-screen TV. It’s quiet. Sometimes he’ll pass puppies ready for cuddling, or individually planted rosemary and lavender seedlings, which visitors can take home. Soon there will be more plants, he says. But this isn’t Goop headquarters, and its patrons are neither Kardashians nor their Malibu contemporaries — they’re American politicians and political staffers, and the House Center for Well-Being is arguably the most relaxing office on Capitol Hill.

“The location has a modern design, more modern than your traditional [U.S.] House office,” says O’Boyle, a spokesperson for the Office of the Chief Administrative Officer, which oversees the Center. “[It’s] designed to provide a warm, comfortable, and inviting space to spend a few minutes.”

“The goal is going to be to have these little oases all over Capitol Hill at some point,” adds Rep. Tim Ryan (D-OH), who spearheaded the Center’s creation.

Launched in October 2018, the Center was designed as a refuge for U.S. representatives and their staffs, who were heading into a volatile Midterm election. Now, six months after the Jan. 6 insurrection and amid the ongoing COVID-19 pandemic, the mental health of D.C. workers is even more front of mind. In the past six months alone, representatives have spoken about trauma among D.C. staffers, and many members — such as Reps. Alexandria Ocasio-Cortez, Ilhan Omar, and Rashida Tlaib — receive regular death threats. After the Jan. 6 attack, one anonymous staffer told CQ Roll Call, “When I see members in the hallway or the basement [who downplayed the violence], I think to myself that they wouldn’t care if I was dead.” Another chief of staff told CQ Roll Call that her team is “seriously struggling.” Ocasio-Cortez is in therapy.

“The workers who were in the Capitol [and] the other buildings were traumatized,” says Ryan of Jan. 6. “And so it’s an opportunity to ramp [up] the mental-health promotion.” In response, the Center offered webinars on well-being and coping with traumatic events, and distributed pamphlets and emails about dealing with trauma.

Washington D.C. has been long overdue for a checkup. In 2012, a study by the Congressional Management Foundation and the Society for Human Resource Management found that one-third of Capitol workers didn’t have enough time to get their work done, despite working well beyond 9 to 5. Junior staffers earn notoriously low salaries, and many take on second gigs for supplemental income. According to a June report from Business Insider, staff or legislative assistants sometimes start their jobs in the high $20,000 range.

“D.C.’s an insane place,” adds Ryan, who’s in his tenth term and ran unsuccessfully for president in 2020. “It’s a high-stress job for staffers, too, who don’t make a lot of money. It’s very unhealthy, quite frankly.”

The idea came to him while he was on a book tour for A Mindful Nation: How a Simple Practice Can Help Us Reduce Stress, Improve Performance, and Recapture the American Spirit. (The book was republished in 2018 with a new title.) “Silicon Valley went through a transition of, like, not giving a sh*t about their workers,” he says, “[to] building a culture within their own businesses around health and wellness.” Ryan is hoping to do the same thing in D.C. and, as a member of the committee that funds the legislative branch, helped secure $380,000 to establish the House Center for Well-Being.

In March 2021, the office re-opened a renovated space in the Longworth House Building — a short walk from Ryan’s own office — and sits a couple doors down from the House Dunkin’. Throughout the pandemic, it’s offered virtual meditation and yoga classes, as well as sessions on personal finance. A roster of coaches supports participants through a “holistic” six-pillared approach, which emphasizes physical, emotional, financial, social, community, and career betterment.

For the chamber’s overachieving and over-caffeinated workers, all 10,000 of them, it couldn’t be more convenient. According to O’Boyle, since its 2018 launch, the Center has had thousands of visitors online and at its new location, and clocked more than 100 one-on-one coaching sessions.

But will yoga and therapy dogs really fix a system that relies on tough working conditions? Or is it just another Band-Aid?

“There is never going to be one magic bullet that can solve all of our issues,” Ryan says. “[But] we should continue to provide these kinds of positive resources and benefits to staff and keep pushing toward progress.” (Ryan says his team receives “as competitive of salaries as possible within the House of Representatives budget constraints.”)

Last month marked the Center’s third-annual “Well-Being Fair,” a monthlong celebration timed to National Well-Being Month. “My hope,” Ryan says, “is that everybody on Capitol Hill uses this and learns these practices to help them manage their stress and their trauma.”

More like this
Bonnie Milligan's Wellness Routine, From Daily Journaling To Drugstore Teas
By Jessica Derschowitz
Here’s Where The NHS Nurses’ Strike Currently Stands
By Sophie McEvoy
Why Being “Too Sensitive” In Relationships Is A Good Thing
By Lexi Inks
18 Hinge Prompt Answers To Try If You’re Looking For Something Casual
By Lexi Inks
Get Even More From Bustle — Sign Up For The Newsletter
From hair trends to relationship advice, our daily newsletter has everything you need to sound like a person who’s on TikTok, even if you aren’t.