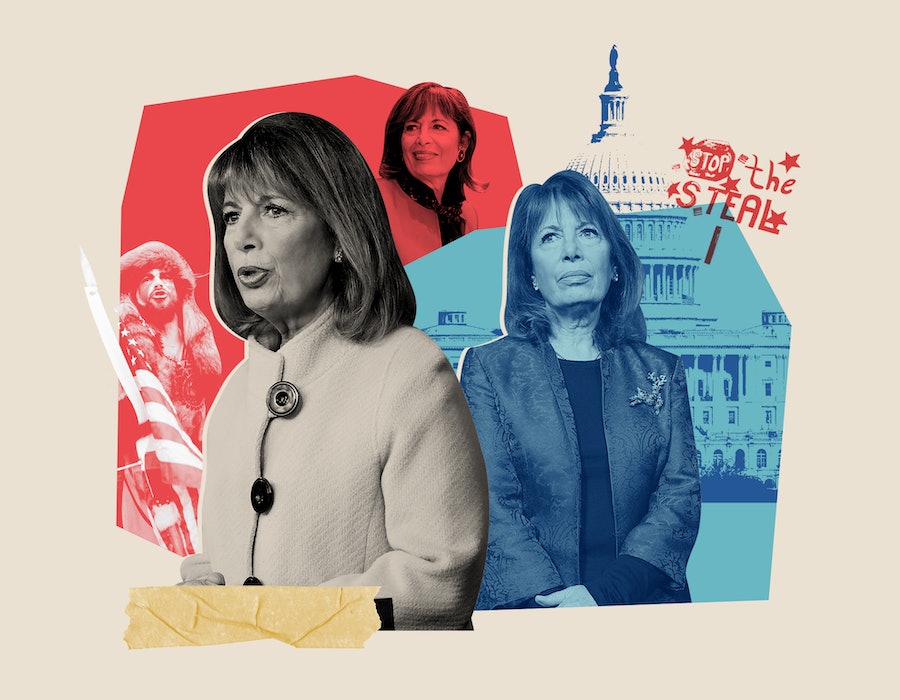 Jackie Speier knows what it’s like to nearly die. In 1978, while working as an aide to California Congressman Leo Ryan, she visited cult leader Jim Jones’ compound in Guyana, South America. She was there to investigate stories of physical, sexual, and psychological abuse by Jones. As the delegation tried to leave Jonestown, they were ambushed by his men. Rep. Ryan and four others died in the attack. Speier, then 28, was shot five times and left for dead on a remote airstrip for 22 hours. The next day, 900 of his followers would be murdered after drinking a cyanide-laced grape drink. Remarkably, Rep. Jackie Speier survived — and came away with a resolve not to waste a minute of the rest of her life.

In January, the Bay Area congresswoman faced another brush with death when thousands of rioters assailed the U.S. Capitol. She was in the House gallery amid the armed police standoff. During the hours-long insurrection, she despaired. “I thought to myself, ‘How are we ever going to get them out of there?’”

Speier, now 70, has spent her life making good on her promise not to waste any time. She’s fought for women’s rights, first in the California state legislature and now in Congress, where she was elected to Ryan’s former seat in 2008. This year, she’s spearheading a new push for the Equal Rights Amendment (ERA), a proposed constitutional revision that would guarantee equal rights for all Americans regardless of sex. “We've always been second-class citizens in the Constitution,” Speier says. “I'm doing this for my daughter, and someday my granddaughter. It's just time.”

In 1972, Congress passed the ERA, which was then sent to state governments to ratify. But it fell short of the number of states required to enshrine it in the Constitution, whose votes were needed by a 1982 deadline. Since then, additional states have signed on, meeting the necessary threshold for ratification. And so in late January, with Democrats holding majorities in both the U.S. House and Senate, Speier and her colleagues reintroduced a bipartisan resolution to ax the 1982 deadline, which could pave the way for an ERA victory.

Here, the Californian talks to Bustle about discrimination, her new colleagues, and a fragile democracy.

How would it tangibly affect women’s lives?

Just ask people like Peggy Young, who worked for UPS. When she got pregnant, she asked for an accommodation of not being able to lift more than 20 pounds. They said, "That's a huge liability, no. You're going to have to take unpaid leave, los[ing] your health insurance while you're pregnant." Meanwhile, when she did file a lawsuit, they found that men who had diabetes or heart disease at UPS, who couldn't lift more than 20 pounds, were given accommodation. That is clear discrimination. [Or ask] Tracy Rexroat, who was hired at the Department of Education in Arizona at the same time a male colleague was hired, for the same job, but was making $17,000 less [than him], because Arizona decided to rely on what your last salary was to program your salary at the department. She filed a lawsuit. In both cases, they weren't successful in arguing sex discrimination, even though it was patently there. [Editor's note: While pregnancy discrimination is sex discrimination, according to the Feminist Majority Foundation, the Supreme Court does not consider it as such. An amendment could strengthen protections against such discrimination.]

Why do you have faith that now, nearly 50 years after it was passed by Congress, it can be fully ratified and put into the Constitution?

We have a president and a vice president who have both articulated their support for the ERA. We expect [them] to do their part, and we're going to do ours.

Speaking of the new administration, their entrance was preceded by violence. What was your experience of the Capitol insurrection?

It was a horrible day. I was one of the members who were locked into the [House] gallery when [insurrectionists] breached the Capitol. They were pounding on the doors of the chamber. We were directed to open pouches underneath our seats, which frankly, I didn't realize we had. You're shaking, you're unzipping this canvas bag, pulling out this aluminum-covered package. All of a sudden you have this gas mask in your hand, and you think you're at war. We had to crawl under all of the brass rails to get to the other side. Then we were told to lie down on the floor. I heard a shot ring out. It took me back 43 years to being on that airstrip in Guyana, except my God, I was here in my country. I was here in the tabernacle of democracy and we were about to potentially lose our lives. I remember placing my cheek on the cold marble and thinking, this may be it.

You feared for your life.

Oh, of course. I mean, they had breached the Capitol. They had been able to break through a phalanx of Capitol Police. We didn't know what they had in terms of arms. And they were aggressive. Our fear was that they were going to do us harm.

There were six to eight police officers in the chamber, who were yelling orders contradicting each other. They said, “Well, go over to that door and exit.” But we heard pounding on that door, so [the officers] said, “Stay put.” Some time passed. Then they said, “All right, you can go out that door now.” We go out the door, and I look to my right, and there are rioters with Capitol Police holding their assault weapons at them, having subdued them. We raced down many flights of stairs to a secure location, where we were for hours.

How did you feel in those moments?

Initially, I had this sense of resignation. If it's going to happen, it's going to happen. But then after we were safe, it instilled in me this commitment to make sure we convey to the American people what just happened. It was an act of insurrection. It was an effort to overthrow the government. It will happen again if these people aren't brought to justice.

It recently came out that Republican Rep. Marjorie Taylor Greene has made comments about executing prominent Democrats. Does that scare you?

It disgusts me. It doesn't scare me. I'm concerned about her being a part of the QAnon conspiracy theorists, because they're not connected to reality. And if they convey to her that they want her to do something, I'm concerned about her willingness to act on their behalf. [Editor's note: This week, after years of supporting QAnon, Greene distanced herself from the conspiracy theory in response to intense congressional pressure.]

What lesson do you hope your grandkids and the next generation take from all of this?

We have got to be vigilant about protecting this democracy. It is fragile.

More like this
Jessica Simpson On The Time She Was Pursued By A Backstreet Boy & An *NSYNC Member
By The Editors
At 28, Rosie Perez Risked Her Career To Stop Playing Stereotypes
By Gabrielle Bondi
Hailee Kaleem Wright's Topsy-Turvy Path From MTV To Broadway
By Samantha Leach
Eurovision Has Been Given A Whole New Look Ahead Of Its Liverpool Debut
By Bustle UK
Get Even More From Bustle — Sign Up For The Newsletter
From hair trends to relationship advice, our daily newsletter has everything you need to sound like a person who’s on TikTok, even if you aren’t.