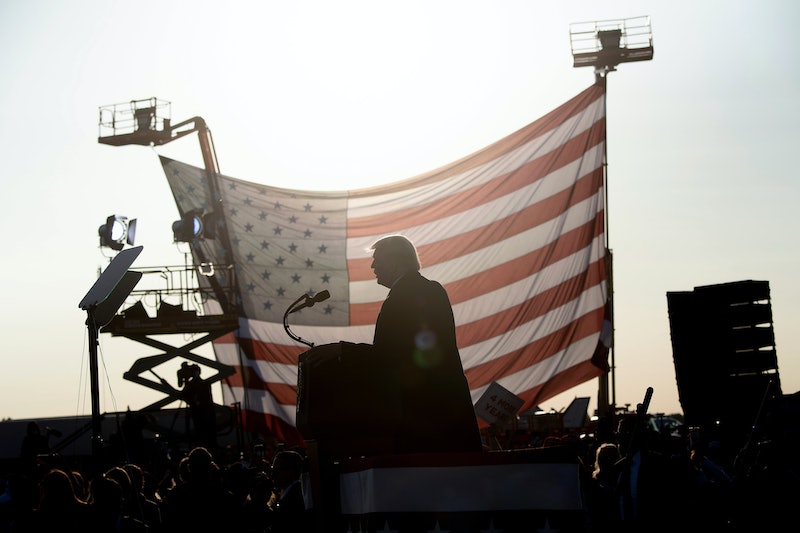 Donald Trump’s current legal battles likely won’t be his last. According to a New York Magazine article by Olivia Nuzzi, he understands the hot water he’ll be in once leaving the White House. “He wants to lose. He’s out of money. He worries about being arrested,” a friend of the president told Nuzzi before the election was called for Joe Biden. But could Trump actually be arrested? It would be unprecedented — but so has been much of his American reign.

For nearly four years, allegations of Trump breaking the law have run rampant, from accusations of financial corruption to when, in 2019, he literally asked a foreign government to investigate his “political opponent” Joe Biden. But each time, he seems to have gotten off without more than a few damning headlines.

“Right now [Trump] is protected by the office of the presidency,” says Asha Rangappa, a CNN legal and national security analyst. The presidency acts like a shield, courtesy of 1973 and 2000 opinions by the Department of Justice, the former following President Nixon’s Watergate scandal. But once Trump leaves office, he could be indicted, Rangappa tells Bustle. It would be a first. Since the country’s founding, not a single former president has been indicted for a crime. After Watergate, Nixon was pardoned by his vice president and successor, President Gerald Ford.

“Where Trump is different is that he's been able to distort our normal processes by breaking norms [and] by crossing lines that we haven't seen crossed before,” Rangappa says. “We're relying on the Biden administration to come in and basically do an audit, not just on the president's actions, but also what may have been covered up.” Biden, for his part, has said he will not pardon Trump. (Could Trump pardon himself? “It would end up being litigated,” Rangappa says. “[But] if his pardon is declared invalid, then he's screwed.”)

Here are just a few of the criminal and civil cases that could follow Trump outside of the White House.

Since last year, Manhattan’s district attorney, Cyrus Vance Jr., has been probing Trump’s finances, both personal and business. This includes the alleged “hush money” paid to two women regarding alleged affairs with Trump, according to Politico. Because the payments were intended to keep the women from talking during the 2016 campaign, they would have violated campaign finance laws. However, Politico reports that the probe may be looking into financial crimes well beyond those alleged payments, according to court filings from the district attorney in August.

“Pardon power only extends to crimes against the United States,” Rangappa says. “So any state or local jurisdiction that is investigating Trump could charge him for anything.”

Accusations That Trump Is Profiting From The Presidency

Trump has faced multiple lawsuits for profiting off the presidency, which is illegal per the Emoluments Clauses of the Constitution. The Supreme Court allowed one such lawsuit against Trump, brought forth by Congressional Democrats, to be dismissed. Separately, the attorneys general of Washington D.C. and Maryland have an ongoing lawsuit against the president that alleges he’s illegally used the office to turn a profit by receiving funds from foreign governments via his hotels.

At least two women who’ve accused Trump of sexual assault, out of 26 sexual misconduct allegations, have also filed defamation lawsuits against him. In one such case, brought forth by journalist E. Jean Carroll, the U.S. government tried to substitute itself as the defendant. A U.S. district judge refused to allow the swap, so the case should move forward, according to Reuters.

Evidence Of Trump's Obstruction Of Justice

In Special Counsel Robert Mueller’s March 2019 report and subsequent hearing, Mueller never explicitly stated that Trump obstructed justice in the Russia investigation. But he did allude to it. “I’m not saying it’s out of the ballpark,” Mueller testified when questioned about Trump’s attempt to interfere with the investigation. The New York Times reported that Mueller didn’t make direct accusations in part because of Trump’s presidential immunity but that he presented evidence for other prosecutors to work with.

“Any prosecutor could review their work and determine whether to prosecute Trump for obstruction of justice,” former federal prosecutor Renato Mariotti wrote in an op-ed for Politico. (More than 1,000 former federal prosecutors, including Mariotti, signed a letter confirming that Trump would have been charged with obstruction of justice if he wasn’t a sitting president.) “There can be no serious question that sufficient evidence exists to charge Trump with obstructing justice, and leaving office does not absolve him of accountability,” he wrote.