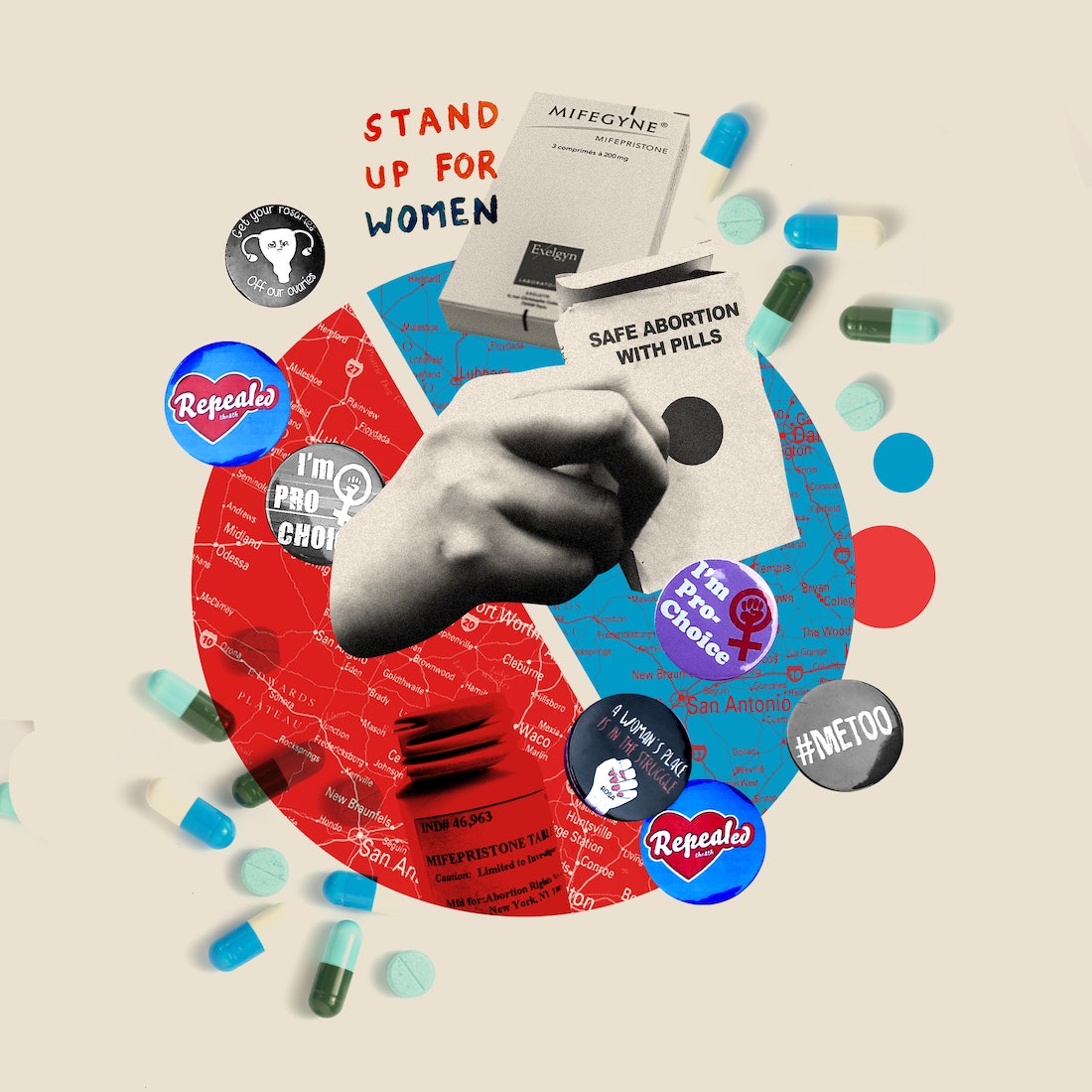 In late August, a woman crept through the library at a university in West Texas, hundreds of miles from the nearest abortion clinic, and gazed at a book, The Bible and the Ballot: Using Scripture in Political Decisions. In her hand, she held a square business card about the size of a condom wrapper. On one side was a comic of two women relieved to have a “Plan C” should either need an abortion. On the back was a QR code and a message: “Save this card in a safe place just in case one day future you (or a friend) needs to become un-pregnant!” The woman slipped the card behind the cover, returned the paperback to the shelf, and left.

In Texas, becoming un-pregnant has gotten a lot harder.

On Sept. 1, the second-most populous state enacted the strictest abortion law in the nation. The procedure is now illegal once a “fetal heartbeat” is detected — a cutoff expected to affect 85% of abortions performed in the state, of which there were 54,000 last year. Texas is deputizing ordinary citizens, including those outside the state, to enforce the law by allowing them to sue anyone for up to $10,000 for “aiding and abetting” a person getting an abortion outside of these terms. That includes doctors, nurses, a friend who helps pay for the procedure, or a Lyft driver who drops a patient off at their appointment.

After the U.S. Supreme Court declined to intervene, the U.S. Justice Department sued Texas on Sept. 9 over the law’s constitutionality. But as it still stands, clinics in Texas have effectively stopped providing abortions after about six weeks gestation, and some have refused to perform any for fear of lawsuits. In the face of this crisis, abortion activists are using informal, guerilla-style means like slipping cards into books to spread awareness of another method that sidesteps clinics altogether: self-managed medication abortions.

The FDA-approved medication — a dose of mifepristone followed by misoprostol 24 to 48 hours later — can end a pregnancy up to 11 weeks gestation. The FDA, which only approves the treatment up to 10 weeks, stresses that the pills must be taken under the supervision of a health care provider. (The agency relaxed its in-person dispensing requirement in light of the pandemic.)

"We believe now, more than ever, people need access to this information,” says Elisa Wells, co-founder and co-director of Plan C, a national group that points patients to providers who prescribe the medications. “[Texas] will be a true abortion desert. That will not stop the need for abortion.” Financed by the National Women’s Health Network in Washington, D.C., Plan C explains the legal risks and is prepared to face lawsuits of its own.

Anti-abortion activists have already built a website soliciting whistleblowers, meaning someone could try to make a legal case against Plan C's Texas staff or volunteers. One such website was downed by TikTokers and coders who choked it with false tips, alleging Marvel Avengers characters and other fictional people were seeking abortions. The long-term implications of the law, though, are hard to judge.

The last time Texas implemented a major anti-abortion law, in 2013, the state slapped strict regulations on abortion clinics and doctors, which forced nearly half of the state’s facilities, roughly 40 at the time, to close. In 2016, the U.S. Supreme Court struck down those regulations, but many clinics did not reopen. “It's a disaster in the making for anyone who is pregnant and doesn't want to be pregnant here in Texas,” Wells says.

Stories of women turning to self-managed abortion are nothing new, says Abigail Aiken, who researches unplanned pregnancies as an associate professor at the LBJ School of Public Affairs at the University of Texas at Austin. As recently as 2015, a woman was charged with attempted murder in Tennessee for attempting and failing to end her pregnancy using a coat hanger. People without access to medical care are also turning to herbs, teas, and supplements, Aiken says, although their effectiveness in ending pregnancies hasn’t been well researched. Others travel to Mexico to obtain the same medications that Plan C is now showing people how to find online.

“Those are the same pills you would get from a clinic, but they’re sourced and used outside the formal health care setting,” Aiken says, noting her research found they were safe taken at home. For those turning to self-managed abortions, it’s often because of long driving distances to a clinic or the pricey procedure costs, which can run into the thousands of dollars.

While Plan C serves as an information hub, it’s organizations like Aid Access, Hey Jane, Abortion on Demand, and Choix that provide the pills. The former, an initiative by Dr. Rebecca Gomperts that’s registered in Austria, connects abortion seekers with providers from around the world who will prescribe mifepristone and misoprostol, which are then mailed from a pharmacy in either the United States or India. The introduction of Aid Access was a “game-changer” for people seeking to self-manage their own abortions, Aiken says. In the two years after the group’s 2018 launch, she’s found that at least 57,500 people in the United States have requested pills by mail through them, with the highest rates of requests coming from states with the most restrictive abortion laws, including Louisiana and Mississippi.

The Texas legislature is trying to ensure mailed abortion drugs aren't the new norm. Last month, lawmakers passed a bill making it illegal for a Texas health care provider to dispense the two medications after seven weeks gestation, and banning anyone in the state from mailing the drugs. Gov. Greg Abbott signed the bill into law last week, per the Dallas Morning News, and the legislation will take effect in December. But advocates for self-managed abortions point to Aid Access’ location outside the United States as a safeguard against the law.

But is ordering the pills online for yourself legal? That's a gray area. The new Texas laws don’t target abortion seekers, but rather the providers and those who help them. “As all lawyers will say when asked a question like this, it depends on the circumstances,” says Sara Ainsworth, senior legal and policy director for If/When/How, an organization providing legal advice and support for abortion seekers. Texas' new law, SB 4, will make it illegal to mail pills, but it does not criminalize the person who receives them. Like a majority of states, Texas doesn’t have laws criminalizing self-managed abortion. But, Ainsworth says, that may not stop individual prosecutors from getting creative with the law to bring forward charges.

Plan C, for its part, is undeterred. In addition to placing 200 cards into library books on Texas campuses, the organization has also taken a four-day road trip across the state to talk with students, and paraded a mobile billboard through some of Texas’ most conservative areas. Their efforts seem to be working.

Interest in self-managed abortions is surging. Google Trends shows searches for the term “at home abortion” spiked the week the Texas abortion ban went into effect, as have searches for “Aid Access.” Despite Instagram twice suspending Plan C’s account before reinstating it, Plan C said its web traffic grew from 500 visits a day to 86,000 in the first week of September. Thirty percent of those visits were from Texas.