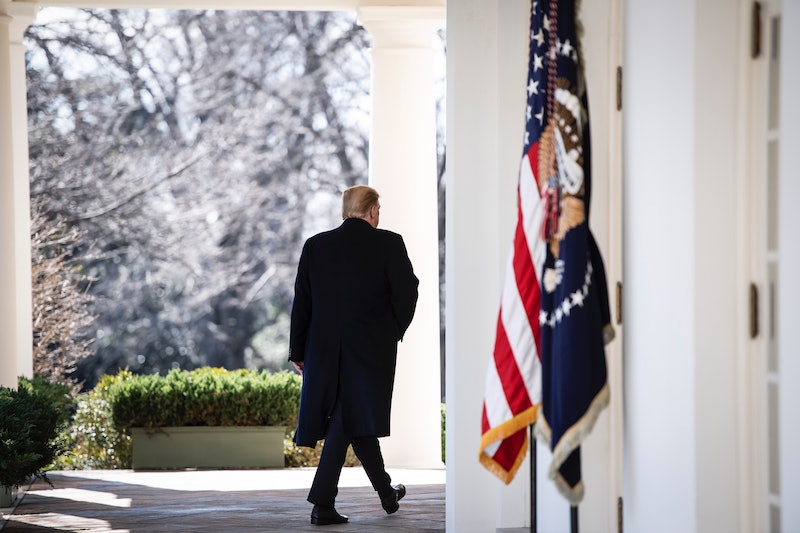 Just days after Joe Biden was projected as the winner of the 2020 presidential election, his team is already making plans for the transition of power, even though President Donald Trump has yet to concede. Trump’s reluctance to accept the results, paired with allusions that he may not leave office, beg the question — when exactly will Trump move out of the White House?

Moving day at the White House is actually a lot like the last day at college: A strict schedule is set, and everyone is expected to follow it to a T. It’s officially called the “transfer of families,” which The Washington Post has referred to as “the five craziest hours in the White House.” The inauguration will be held on January 20, 2021, in Washington D.C. Assuming all goes according to convention, that will also be Trump’s last day as a White House resident. Here’s a quick look at how the move-out process should go.

In the wee hours of the morning, dozens of White House staffers will begin prepping for the day. By this point, the new first family’s favorite products have been procured, and the outgoing family should have finished packing and moved most of their stuff to a new home, according to CBS News. Before the president-elect and his family show up, staffers will take time to say goodbye to the outgoing family.

Past goodbyes have included parting gifts and tears. The Washington Post reported that then-groundskeeper Dale Haney was too emotional to say goodbye to outgoing president George W. Bush, so he took the president's dogs out for one last walk instead.

Traditionally, at this time the president, president-elect, their respective spouses, and VPs meet for a cup of coffee at the White House before both teams head to the U.S. Capitol for the swearing in ceremony, per The New York Times. In 2017, the iconic "side-eying Michelle Obama" meme was born out of this tradition, in which first lady Obama received a gift from Melania Trump.

Once both first families, new and old, are busy with the actual Inauguration, the White House staff begins a frenzied process of simultaneously moving one group in and the other out. Moving trucks will pull up to the White House, carrying both families’ belongings. Because of strict security protocols, only full-time staffers can handle each president’s belongings, reports The Washington Post. That leaves residence staffers of all professions to complete the arduous task of moving boxes.

Cleaning and patch-up work also takes place during this time. Even the temperature and humidity in the residence are adjusted to the new family’s preferences. Major redecorating or construction won’t happen yet. (Personal artwork or decor of the outgoing president will be taken down, but that’s about it.)

Per the Constitution, this is when Biden will officially take the oath to become president. After that, the outgoing president and his family will take a traditional farewell helicopter ride from the Capitol as they return to civilian life.

The chief usher, who is in charge of this high-stakes transition dance, gives the newly reset White House a once-over. Everything has to be in place and unpacked. This includes every article of clothing and even the new president’s toothbrush, Bradley Blakeman, a former deputy for President George W. Bush, told CBS News in 2017.

The new president and first family are expected to return to their new home around now. (This is also when Biden’s White House staff — who'll work with him in the West Wing — will be allowed to enter their new offices.) It’s also the first time Biden will walk into the White House as its chief resident and be greeted as “Mr. President.”

More like this
At 28, Rosie Perez Risked Her Career To Stop Playing Stereotypes
By Gabrielle Bondi
Eurovision Has Been Given A Whole New Look Ahead Of Its Liverpool Debut
By Bustle UK
Pamela Anderson Is Still A Hopeless Romantic
By Ilana Kaplan
Delia Cai’s Small-Town Romance Goes Beyond The Tropes
By Samantha Leach
Get Even More From Bustle — Sign Up For The Newsletter
From hair trends to relationship advice, our daily newsletter has everything you need to sound like a person who’s on TikTok, even if you aren’t.