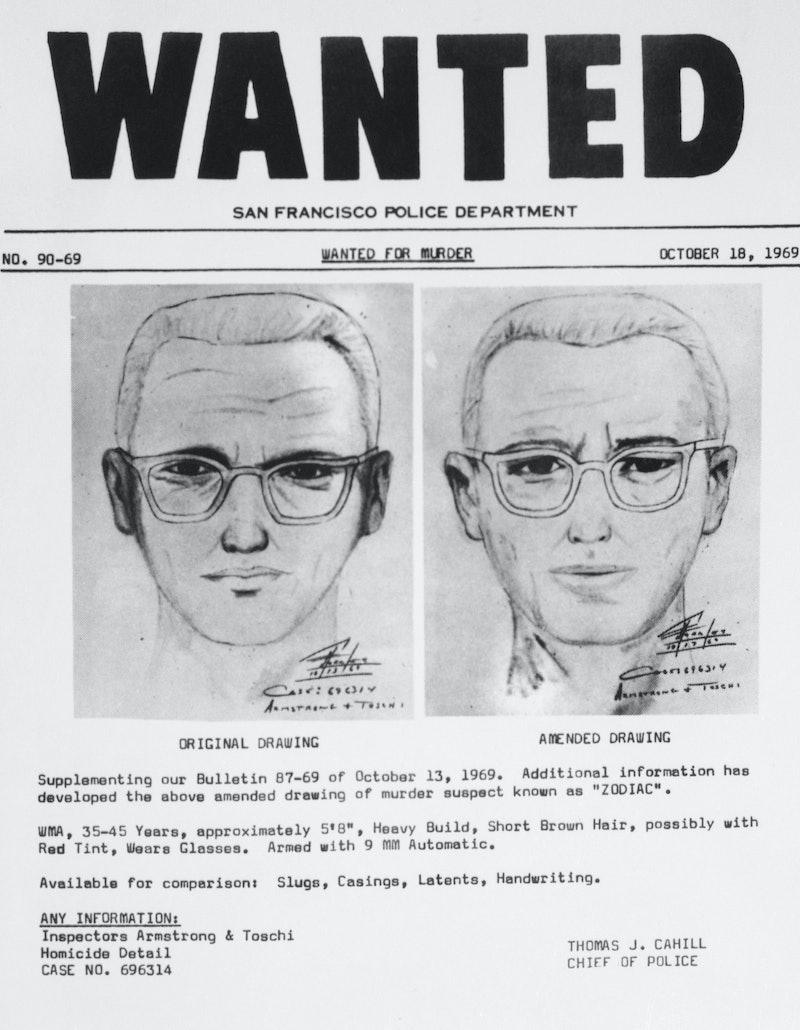 The mystery of the Zodiac killer — named for the cryptic and taunting codes he'd send the media and police — has plagued both professional investigators and amateur sleuths for decades. There are five confirmed murders committed in Northern California between the late 1960s and the early 1970s that are attributed to the Zodiac, but the killer claimed to have murdered 37 people. Now, a team of cold case investigators say they have finally identified the Zodiac killer, Fox News reports.

The Case Breakers, comprised of more than 40 former law enforcement investigators, journalists, and military intelligence officers, have connected the case to Gary Francis Poste, who died in 2018. After years of digging, the team uncovered new forensic evidence and photos from Poste's darkroom. One photo shows scars on Poste’s forehead that match scars on a sketch of the Zodiac killer. Clues from the ciphers the Zodiac included in letters to authorities also point back to Poste, according to the team. In one note, the letters of Poste's full name were removed to reveal an alternate message, Jen Bucholtz, a former Army counterintelligence agent who works on cold cases, told Fox.

In addition to the five murders the Zodiac was previously linked to, the Case Breakers believe Poste killed 18-year-old Cheri Jo Bates on Oct. 31, 1966, in Riverside, California — hundreds of miles south from the area where the other murders occurred and two years before what was thought to be the Zodiac’s first killing. One year after Bates’ death, authorities received a handwritten letter that led them to think the murder may be linked to the Zodiac. However, they received another anonymous letter in 2016 from someone who admitted to writing the earlier note and said it had been a “sick joke.” Police in Riverside told Fox News that they’ve concluded Bates’ murder was not linked to the author of the letter or the Zodiac killer and that her case remains open, but the Case Breakers believe she was Poste’s sixth victim. They said that they’ve tried getting investigators to compare her DNA to Poste’s to no avail.

"The real portion here has everything to do with ego and arrogance," Case Breakers team member Bill Proctor, a former police officer, told Fox News of the Riverside Police Department. "They're not talking about what they have which means that anybody else who comes to the table might have a reasonable argument that an outside organization's information is as valuable, if not more valuable, than what the police department has already done."

The first of the confirmed Zodiac murders occurred in December 1968, when a man and woman were shot dead in a car in Benicia, California. Another man and woman were shot in Vallejo on July 4, 1969, but the man survived. Later that year, a cab driver was fatally shot in San Francisco. A couple was also stabbed near a lake, but the man survived despite sustaining multiple stab wounds. No one has ever been charged in connection with the killings, though there have been plenty of suspects that police investigated.

According to the San Francisco Chronicle, Arthur Leigh Allen has typically been the suspect most closely associated to the killer. However, Allen’s DNA didn’t match the DNA found on the cryptic letters and puzzles the real Zodiac sent police and the media, and he died in 1992.

San Francisco police closed the Zodiac case nearly two decades ago, citing an unmanageable workload. "The case is being placed inactive," San Francisco police Lt. John Hennessey, head of the department's homicide unit at the time, told CBS in 2004. "Given the pressure of our existing caseload and the amount of cases that remain open at this time, we need to be most efficient at using our resources." Police said in the report that the case would be reopened if a “promising lead” ever came in. There have been many people who have claimed to know who the Zodiac killer is, but none have ever produced a compelling enough case to confirm his identity.

Fox News unsuccessfully tried to reach out to members of Poste’s family but did not hear back. The San Francisco Police Department said it was unable to speak about potential suspects in the Zodiac case because it remains an ongoing investigation.

This article was originally published on November 20, 2017