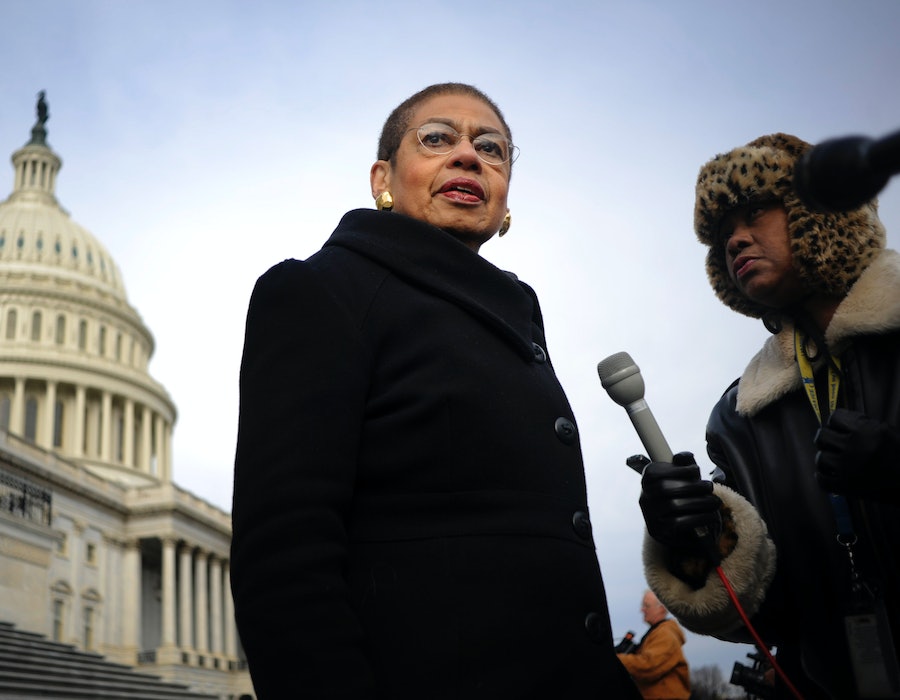 In 1963, Rep. Eleanor Holmes Norton was an organizer for the Student Nonviolent Coordinating Committee (SNCC), the civil-rights heavyweight led, at the time, by the late John Lewis. As 200,000 people poured into her hometown of Washington D.C. for the March on Washington, the then-26-year-old watched, relieved. “The march showed me that if you want to do something big in this country, you've got to act big. You’ve got to think big,” she tells Bustle. By the time Lewis and, eventually, Martin Luther King Jr. took the stage at the Lincoln Memorial, Holmes Norton was standing nearby, watching history happen in real time.

Today the D.C. representative, now 83, is watching as thousands more flock to the capital to honor the 57th anniversary of the March on Washington. This year’s march, titled "Get Off Our Necks" Commitment March on Washington, is fighting for policing and criminal justice and expects 50,000 people.

Rep. Holmes Norton has been in Congress since 1991, representing D.C. as a non-voting delegate and a strong advocate to make the district the 51st state. The congresswoman talks to Bustle about SNCC, Martin Luther King Jr., and the George Floyd Justice In Policing Act.

What do you see as the long-term effects of the 1963 march?

In 1963, there had never been a sizable march. The march essentially inaugurated what has been a set of marches every few years here in the nation's capital, whenever issues become important enough.

Did you have a sense of its magnitude then?

We knew we were undertaking something that had never been done before. The headquarters building in Harlem became almost a 24-hour facility, with people calling, asking for directions, on how to get to buses and trains. I volunteered to be the last person in the Harlem office. I knew I would have to take a plane [to D.C.], but as a native Washingtonian, I could not wait to look out the window of that plane to see if it was successful.

Sure enough, I could see people covering the ground, just waiting to march. And that was fairly early in the morning. I felt relieved. [It] assured me that our efforts were going to be successful.

Where were you during the program?

As a member of the staff, I was on stage at the Lincoln Memorial. The best view was seeing how many people had come, as far as the eye could see.

And what do you remember about the speeches?

Those speeches were spectacular. They were well formed, to the point. And then came Martin Luther King Jr. himself. If you want a final speaker who will lift up a [program], there he was. And of course, his words are quoted to this very moment — "I have a dream," as he said.

My hope is that it will give impetus to the pending George Floyd Justice In Policing Act. The bill was passed through the House. The Senate has passed virtually no bills, except confirming judges, so the pressure needs to be directed to the Senate. I think you march for a reason. You don't march for exercise.