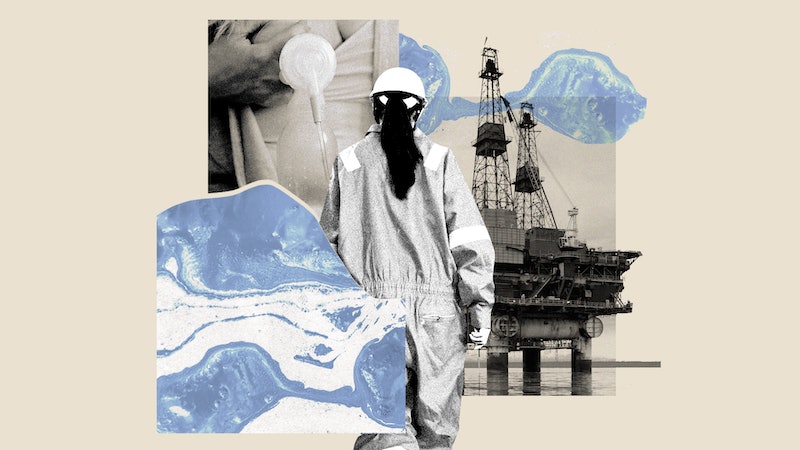 On April 20, the cost of oil fell below zero for the first time. Since then, barrel prices have risen, but the $2.47 trillion industry still expects to finish the year with 40% less revenue than 2019. What does this mean for the 151,000 Americans employed by the oil and gas sectors, especially during a global pandemic?

To oversimplify, the future is uncertain. Women make up just 2% of seafaring crews — with 94% of them working on cruise ships. The job requires spending stretches of time in small rooms, unable to leave, with the same people. “We spend weeks or months out on the water,” says mariner Carrie Norton, 35, who’s aboard a drillship en route for Las Palmas, Spain. “In a way, we’re preconditioned for the quarantined, pandemic life.” Bustle spoke to three maritime workers about the industry, being women within it, and how the coronavirus has disrupted their lives.

Tiffany Woodcock, 33, is a second mate on a drillship stationed offshore of Guyana in the Atlantic Ocean. She's worked in the maritime industry for five years and lives with her wife in Houston, Texas.

Generally we work a 28-day on and 28-day off schedule. Being offshore, we miss a lot of things. But this is the job I signed on for. My wife knows what comes with it. It's not a typical schedule. It's not a 9-to-5 job. But being gone and then coming home, that's one of the best feelings in the world.

My wife and I were in the process of starting IUI insemination to have a kid. We found a donor, and we were very close to going forward with the process. Two days before [the procedure], we got a call from the doctor's office. Due to the first case of a baby being infected with the [corona]virus, they’d postponed upcoming procedures. That was, of course, upsetting. I would have been home for the first month of her pregnancy. We're actually getting started on that process [again], but because I'll be at work, I’ll miss the beginning of it, with few confidants to share information with.

So, as I sit in isolation for a few more days, I know being the only female mariner onboard will have its challenges.

A lot of men view women like, “What are they doing out here? They need to be at home.” One gentleman’s wife would call up to the [ship's] bridge. My fellow female officer answered the phone. [His wife] said, “What's a girl doing answering the phone out there? There aren’t supposed to be any women!” He told us, “You guys basically have the same name. If my wife answers, and there's another girl who answers the phone, she's going to be even more upset.”

The Woman Whose Life Is An Offshore 'Groundhog Day'

Coronado Hickman, 25, is a chief mate on an Articulated Tug Barge, or ATB. Originally from Houston, Texas, Hickman is stationed in the Gulf of Mexico.

My longest hitch before I got on the ATB was over 147 days, doing the same thing every day. A lot of my friends have been talking about being cooped up in their houses. It’s the same thing on the boat. The mental [state] of being in the same place for 24 hours a day, seeing the same thing, the same people, it prepared me [for quarantine]. Mental toughness is different for every person.

When we're ashore, we're not getting paid. Hopefully you have some savings set aside, but it could cause financial stress if you're living paycheck to paycheck. Normally on my time off, I have trips planned and I go out to dinner. To be quarantined in my house was kind of like, "I should have just been quarantined on the boat."

To know that we're carrying [oil], whose stock was going so low, is scary. The only thing that would probably happen at this point is we’d become a storage facility, like we’d take a load of crude [oil] and anchor until the price comes back up and it’s sold. But we’re unionized. If we get laid off, we have our union to fall back on.

The Woman Pumping For A Newborn At Sea

Carrie Norton, 35, is a second mate on a drillship off the coast of Las Palmas, Spain. She's worked in the maritime industry since 2008 and lives with her family in Cape Elizabeth, Maine. She recently gave birth to her second child.

About two weeks into my 28 days, I was told I had to stay on the rig longer. The captain came on the bridge and said, "We really need staff to move this rig safely, and obviously you can leave if you want to leave, but it will be very difficult for us to get crew on because the borders are shut down." The [crew] went both ways. Either they decided, like I did, that this was the safest place to be, or they threw their arms up in the air like, "We're going home. We don't care about the consequences." Obviously our managers were not happy, and it definitely left us short-staffed.

It was the second week of March. I had just given birth to my daughter. It was my second hitch back from maternity leave. I'm still pumping breast milk for her. I keep the last six days of breast milk refrigerated, not frozen. This amount I can safely travel with back home, and if needed, I can freeze it when I arrive.

I only thought I was going to be gone for 28 days. And it's just been a catastrophic hitch, really. Around that time, we also lost a contract because of the [oil] barrel price dropping. Rumors were going around that we were all going to lose our jobs. Obviously I wanted to be home with my new family, and I wanted to help my husband with our 3-year-old and 6-month-old. We did a risk analysis, and my husband agreed that everything was good at home. It would be better, risk-wise, if I didn't travel back. My company kind of sweetened the deal: They said we'd be getting overtime.

When my son and my daughter look at me, they think I'm pretty awesome. I'm hoping they continue to think that, and I try to keep a positive mentality even though a lot of negative things are happening around me.

More like this
Watch Jacinda Arden’s Devastatingly Honest Resignation Speech
By Sam Ramsden
At 28, Rosie Perez Risked Her Career To Stop Playing Stereotypes
By Gabrielle Bondi
25 Inspiring Quotes From Black Women To Celebrate Black History Month
By Kyli Rodriguez-Cayro and JR Thorpe
24 History-Making Black Women You Probably Didn't Learn About In School
By Ayana Lage and JR Thorpe
Get Even More From Bustle — Sign Up For The Newsletter
From hair trends to relationship advice, our daily newsletter has everything you need to sound like a person who’s on TikTok, even if you aren’t.