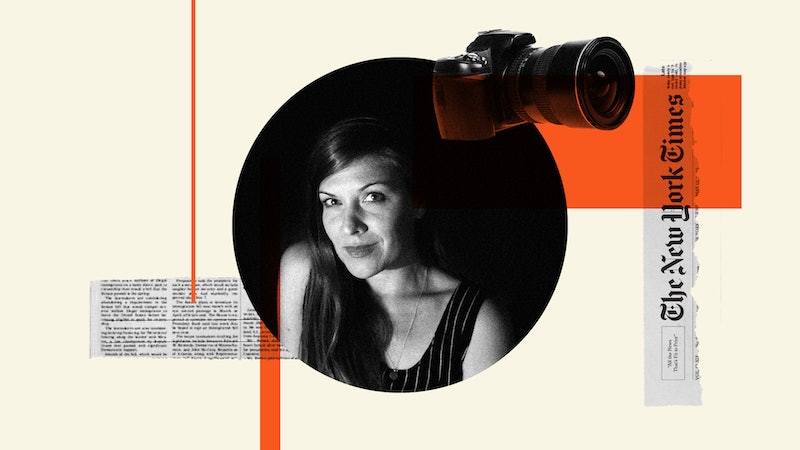 At the University Hospital of Brooklyn, isolation units for coronavirus patients were constructed quickly. They're about 10 feet wide, made of plastic tarp and duct tape. The frosted "walls" of each makeshift room are interrupted by a window of transparent plastic, allowing doctors and nurses to peer in. This window, held in place by uneven black tape, also makes a perfect frame for photojournalist Kirsten Luce.

Photographing a global pandemic has two obvious backdrops: the empty outside world and the chaos within hospitals. In the last two months, Luce has photographed both. She’s captured lonely cherry blossoms in the Brooklyn Botanic Garden and ill patients in intensive care units. She realized she could be among the last people a patient would see before passing. “I knew that the majority of patients I saw would die, and I knew they would likely die alone,” Luce says.

During the coronavirus outbreak, photojournalists are among a select few allowed inside hospitals. Despite years of photographing crime scenes in New York City and clashes between migrants and law enforcement on the U.S.-Mexico border, Luce says this challenge is new, capturing both emotion and turbulence in such clinical settings. Bustle spoke with the New York-based photojournalist, who has been on assignment for The New York Times to document local hospitals.

How did you respond to the request to work in an intensive care unit?

I remember feeling both tense and hyper-alert when my editor asked if I was interested. I live alone, so I knew I wouldn’t be putting anyone else at an elevated risk. I would be paired with a great reporter I really liked, Michael Schwirtz. I could focus on the pictures, and he would do a great job on the story. There was no question that I wanted to do this.

How did you prepare, mentally and creatively?

I went for a masked run. I had to get my head together. I had two Zoom meetings with editors and security experts at The [New York] Times. I told a couple friends but just a couple. I didn’t want to talk about it with people who would worry.

What were some of the challenges you faced while photographing in the hospital?

My main concern was being in the way of the caretakers or making some clumsy mistake that could hinder them. Those fears were assuaged pretty quickly because the nurses were warm and welcoming. It takes a really special person to become a nurse, and these people were no exception.

I was wearing a Tyvek-style suit, which blocked my ears, and two layered masks — N95 with surgical over top — and cheap, plastic safety glasses, so I felt a bit disconnected from my surroundings, like my senses were dulled. I couldn’t hear someone if they walked up behind me, I couldn’t see clearly, and I was paranoid about breaching the seal of my N95 mask. I caught myself holding my breath. It took a few minutes to find my flow.

My primary challenge was that I needed to create compelling imagery that reflected the gravity of the situation without showing patients’ faces. HIPAA laws are extremely strict in the United States, and the last thing I wanted was to create images that couldn’t be published.

Overall, how would you describe your experience photographing the crisis?

It’s been very challenging and disorienting. I’ve covered this city since moving here in 2008. I’ve photographed a wild cross section, from exclusive galas in Midtown to murder scenes in the outer boroughs, sometimes in the same day. Hurricane Sandy was a confusing time. Communications were limited, streetlights were down, and you had to ration your gas. You really had to know your way around to be an effective journalist.

Despite all of this, nothing could have prepared me for COVID. All my instincts are in question. I can’t do what I normally would: approach people, ask questions, use facial expressions, get their names. Whenever possible, I make sure people understand where their image will appear and in what context. Now suddenly I’m trying to shoot from a distance, while I wear a mask and gloves. It’s not ideal.

What’s been the most impactful moment you've captured during this?

I photographed a nurse at the hospital [above] while she was giving an aerosolized treatment — among the highest-risk tasks for a health care worker — to an elderly patient who was unresponsive. She was wearing a huge respiration helmet with vacuum tubes coming out of the back and multiple levels of gowns, which dwarfed her petite frame, making her look like a dystopian astronaut. She was calm and methodical, moving through the steps and adjusting the ventilator. It was clear how fragile we are, and how these workers are only able to mitigate the risk [for themselves]. My emotional reaction to the scene was both fearful and hopeful. Here she is, doing her f*cking best with what she has, but it’s not enough to keep her totally safe.

How did you decompress after the hospital assignment?

Time and memory have been doing funny things to me. I don’t really remember. When I left [the hospital], I felt very tense and tired, even though they were short shoots, about 70 minutes total. I called a couple old friends and talked about inane things, which made me feel grounded. I remember being a bit short with other friends, and I regret that. But it's nothing compared to the health care workers who do this every day.

More like this
Watch Jacinda Arden’s Devastatingly Honest Resignation Speech
By Sam Ramsden
Here’s Where The NHS Nurses’ Strike Currently Stands
By Sophie McEvoy
At 28, Rosie Perez Risked Her Career To Stop Playing Stereotypes
By Gabrielle Bondi
Here’s What Health Means To People In 2023
By Isabella Biedenharn
Get Even More From Bustle — Sign Up For The Newsletter
From hair trends to relationship advice, our daily newsletter has everything you need to sound like a person who’s on TikTok, even if you aren’t.