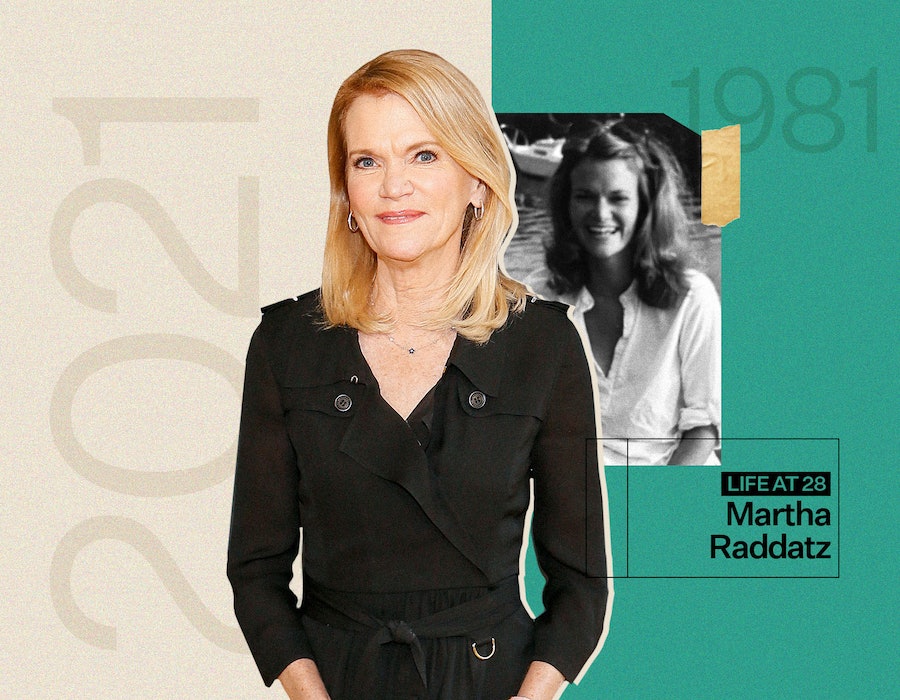 In Bustle’s Q&A series 28, successful women describe exactly what their lives looked like when they were 28 — where they worked, what stressed them out, and what, if anything, they would do differently. This week, ABC News chief global affairs correspondent and This Week co-anchor Martha Raddatz phones in.

At 28, Martha Raddatz was a new mother, working in Boston as a correspondent at ABC affiliate WCVB-TV. She’d reported on air throughout her pregnancy and had subsequently become well-versed in newsroom sexism. Publicly, her station, Channel 5, had pushed a PR narrative that “Five is Family” and promoted reporters’ family lives, but off-camera, Raddatz faced derogatory comments and speculation that she’d soon become a stay-at-home mom. She had no plans for that to happen.

“At the time I thought it was pretty hard to be a mom and have a full-time job,” she tells Bustle over the phone. “But when I look at today, and jobs are truly 24/7, I had it pretty good. I tell the young woman and men [at ABC News today that they’re] juggling in ways that I didn't.”

Raddatz had been in Boston two years, having moved from Salt Lake City, Utah, with her husband, fellow reporter Ben Bradlee Jr. — who shortly after edited the Boston Globe’s groundbreaking investigations on the Catholic Church. (The two separated, and she has since remarried.) “I have often joked that growing up in Salt Lake City, I said to myself, ‘There are sinners out there somewhere and I’m going to find them,’” says Raddatz, who dropped out of college at the University of Utah when she landed a job at a local news station. (“It was a dumb decision, but once I got a job, I figured I didn’t need to finish. I repeat, it was a dumb decision.”)

Since her Boston days, Raddatz, who now lives in Washington, D.C., has been at the forefront of covering important stories such as the Iraq and Afghanistan wars, North Korea, Qasem Soleimani’s 2020 assassination, and stateside political conventions. “[But] the most powerful experience was seeing a book I wrote, The Long Road Home, about a battle in Iraq, made into an eight-part series on the National Geographic Channel,” she says. “I made lifelong bonds with the soldiers, the actors, and crew.”

Here, she looks back on life as a rising broadcast journalist.

I was a correspondent for [WCVB-TV], and it was an amazing station because I’d only been there a couple years when I was 28, but eventually, it took me around the world. It was a local station, but they did a lot of national and international things. I loved every story I was given because I got to travel and see things.

The news business was very different, in the sense that you may be on a call, but it was unlikely you’d get called. So I had pretty regular hours. We had just had a baby. There were a lot of 28-year-olds [in my orbit] who were just starting families. On a Friday night, we’d either hang out with the kids or get babysitters and go out to local restaurants or places to dance, hang out, and party.

What stressed you out the most at that age?

I was pregnant and on the air until the day I gave birth. What stressed me out were the comments. Guys at work said, “She’s never going to come back once she has her baby.” I overreacted to that, which added stress, because I had to prove I could do it. Women have to continue to prove [themselves]. So I was trying to show people that I was a professional and could be as competitive and passionate about my job as the men were and at the same time, go home and “goo-goo, ga-ga out” with my baby and try to be the best mom I could be.

Was there a moment in your career where you felt like you’d “made it”?

When other stations in [Boston] tried to get me to come to their station. Storywise, I never had to suffer through, [or do] “girls’ stories,” as they were called then. I always went in doing hardcore stories.

What were some of your favorite stories you covered?

Boston and politics were fascinating. City Hall was great to cover. And then you had the Kennedy family there, which was always fascinating to cover. I was going, going, going all day, every single day. Most of my friends then were from work. Even today, when I think about my friendships from those years, it’s a pretty profound bond we had.

I didn’t have to constantly prove myself. Just do the work. There’s really nothing more you can do. And don’t worry about the things I told you about, [such as], “Do they think I’m going soft as a mother? Do they think I’m not as competitive as the men?” I wish I’d known that [it] didn’t matter. In the end, I was myself. Nobody’s perfect at everything. You’re not going to be a perfect mother. You’re not going to be a perfect journalist. Never worry about perfection. It just doesn’t happen.

What do you think your 28-year-old self would think of Martha today?

I couldn’t have imagined where I would end up today. I never had any five-year plan. I just liked what I was doing and kept doing it. There was never a moment when I thought, “I don’t like what I'm doing.” There still hasn’t been, quite frankly. When you come from fairly humble beginnings, I think that’s what happens. You’re just grateful. And I’m grateful for humble beginnings because they keep me happier every day.

How do you see the media changing now? How do you think it’s different today for young people starting out now?

Fundamentally, the job is the same. You cover stories, you uncover truth, and you find out as much as you can. You are a storyteller. That’s a fundamental part of journalism that people shouldn't forget. It’s not just gathering facts, [but] organizing those facts in a way that people understand, that people can relate to. Today it’s just a much faster pace.

Some nights, I’m on the news for 45 seconds. You have to narrow that story down and reduce it to the most important factor. Find the lead, be able to grab people’s attention — and I don’t mean in a salacious way — and be good storytellers.

More like this
At 28, Rosie Perez Risked Her Career To Stop Playing Stereotypes
By Gabrielle Bondi
Jessica Simpson On The Time She Was Pursued By A Backstreet Boy & An *NSYNC Member
By The Editors
Hailee Kaleem Wright's Topsy-Turvy Path From MTV To Broadway
By Samantha Leach
At 28, Debra Jo Rupp Was Living A Much Different '70s Show
By Grace Wehniainen
Get Even More From Bustle — Sign Up For The Newsletter
From hair trends to relationship advice, our daily newsletter has everything you need to sound like a person who’s on TikTok, even if you aren’t.