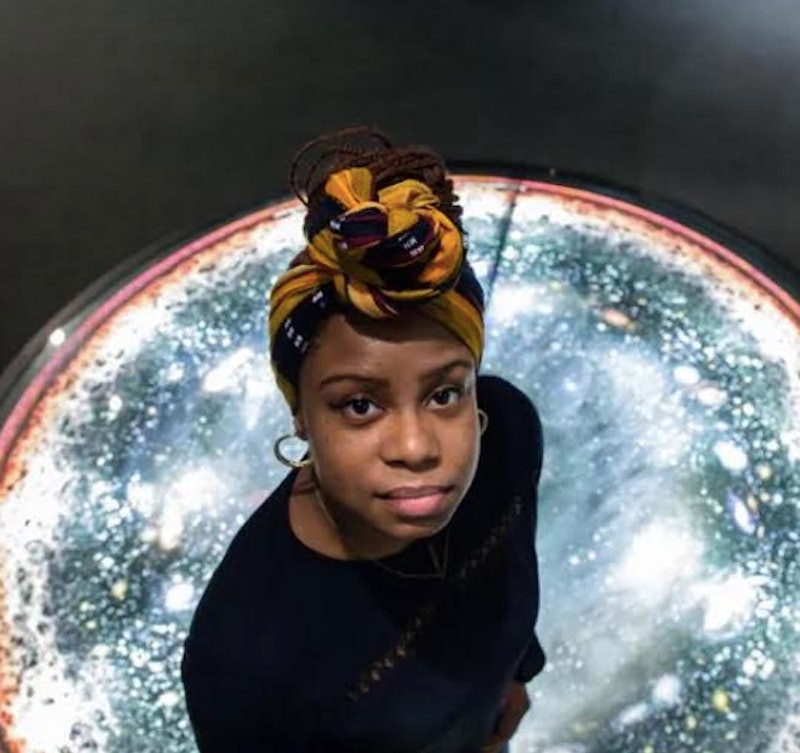 In a big city like Chicago, the cosmos can seem impossibly far away, as residents bustle past brick walls, tall buildings as they go about their lives. But for astrochemist and STEM activist Ashley Lindalía, the Windy City ignited her passion for the stars. Today, she studies the chemical composition of celestial bodies, using advanced astronomical technology to probe into the mysterious icy atmosphere of Saturn’s largest moon, Titan — while amplifying the voices of women of color in her field.

Lindalía is a native of Chicago’s historic Englewood neighborhood. As a child, her uncle gifted her a ruby-red telescope and she used it to “look at the Moon,” she recalls, from the window of her childhood bedroom. She loved visiting the Adler Planetarium with her family, situated on the shores of Lake Michigan, and fondly remembers an exhibit that allowed people to see their weight on different planets. Lindalía also points to her high school chemistry, biology, and earth science classes as professional sparks, underscoring the need for robust science programs in public schools.

Still, a career in astronomy wasn’t on her mind when she began studying business at City College of Chicago. “I wanted to be a background dancer and choreographer,” she reveals, adding that her dream was to choreograph for Beyoncé. After changing her major to forensic chemistry, she was awarded a STEM scholarship to Chicago State University where she finally settled on astrochemistry — becoming CSU’s first student to study the subject via an independent study research program.

Her ambition is as endless as the universe itself. “I decided one day that it would be cool to intern at NASA,” Lindalía says, remembering how she sent in an application to the agency after she graduated from CSU. Her dream came true in the summer of 2020, when she was selected to work as a research assistant at the NASA Goddard Space Flight Center. “I made an affirmation come true,” she said upon receiving her acceptance letter. “It was a really happy day,” Lindalía says. She has worked with both cutting-edge and tried-and-true technology in her research. Lindalía explains that a planet’s atmospheric composition can be discovered with a spectroscope, a device that splits a body’s incoming light into specific color signatures that indicate the presence of elements like hydrogen, oxygen, and carbon.

For many people, especially BIPOC women and nonbinary folks, there are many barriers to a STEM career. Mathematics can be intrinsically difficult for many students who aren’t taught its practical applications. “I was very lucky to have professors and instructors who took the time to explain [math] to me,” says Lindalía.

She views activism as just as important to her work as studying the planets. Lindalía notes that for many women of color, there are precious few STEM role models for young girls. “The only person that we had to look up to, in terms of women in color, was Dr. Mae Jemison,” she says (Dr. Jemison was the first Black woman to fly a manned mission into space). To increase representation for BIPOC women in these fields, Lindalía started the Twitter accounts @BlackInAstro and @BlackInChem. She uses social media to boost theses and dissertations from other women, spotlight their achievements, and most importantly, mentoring and communicating with budding scientist BIPOC girls.

Lindalía knows that there’s a lot of work left to do. To date, she says that “there are about 100 Black women with Ph.Ds in physics and physics-related fields” — a shocking number — and “in astronomy and planetary sciences, there’s only 23. It’s a classroom size!” Those statistics could seem disheartening, but Lindalía is encouraged by the success of her online activism. She regularly gives talks to the media and schools about the importance of diversity in STEM fields, and urges her “white counterparts to step up and do the work.”

Lindalía’s future shines bright. As technology improves, the hazy glow of planetary atmospheres comes into focus, and she’s excited to learn more about “planets like Pluto and other icy bodies like [Saturn’s moon] Enceladus.” She also wants to be at the forefront of exoplanet atmospheric discovery — and with her tenacity and ambition, we’ll be looking forward to seeing her name in the skies.

More like this
Romance Authors Are Mobilizing For Reproductive Rights
By Natalia Perez-Gonzalez
Bimini, Tia Kofi & More React To Cherry Valentine’s Death
By Catharina Cheung
Stormzy Made A Passionate Speech About The Importance Of Diversity
By El Hunt
Women Around The World Are Cutting Their Hair In Solidarity With Mahsa Amini
By Darshita Goyal
Get Even More From Bustle — Sign Up For The Newsletter