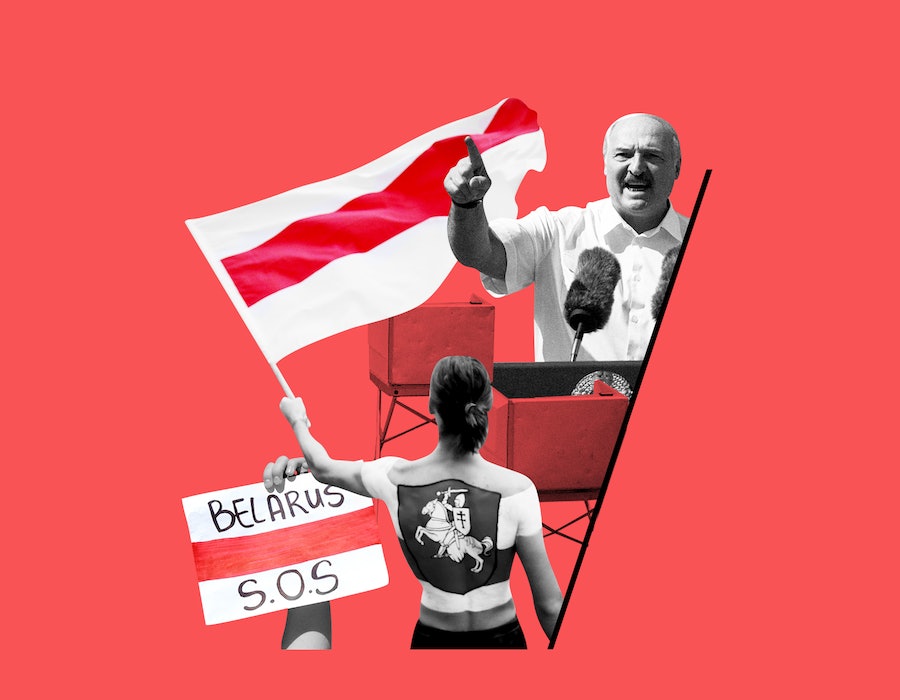 In the past month, protests have erupted in Belarus after President Aleksandr G. Lukashenko claimed a landslide reelection victory. Roughly 200,000 people have taken to the streets of Minsk, the capital city. The announcement crushed a historic campaign by Svetlana Tikhanovskaya, a woman with no political experience, who had aimed to lead the country toward a more democratic future.

The number of international protests may seem hard to follow, from calls for autonomy in Hong Kong to demands for racial justice in Minneapolis following George Floyd's death. It’s not in your head: 2020 has been a hotbed for global civic engagement. The Carnegie Endowment for International Peace’s Global Protest Tracker counts 18 active movements around the world. And the continued Belarusian demonstrations are the country's largest ever, and carry international ramifications. Here's the gist.

Where Is Belarus, Exactly?

Belarus is an Eastern European country between Poland and Russia that used to be part of the Soviet Union. Belarus declared independence from the Soviet Union in 1991. A new constitution followed in 1994, the same year Lukashenko was first elected. Two years later, the constitution was altered, giving him more power, including the ability to rule by decree, which means he could make unilateral decisions without being checked by other government branches. It’s considered a marker of fascist, non-democratic governments, and part of the reason why Lukashenko is sometimes called “Europe’s last dictator.” (For more information about the relationship between Belarus and Russia, check out The Daily's recent episode.)

What Are People Protesting In Belarus?

In the country’s Aug. 9 elections, Lukashenko won with nearly 80% of the vote. Belarusians and Western observers believe the election was rigged. His overwhelming victory is suspicious, considering an April poll found that only a third of Belarusians trusted him. Immediately after results were announced, Belarusians took to the streets in Minsk, and a week later, the movement grew to roughly 200,000.

Protestors want Lukashenko to resign, and to restore a democratic government. Tikhanovskaya had promised free and fair elections, the release of political prisoners, and the reinstatement of the country’s original constitution.

Opposition had been growing for months. Throughout the summer, protesters have been seen holding slippers, a symbol of how they hope to squash Lukashenko, whom they’ve likened to a cockroach. He's been criticized for his handling of the country’s coronavirus response, and for arresting his main political opponents earlier this year, including Tikhanovskaya's husband. (She's since fled Belarus because she believed her family’s safety was at risk.)

How Has Lukashenko's Government Responded?

In the week following the election, security officers responded with violence. Videos show officers beating, kicking, and dragging protesters in Minsk. Thousands have been arrested and detained, and experts from the United Nations have received 450 reports of them being tortured and raped.

The president controls the country’s television stations and media, and his government has reportedly blocked more than 50 outlets that had been reporting on the unrest. He's also had journalists detained, and police have allegedly attacked international news crews.

Despite the response, protests continued through August. A women’s march occurred on Aug. 29 in the country’s capital, where several thousand women called for Lukashenko to step down. On Aug. 30, which also happened to be Lukashenko’s birthday, protesters continued to march through Minsk to his palace, demanding he “go away.”

That's the ultimate question. So far, no major policy change has resulted from the protests, and Lukashenko refuses to step down. However, strikes have rocked key industries, and pressure is mounting from the international community. Several U.S. officials have criticized the Belarusian government’s lack of election transparency and violent crackdown on protesters.

"We will not relent," Tikhanovskaya told the European Parliament's Foreign Affairs Committee from Lithuania. "We demand to respect our basic rights. We demand all political prisoners be free."