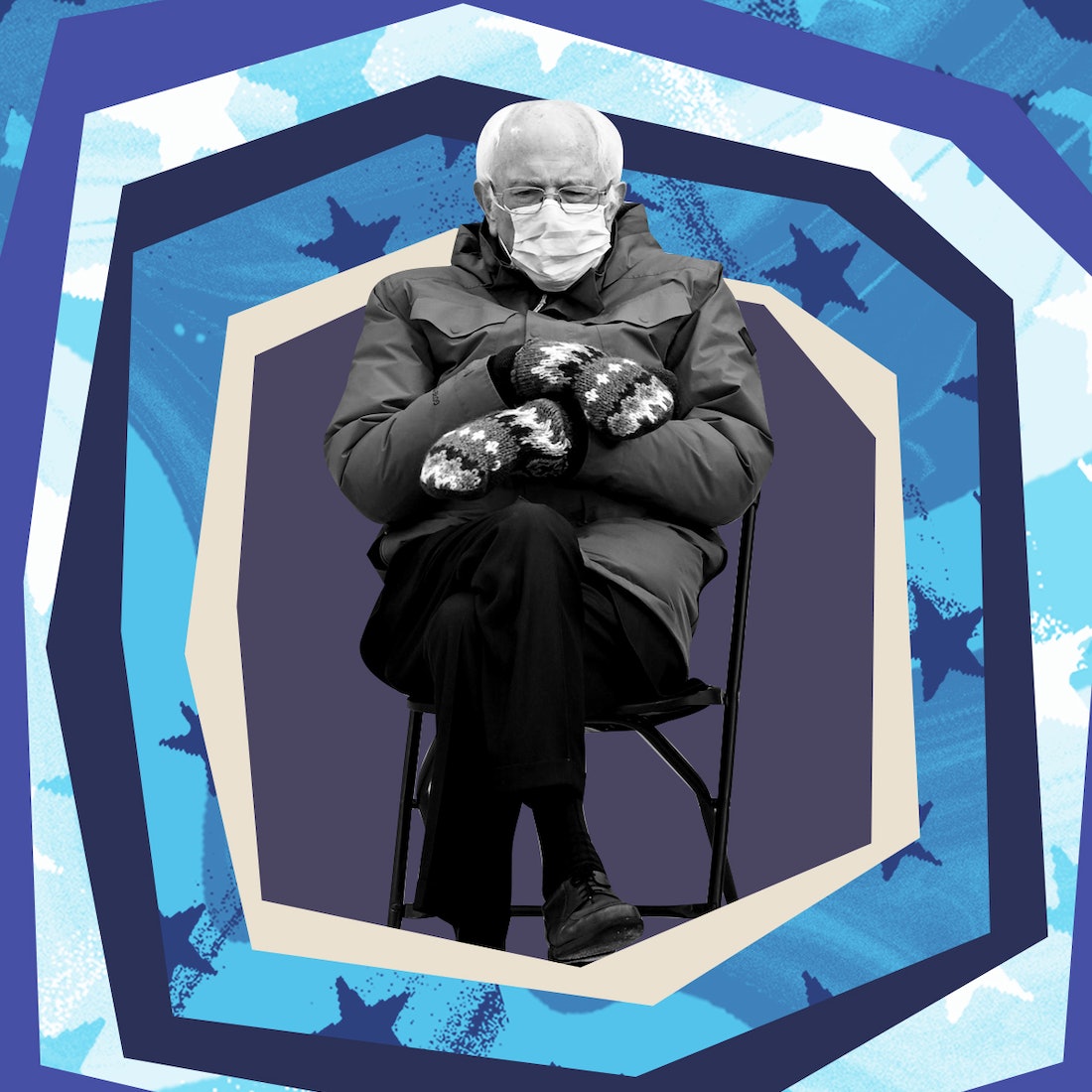 COATS! That was my girl squad’s takeaway from last week’s Inauguration Day. The delicious array of jewel-toned, long-tailed, tailor-made wonders that bedecked each of January 20’s first ladies. There was First Lady Dr. Jill Biden’s neoliberal Buy From A Small Business coat. There was Vice President Kamala Harris’ I Solemnly Swear To The Royal Republic For Which It Stands coat. Amanda Gorman’s I Know Why The Caged Bird Cries Freedom coat. Jennifer Lopez’s Entrepreneurial Mob Wives coat. Michelle — looking like her maroon coat tails were going to wing into a burning phoenix any moment, waist cinched, belted for the X-Men gods.

But, a week out, it’s obvious that the First Ladies of Coats are not going to be how Inauguration Day 2021 was remembered. That the real MVP of Coats that day was Bernie Sanders’ mittens. On Sunday, I was scrolling through gifs to send the perfect “Michelle Obama 2021 coat” image to send in a congrats text to a friend... there was not a meme to be seen. But mittens, mittens were everywhere. Bernie’s mittens have made meme cameos in everything from the Lady Gaga/Beyoncé bop “Video Phone” to Marina Abramovic’s “The Artist Is Present.” Memes from my favorite gluten-free biscuit spot. They’ve also raised $1.8 million for charity.

I love Bernie Sanders mitten memes. As pop art, as metaphor, as moral compass. In a moment of exhaustion and uncertainty, those mittens were the only ones who channeled our national grief. To be clear, Sen. Bernie Sanders was simply giving us Sen. Bernie Sanders. Giving us “uncle at a family gathering in a blue surgical mask.” A no-fashion statement. His arms and legs folded. Wondering why the heck we are at Red Lobster in the first place.

Bernie’s practical winter wear underscored that the inauguration had never felt more like a spectacle, like a tool of political distraction. Lady Gaga, with her bright gold bird brooch and red skirt as wide as a cake topper, was channeling a Capitol celebration the night before The Hunger Games. And there were some definite The Crown vibes in the regal color palette of the “good guys” on Inauguration Day. As if the return to capital-d Democracy Americans voted for was a return to the gorgeous spectacle of the Obama years: regal, rich, and respectable. When, in fact, most of us were voting for something much simpler: protection from the coronavirus and its economic fallout. When Michelle Obama’s bespoke black gloves fist-bumped Kamala Harris’ cold bare knuckles, I wanted to have all the feels. But it’s cold outside. I could only ask myself: Why are none of these people wearing mittens? Why does no one here seem prepared?

As much as I “oohed” and “awwed” at the range of jewel-toned coats, I was reminded that I had little use of a coat this year — I barely leave my house.

There was something a little politically tone-deaf about using such a precariously peaceful transition of power as evidence of victory. So many Americans can’t leave their homes. They can’t see their loved ones. Or they have lost them. Where was that “small celebration” Biden had called for? Where was the recognition that “back to business as usual” was completely impossible? What should stick out right now is not the ostentation of a pair of homely, worn-in, woolen mittens sewn by a New England school teacher. What should stand out to us is the garishness of all this pageantry. As much as I “oohed” and “awwed” at the range of jewel-toned coats, I was reminded that I had little use of a coat this year — I barely leave my house.

I’ve read a lot of articles describing the intention of the women’s fashions at the inauguration, particularly Kamala Harris’ wardrobe choice of the color purple to symbolize unity. I get it — if you put the colors of the American flag in a Vitamix you just might get an immaculate, queenly purple. But I use my Vitamix every morning. And unless I’ve sprung for the expensive fruits in my Hello Fresh order, I’m much more likely to get a less regal — but equally American — color: Vermont mitten brown.

The mittens of Bernie Sanders. Defenders of Democracy. Portents of our Future. Protecting the hands of a gentle, outspoken leftist over 65 on a pandemic Inauguration Day. A man who risked his life to be there. The only person we feel truly showed up to represent us. The Mittens were a reminder this is gonna be a hard year. A hard, cold year. One in which we’ll be inevitably frustrated by the new administration’s attempts to feed us pretty ideas about bipartisanship when what we promptly need is a stimulus check. A week after the inauguration, we have not let the mittens memes die yet because they may be the only ones holding the new regime accountable for the sorrow they are already trying to cover over. It’s a simple lesson. We can’t see America beautiful until we get the people warm.