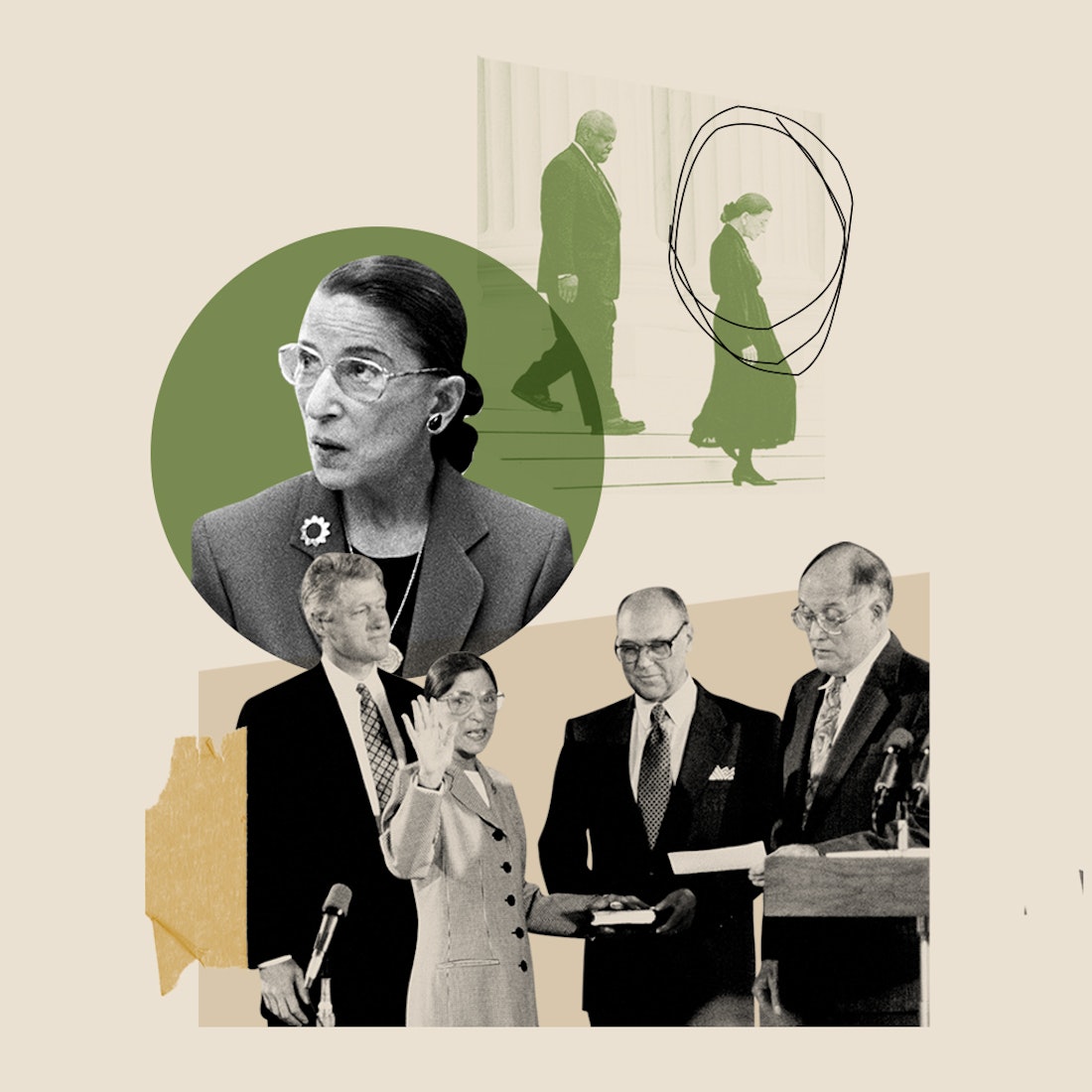 We’ve long since established that time means nothing these days. But still, the 24 hours after Ruth Bader Ginsburg’s death was announced Sept. 18 felt like an eternity. By the time I found myself standing next to two little girls in black robes and lace collars at an impromptu courthouse memorial the next evening, I’d cycled through multiple emotional stages over the loss of the legal pioneer, who was a rule breaker and a rule maker all wrapped into one.

Some were predictable stages, of course — shock, even though no one should really have been shocked by the death of an 87-year-old metastatic cancer survivor who had been gravely ill for weeks. Rage, as our president immediately seized the opportunity to say he’d fill the seat (double rage three days later when he invented the lie that Justice Ginsburg’s deathbed note, asking that she not be replaced until after the election, had actually been written by politicians, not dictated to her granddaughter Clara). And fear, because so many of the decisions and breakthroughs Ginsburg fought for — like the already tenuous right to reproductive health care — now hang in the balance with our 5-foot-1-inch defender out of the picture. Ginsburg had built equality “brick upon brick,” one of her ACLU colleagues recalled that weekend. That brick house had, of course, been shaky for years (she’d been unable to stop the gutting of the Voting Rights Act in 2013). Now it felt like it was crumbling altogether.

And then there were other emotions. A sense of personal loss, for one thing — not because I’d known Justice Ginsburg, but because she’d always reminded me of my own mother, born three years after Ruth Bader just a mile away in Brooklyn. Like Ginsburg, my mother defied rigid social expectations to get herself to grad school at Harvard, and then into a professional world that was hostile to women, especially those with children. (In my mother’s case, it was science, not law, but the raised eyebrows and the job demotions and the hidden pregnant belly were the same.) For me personally, RBG had always felt familiar, even though her successes were so exceptional. Like so many women, I was drawn to her marriage to Marty (“my best friend and biggest booster”), a rare example in her generation of a very high-profile woman whose marriage still flourished. My own divorced mom never found her Marty, but when I looked at RBG I saw the world that she should have had — the partnership, the grandchildren, the nights at the opera. When it was reported that the justice — already in her 80s — was shopping at the Watergate CVS with coupons in her pocketbook, I thought of my own mother’s chronic thriftiness and felt a warm rush of recognition.

But even the heroic, rule-breaking Ginsburg, the one who spoke unapologetically about abortion rights at her confirmation hearings, was so much more than a sassy mainstream empowerment symbol.

I grew up professionally in the '90s and '00s, watching Ginsburg in awe as she opened door after door via SCOTUS decisions like United States v. Virginia (where she clarified that male-only admissions policies were a violation of the 14th amendment). But I only met her once, and that day replayed in my mind all last Saturday. In 2012, the magazine I edited, Glamour, named the justice a Woman of the Year. She came to New York to accept, and we met in my office that afternoon (where I fangirled over her awkwardly) and then again at Carnegie Hall at night (same). Her speech that night covered everything from opportunity for women to how annoying it was that court robes are cut to accommodate men’s suits — Justice Ginsburg found them boring to wear.

Afterward, at dinner, she sat in a banquette with her friend the legal journalist Nina Totenberg and entertained a long string of actors and writers and athletes and guests paying their respects. Pictures that evening show Ginsburg patiently tolerating most of them — but she is beaming at and leaning in to a conversation with the young activist Erin Merryn, a survivor of child sexual abuse who was working to change state laws across the country. “What you are doing is remarkable,” Merryn remembers her saying. When Supreme Court journalist Dahlia Lithwick wrote in Slate last weekend that at her own recent interview with Justice Ginsburg, the justice addressed most of her remarks to Lithwick’s 20-something colleague, I thought of that moment, and of the justice’s enthusiasm about younger women ready to change the law and the world.

Oh, and by the way: Later that night, Ginsburg took home a swag bag we had gifted to all the winners, featuring — among other things — the Banana Republic lace bib necklace that would become her “dissent collar.” She wore it frequently during the stretch when she issued a record-breaking number of dissents from the bench — and also, of course, the day after Trump’s inauguration. (Obviously, this is one of my proudest career achievements.)

Let’s not forget the fact that most of the adulation of RBG happened over the last seven years, while she was generally in the minority.

That collar dominated Instagram last Saturday. There it was, on memes, on mugs, in artwork. I went to a Rosh Hashanah lunch, and both my 25-year-old cousin and my 79-year-old father-in-law had RBG T-shirts on. And I began to feel a new, creeping emotion: discomfort. Were we talking about a human person and serious pioneer or a you-go-girl caricature, sold on Etsy? The actual Ginsburg, as many have written, was a more complicated figure, who ruled in mixed ways on tribal sovereignty issues and whose dismissal of Colin Kaepernick’s choice to take a knee (“it’s really dumb”) still stings, despite her apology. But even the heroic, rule-breaking Ginsburg, the one who spoke unapologetically about abortion rights at her confirmation hearings, was so much more than a sassy mainstream empowerment symbol. She was a careful legal bricklayer who meticulously laid the foundation of equality in our justice system, and a woman who rarely gave in to anger or emotion. Besides, the fights she fought were not easy or necessarily popular at the time: Today it looks obvious that women should be able to get credit cards while married, or to serve as administrators of estates just as freely as men, but that kind of gender discrimination was widely accepted. It took painstaking work and more than the badass drop of a gavel to make it illegal.

Don’t get me wrong — I love that I live in a world where people are dressing up as female Supreme Court justices for Halloween. (It beats another sexy witch.) Let’s just not gloss over the real work that made her iconic to begin with. And let’s not forget the fact that most of the adulation of RBG happened over the last seven years, while she was generally in the minority. (That was her dissent collar, after all!) The unfortunate truth is that while we were admiring her, the courts were swinging rightward. But popularity is not the same as victory, so let’s keep going — toward a world where women don’t just break the rules but make them, creating a justice system written from our point of view rather than eloquently protesting someone else’s limited vision.

Long-term victory will, of course, take all of us. Which brings me to yet another emotion, experienced while standing at that memorial: hope. There we all were, after years of turning out for protests and memorials and rallies and school strikes — and as an important P.S., “we” were not just women. Men were there in high numbers, which is noteworthy only because several years ago they might not have been. In 2017, at the original Women’s March, I rode down to D.C. on a packed bus of only women; no one asked “Where are the guys?” because it was assumed that feminist action was for the ladies, and even the best of guys were home, as mine was, sending wishes from afar and watching the kids. But last year I ran a half-marathon to raise money for abortion clinics with a mixed team of women and men, and no one batted an eye at the men’s Running for Choice shirts. We’re starting to slowly come around to understanding the obvious: Gender equality helps both genders.

Obviously Ginsburg’s legacy extends far beyond gender equality — she won overdue freedoms for LGBTQ+ people, helped protect DACA, and more. But to the extent that she is a feminist icon, it was gratifying to see men showing up for her.

Ruth Bader Ginsburg knew that from the start. Many of her most successful and legally momentous cases in the 1970s were fought on behalf of men — a male Air Force spouse who had been denied the benefits that military wives got; a father whose wife had died in childbirth petitioning to receive the Social Security support given to widows. (That father testified at Ginsburg’s confirmation hearings two decades later.)

Even abortion rights — one of the causes women associate most with her and one of the liberties already eroded nationally despite her vigorous support — benefits men as well as women. (I once wrote for The New York Times about how my own ability to end a pregnancy had made the rest of my life possible; but the boy I was dating at the time, a college student with zero desire to become a father, could have written the same piece.) Obviously Ginsburg’s legacy extends far beyond gender equality — she won overdue freedoms for LGBTQ+ people, helped protect DACA, and more. But to the extent that she is a feminist icon, it was gratifying to see men showing up for her: a reminder that not all feminists are women. (Just as not all women are feminists, despite the “Notorious ACB” shirts the Senate is trying to sell painting Judge Amy Coney Barrett — the nominee for Justice Ginsburg’s seat and a legal enemy of workers’ rights and health care — as the RBG of the right.)

That first night after Ginsburg’s death, I walked home from the memorial with a neighbor and her friend, a woman who’d strolled two miles to the courthouse carrying an enormous paper-mache gavel with a lit-up RBG on it. (Freaking heavy; I tried carrying it. Crafty people are amazing.) A car slowed down to pass us. “Hey!” yelled a guy leaning out the window. “Who’s RBG?”

“Ruth Bader Ginsburg, from the Supreme Court,” said my companion. “She just died.”