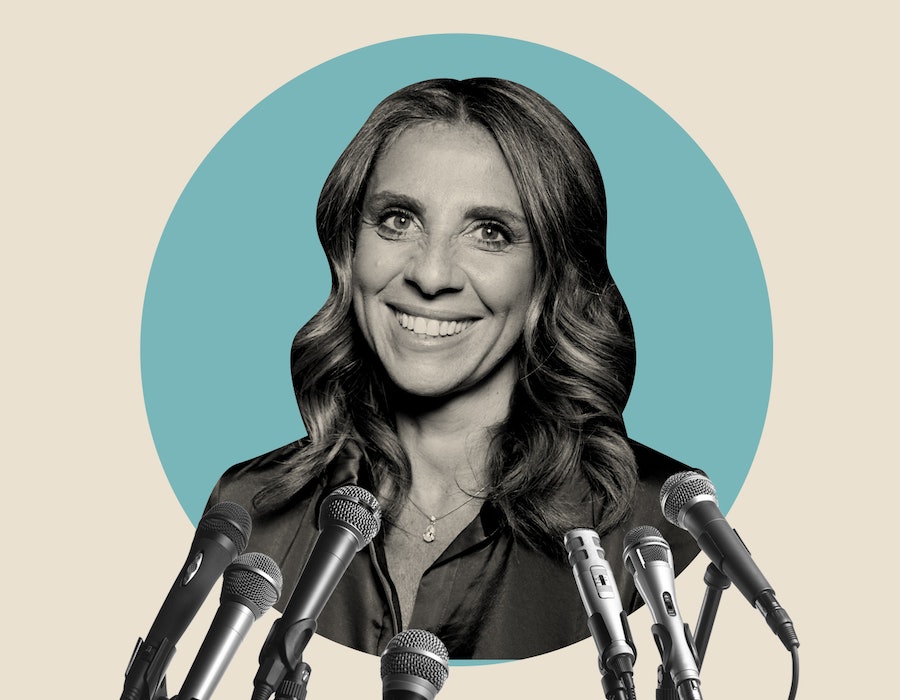 In Bustle’s Quick Question, we ask women leaders all about advice — from the best guidance they’ve ever gotten to what they're still figuring out. Here, Facebook VP EMEA Nicola Mendelsohn CBE shares her thoughts on valuing your time, ripping up the ageist rule book, and breaking through tech’s glass ceiling.

Speaking with Nicola Mendelsohn feels slightly surreal. She is, after all, one of the most important figures at Facebook, responsible for operations across Europe, the Middle East and Africa.

But Mendelsohn is warm, down to earth, and open, and the initial intimidation I felt quickly melts away. She describes herself as a “Manchester girl,” having grown up there before going to university in Leeds and eventually moving down south for a graduate scheme. This scheme was the beginning of a 20-year career in advertising, but she moved over to Facebook eight years ago, where her official title now is VP EMEA.

Mendelsohn credits two generations of working women in her family for her go-getter attitude. She grew up watching her grandmother run a fabric stall in Manchester’s Arndale Market and her mother co-run a catering business with her father. “It was unusual then to have both a mum and a grandma working,” she tells me. “So I got to see from an early age that you could run a business as well as having a family.”

Below, Mendelsohn speaks more about managing work with family life and her other best career advice.

You have always been an advocate for maintaining a healthy work-life balance; what are your top tips for women trying to do the same in 2021?

First of all I hate the word balance — because I just think it makes it seem as though something’s up and something’s down!

For me, it started with a realisation I had when my eldest was born. When she was about one, I just felt like I wasn’t doing anything very well; I wasn’t being a good wife, a good mum, I wasn’t being very good at my job. And I took a step back and thought: what could be different? At that point, I asked whether I could do a four day week. It had never been done at the company I was at, but I was lucky I had supportive bosses.

My advice would be to make sure that you value your time, because a woman’s time is just as valuable as a man’s, but we often see women taking on all the extra responsibilities both at home and in the office, arranging things.

How do you get through tough days at work?

But language really matters here. I try and encourage myself and my team members to have a protagonist mindset. You can come into a situation and think everything’s terrible, and make yourself spiral down, or you can say this is a challenge, and these are the ways I could address it. People get really down when everything feels overwhelming, and that’s when I think the spiral happens and you feel out of control.

Tech is still largely seen as a male-dominated space. What has your experience been and what advice would you give to young women hoping to get into this industry?

It can be pretty depressing to think about the fact that the tech industry isn’t actually a very old industry, and yet, very quickly it polarised to become something men went on to do and women didn’t.

I have always found Facebook to be incredibly open and welcoming, but also concerned enough to put measures in place to encourage women not only to join, but to thrive here. I’m actually very proud of the fact we have increased the amount of women five times over, in five years, globally.

But the real problem we have is that only 35% of STEM students coming out of higher education are women. And this is not good, because we all know that companies that are diverse actually perform better; they have more engaged employees and they retain their people. So my advice is to encourage young girls to study the STEM subjects at school and university, as it starts right there.

What would you say to someone who’s worried they’re not achieving as much as their peers?

The world is full of so many exciting journey’s! I think about some of the most successful women I know, and their greatness came later on in life. Vera Wang, for example, one of my favourites, didn’t start her fashion label until she was 40! And we are seeing more and more esteemed business leaders running these big organisations in their 50s and 60s. So rip up the rule book and remember we are all on different paths.

I would recommend practising vision-writing to plan your goals, where you start the year by planning the year ahead in three buckets: family, work, and community. So you write it as if you are in a year’s time looking back on what you will have achieved. Evidence says you are 42% more likely to do something if you write it down and share it with people.

What is one of the biggest challenges you have faced so far in your career, and how did you overcome it?

The biggest one was being diagnosed with an incurable blood cancer back in 2016, Follicular Lymphoma. Because I wasn’t ill, I didn’t see it coming.

I had never heard of Follicular Lymphoma [before I was diagnosed], so I took the time to research it. I didn’t have treatment straight away as there is no benefit to treating it early like other cancers. So I ended up going back to work, which was a massive challenge, because on the one hand I didn’t look any different, but I was having to think about all of this. I was so grateful to work at a company where there were leaders like Sheryl Sandberg, who could give me very clear practical advice.

It really made me see our products differently too; I joined a group called living with Follicular Lymphoma to connect with other people, and we have now grown that group to over 7,500 people, and I am a co-admin of the group. And it couldn’t have happened without Facebook.

That gave me the courage to set up my charity, the Follicular Lymphoma Foundation [which is currently running a baking competition to raise awareness about the condition], which I did about 18 months ago, totally focused on finding a cure. So it was a big curveball and challenge, but I’m hoping something good will come from it.

More like this
Savannah Guthrie Got Her First-Ever Tattoo With This Former Wild Child
By Suzanne Zuckerman
This Is When Netflix Is Going To Start Charging You For Sharing Passwords
By Darshita Goyal
This Wordle Rival Is Taking Social Media By Storm
By Sam Ramsden
Bachelor Zach’s “Dream Job” Has Nothing To Do With His Work In The Tech Industry
By Brad Witter
Get The Very Best Of Bustle/UK
Sign up for Bustle UK's twice-weekly newsletter, featuring the latest must-watch TV, moving personal stories, and expert advice on the hottest viral buys.