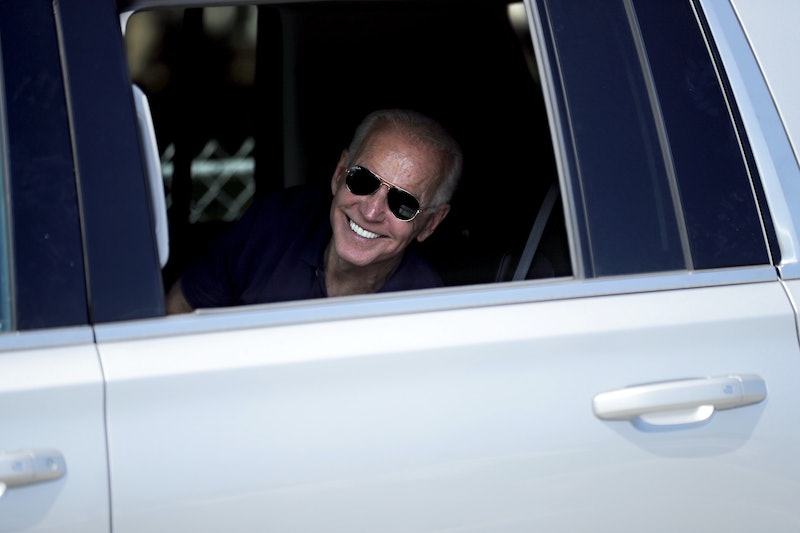 When President Donald Trump and former Vice President Joe Biden walked onto the stage at Belmont University in Nashville, Tenn., for the final 2020 presidential debate, their accessory choices spoke volumes. Put simply, Biden entered wearing a mask. Trump did not. The debate, fittingly, kicked off with the two candidates answering how they will handle the COVID-19 pandemic as the country heads into a "dark winter," in Biden's words. At the time of the debate, more than 220,000 people in the United States had died from the coronavirus, and more than 8.4 million people had been infected. When the moderator, NBC News' Kristen Welker, asked Trump about his future plans to confront the virus, he talked about his "very fast" recovery. Biden, during his unmuted two-minute response, talked instead about the widespread loss and sacrifice within the country.

Throughout the evening, their responses and policies — or lack thereof — were just as divergent as their decisions about masks. Sprinkled throughout were standout lines, some biting and others just bizarre.

Trump didn’t hesitate to speak about his own COVID-19 diagnosis, promising Welker that a vaccine is coming soon. "I can tell you from personal experience that I was in the hospital. I had it. And I got better," he said. "And I will tell you that I had something that they gave me, a therapeutic, I guess they would call it, some people could say it was a cure. But I was in [the hospital] for a short period of time and I got better very fast or I wouldn't be here tonight. And now they say I'm immune.”

Biden, however, insisted that Trump has forfeited his right to lead the nation due to his administration's response. "Anyone who's responsible for that many deaths should not remain president of the United States of America," he said.

On responding to the virus:

“I’m going to shut down the virus — not the country," Biden said when asked about whether he'd order more lockdowns. "It’s [Trump's] ineptitude that caused us to shut down the country in large part.” Trump responded, “I want to open the schools ... We have to open our country or we’re not going to have a country.” He then returned to a sentence he's used before: “The cure cannot be worse than the virus itself.”

Health care is at the forefront of the conversation this year. On Nov. 10, the U.S. Supreme Court will hear oral arguments for California v. Texas, a case in which the court will decide whether a part of the Affordable Care Act, known as Obamacare, that requires Americans obtain health insurance is constitutional. If ruled unconstitutional, it could leave millions of citizens uninsured.

“I’d like to terminate Obamacare [and] come up with a brand-new, brilliant health care [plan],” Trump said. “We have 180 million people out there that have great private health care … Joe Biden is going to terminate all of their plans.” (Biden wants to build on the Affordable Care Act, not terminate it.) Biden responded, “He's a very confused guy. He thinks he's running against somebody else. He's running against Joe Biden. I beat all those other [Democratic candidates] because I disagreed with them."

According to Trump, his administration is “trying very hard” to reunite 545 children with their parents, from whom they were separated at the southern border. “Children are brought here by coyotes and lots of bad people,” he said.

Biden countered, “These 500-plus kids came with parents. They separated them at the border,” he said, indicating fault with Trump's administration. “I’ve made it very clear [that] within 100 days I’m going to send to the United States Congress a pathway to citizenship for over 11 million undocumented people. And all of those so-called Dreamers, those DACA kids, they’re going to be immediately certified again to be able to stay in this country and put on a path to citizenship.”

Welker described "the talk" that many Black parents in America have with their children in order to ensure their safety against police brutality. Biden credited his daughter, social worker Ashley Biden, for educating him on racial relations. “I never had to tell my daughter if she's pulled over ... for a traffic stop, put both hands on top of the wheel and don't reach for the glove box,” he said. Republicans, including Vice President Mike Pence, have denied that systemic racism exists in this country. Biden acknowledged it plainly and powerfully: “There is institutionalized racism in America.”

Trump then claimed that nobody has done more for the Black community than him, except maybe President Abraham Lincoln. "I’m the least racist person in this room," he said, unironically. Biden responded, "This guy is a dog-whistle about as big as a fog horn."