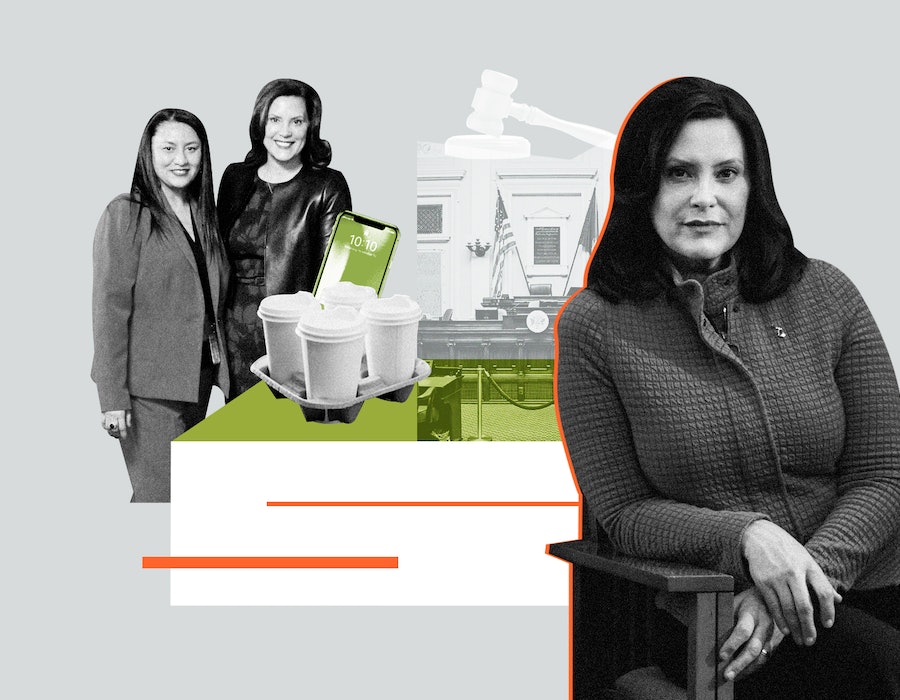 In "Deskside Confessionals," Bustle speaks with assistants to the stars, CEOs, and cultural tastemakers. What does a real-life Andy Sachs do to decompress, juggle projects, and bond with the boss? This week, tune in for a fireside chat with the executive assistant to Michigan Governor Gretchen Whitmer.

Angel B. was born about two miles away from Michigan’s capitol building in Lansing, a post-industrial car town that's been making an honest Midwest comeback of late. Now decades later, she works in that iron-domed skyliner as the executive assistant to Governor Gretchen Whitmer, who's gained national notoriety for her coronavirus response — and Trump's criticism of it. (In a May poll, 64% of Michiganders supported Whitmer's measures. By early July, Michigan’s curve was gradually flattening from its April peak.)

“The very first time I watched her speak to a group, I was awed,” says Angel, who previously worked as an executive assistant for Consumers Energy and former governor Jennifer Granholm’s administration. “She immediately relates to people. I had goose pimples." When Whitmer took office in January 2019, ushering in the first all-female statewide ticket, Angel was by her side. "We turned the lights on together, so to speak."

She talks with Bustle about their unwritten language, throwback candy habits, and exercise bonding.

She had my resume in front of her and said, "Well, hey, tell me about yourself." She must have already looked at [it], so I gave her a more personal background. I felt a connection immediately, and comfortable talking with her. She's a great listener.

Do you remember any questions she asked?

She did say, "What's your favorite place in Michigan?"

I had to give out a shout out to New Buffalo, Michigan. It’s a fun little spot in the southwest corner.

Back in Lansing, what did a regular workday entail, pre-coronavirus?

Normally we'd be in the office. My day [would start with] running through the calendar to make sure nothing had changed, making sure the materials she needed for meetings were ready, and preparing for guests — and Zoom calls now, of course. She and I would meet in the morning around 8ish to run through the day.

If her schedule changes on a dime, how do you notify her?

We’ve evolved our own unwritten language. It could be a nod. It could be a, "Hey,” [or] I’m giving her a high-five up, [meaning] I need five minutes. I could write a Post-it note. If I've got to walk with her to the next meeting, I'm walking with her, I'm on the elevator with her, I'm in the car with her.

What’s the main way you two are communicating now?

Text, phone, and email. We do see each other when we go into the office for press conferences.

In April, armed protestors stormed into the Michigan capitol. What was that day like?

We weren't there. We had a full day, business as usual. We just trudged through it.

It all sounded very stressful. What’s the most challenging part of your job?

Keeping her to the allotted time for each meeting. People don’t realize how valuable her time is. She run[s] a state of 10 million constituents.

Does she have any pet peeves?

She follows the motto, “If you’re on time, you’re late.” It's not just her time — it's other people's time that can get infringed on.

Do you keep snacks around the office?

We don’t always have time for lunch, so we keep some around. She enjoys [Atomic] Fireballs on occasion, and I love flavored Tootsie Rolls. Green ones are my favorite.

Do you have any hidden talents?

I run marathons and do triathlons. I’ve done half an Ironman. I've done several Olympic- and sprint-distance triathlons, and run several marathons and many more half marathons. I love it.

Jeez Louise. What about the Governor — any hidden talents?

This actually goes back to my interview with her. At the end, she asked, "Do you have any questions?" I said, "Just one. What do you like to do for fun?" She said, "Well, I have a Peloton, and I love to ride my Peloton bike." It sealed the deal for me. I'm like, "We can work together, for sure."