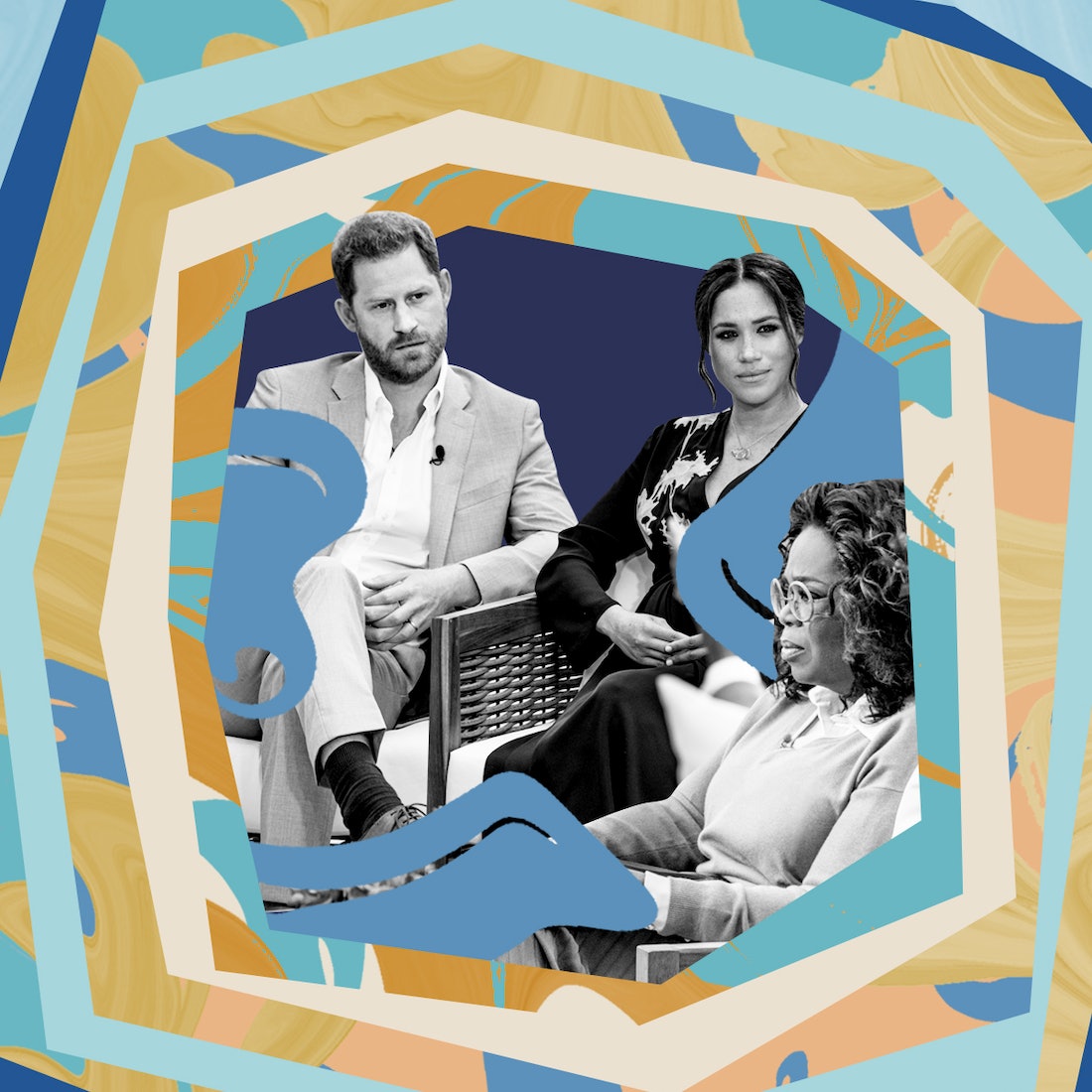 My favorite moment of Oprah Winfrey's sitdown interview with Meghan and Harry, Duke and Duchess of Sussex, was the sh*t. The brief moment when the royal couple brought Winfrey back to the chicken coup on their Santa Monica compound and, surrounded by feces and feathers, chatted about what excites them most about their new life. “Just being able to live authentically,” the duchess said, radiant, “Getting back to basics.” The duke, meanwhile, squatted in the dirt, trying to hand-feed disinterested hens while squinting in the California sun.

In an interview focused on Meghan’s supposed shortcomings as a royal, there was something beautiful about watching Harry struggle — authentically — with a chore of the simple life. It was the chickens for me. Because I know firsthand that the difficulties of multicultural, international, mixed race partnerships go both ways, though they differ greatly in intensity.

Nearly a decade ago, I moved back from across the pond with my own “prince” in tow. We were not royals. But I was a Black girl who grew up in Kentucky and my husband was an uber cosmopolitan Dutchman. He proposed to me on the grounds of the Royal Estate in South Holland. We got married in the United States — he wore a replica of the Dutch Prince Johan Friso’s wedding outfit when we exchanged our vows at a sunny, outdoor ceremony in Brooklyn Bridge Park — then he whisked me off in a plane to be a housewife in his home country. It was hella fairy-tale-romantic. It was also incredibly hard.

Much like the royals, we ended up back in America two years after our nuptials. I’d given my solemn vow to make his culture and customs my own, and I tried, but if we had stayed I might not have made it out alive. Although, prior to our wedding, my husband had spent a ton of time in America — particularly with me and my friends in Harlem — and before meeting me living abroad in Brazil and Australia, the transition to “basic” American living was difficult for him. About two-and-a-half years into our marriage, two months into our return to the States, he came home from a pickup basketball game with his face completely bloodied.

“Don’t scream,” he said to me as he walked in from the courts in his football kit. Of course I screamed. His tooth was coming through his lip. “He’s got a great jump shot,” one of his new American buddies told me, “but he kept trying to block the ball with his head, like he was playing soccer.” And it wasn’t just sports injuries. Everything from the accents to the restaurant tips befuddled my husband. He used to feel savvy and sophisticated canvasing the world as an international tourist — mailing me letters from Machu Picchu while we were still dating, planning our one-year anniversary Nicaraguan backpacking trip — but as an American he felt completely inept.

The insecurities my husband sustained trading in his privileged European status for more rustic American living were no match for the injustices I suffered in his home country — as his Black wife.

“I feel like a farmer here,” he would sometimes say. We lived in Indiana, across the street from corn fields, and we kept tomatoes behind chicken wire in our backyard. But he wasn’t saying that he felt rural living in America. He was saying he felt alien. “Farmer” meant awkward and uncomfortable. It was his way of saying how unhappy he was with who he’d become.

In the end, my husband and I didn’t make it. Our divorce was a good decision; we each needed a world in which we could be our authentic selves and we couldn’t pick one. But seeing how much my husband struggled, some people asked me if we would have been better off had we stuck it out in his home country. The answer is, absolutely not.

Much as Prince Harry recalled to Oprah, my husband discerned that the insecurities he sustained trading in his privileged European status for more rustic American living were no match for the injustices I suffered in his home country — as his Black wife. Those of us who have such partnerships expect the stereotypical hurdles. Like, the first gift my future in-laws sent to my parents was a box of blackface licorice. Yes, blackface licorice. My Bible Belt mom immediately discarded the gift, calling it “demon candy” and believing them to be pagan witches. I didn’t have the heart to tell her that the face-shaped candies depicted Santa’s slaves, part of a Dutch Christmas tradition. Explaining that truth felt so much worse.

Insensitivity is one of the obvious discriminations that people of color face in multiethnic relationships. But the more insidious, and harder to account for, problem is relinquishing your freedom to another country’s racism and misogyny because you choose to join your partner in their homeland.

When I moved to the Netherlands in 2010, it was in the midst of a turbulent time in which Geert Wilders came into power as the leading political voice of the Dutch government. An anti-Muslim, anti-immigrant predecessor to Donald Trump and Boris Johnson, Wilders spent a lot of time on the news giving propagandic speeches about the Dutch returning to a pure race. “I’m with Wilders!” one of my neighbors proclaimed, though her own mother was Irish and her granddaughter was a brown-skinned girl whose father was Eritrean and Moroccan.

A country that once prided itself on its liberalism, Holland in the 21st century felt like stories I’ve heard of 1950s American segregation. I was stopped by a man walking home from the bus because he assumed, as a Black woman walking alone, I must be a prostitute. White cashiers in grocery stores refused to touch my hand when they gave back my change. The concerns Meghan Markle expressed about her mental health in the Oprah interview felt viscerally real to me. It reminded me of the time, seeing no way out of my life abroad’s compounding brutality, that I called an American Suicide Prevention Hotline, my husband sitting just outside the doorway to our bedroom, wanting to give me privacy but scared to leave me alone. I visited a Dutch shrink. “You’re not depressed, you’re just lonely,” she told me brusquely, and tried to prescribe me pills for a medication I had already informed her I had adverse reactions to.

Family members had been welcoming, and excited about the fresh perspective I brought to their lives, but they were not crazy about the way I highlighted the country’s rampant discrimination.

Wilders’ platform of xenophobia and imperialism continued to attract supporters, a bellwether of Brexit and Trump rallies. Although my Dutch family members had been welcoming, and excited about the fresh perspective I brought to their lives during our courtship, they were not crazy about my outspokenness as a family member, the way I highlighted the country’s rampant discrimination. I shifted in their eyes from quirky to petulant.

As troubled as racial politics are in the United States, in the Netherlands, Black Dutch people are nearly invisible in public forums. I never saw anyone on television airing their grievances with the country’s racial problems. In fact, most of the people of color I knew in the Netherlands were still officially documented as nationals of their parent’s country of origin, even if they had never lived in any other place. This is not America, was the response I got from my Dutch family and acquaintances.

But it wasn’t a simple case of homesickness. Over the course of my two years as an emigrant, I lost the use to my international driver’s license, the option of opening my own bank account, and the ability to travel in the European Union without my husband, largely because of the Dutch government’s presumption that I might use these rights as opportunities to immigrant runaway-bride. The travel restrictions I learned about the hard way, returning on a cheap flight from a long weekend in Ireland, a girls’ trip with my best friend from college. The border patrol agent wanted to take me into a security screening room, claiming I had violated the terms of my marriage visa. I’d never heard of these restrictions before. My friend thought he was cute and flirted with him; he let me off with a warning.

Throughout those years, my husband grew increasingly aware of the perils that being a Black woman brought to my time abroad. Cultural adjustments are one thing; constant threats are another. We made plans to move back to America as soon as I’d completed enough language lessons to apply for dual citizenship, which would have taken about three years. But those hopes were dashed when, a year-and-a-half after our wedding, the Dutch administration started toying around with requiring anyone who applied for Dutch EU citizenship to give up their national passport, including Americans. I refused to entertain the possibility I might not be able to go home one day if something happened to my parents or sister — and so did my husband. We started explaining all of these things to my Dutch in-laws over family dinners, at least eight months before we decided to leave the country. Each time, I was in tears; my Dutch mother-in-law sympathized with my pain but her only advice was, “You need to grow a thicker skin.” I think she meant a different one.

Again, I wasn’t royal. My ex-husband and I were not rich, nor celebrities, and we hadn’t yet decided to have any kids. We went through the awful things the U.K. press tries to refute in Meghan’s story when they attack her credibility. We went through all this as kids from two countries who fell in love and got married. Regular, basic, people. Can you imagine all the sh*t Harry and Meghan have been through?