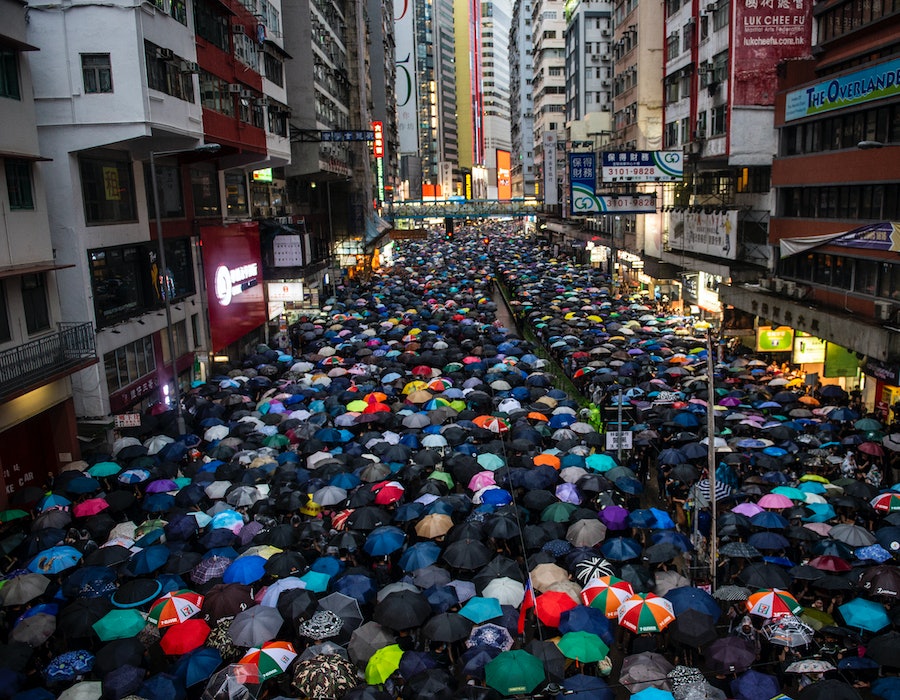 In most parts of the world, there's nothing inherently political about umbrellas. But in Hong Kong, where pro-democracy activists have protested for years, the rainy-day accessory symbolizes proletariat solidarity, allyship, and democracy.

Hong Kong was granted semi-autonomy from China when it shed its British colonial rule in 1997, and its residents were given protected rights, like freedom of speech. Since 2014, however, people have hit the streets to argue that China is whittling away at Hong Kong’s legal standing. Last summer, those peaceful protests devolved into violence, and on June 30, the government enacted a sweeping new security law, which gives law enforcement the power to apprehend anyone vaguely "endanger[ing] national security."

Police have used tear gas, water cannons, and rubber bullets against demonstrators. Journalists have been arrested, including media tycoon Jimmy Lai, who is a vocal critic of the Chinese government (the Chinese Communist Party or CCP). The government has responded by calling for “law and order,” and referring to protestors as “rioters.”

Throughout it all, umbrellas have become a surprise hero. They can obscure identity, be used as makeshift barricades, and protect against tear gas. Some U.S. activists have adopted their usefulness as well, like those protesting the death of Daniel Prude in Rochester, New York.

“You always bring an umbrella,” says Zoey, a 23-year-old Hong Kong citizen who spoke with Bustle last month. (Her name has been changed to protect her identity.) “It’s crazy to see how many are left lying around [for protestors]. You don’t notice until you need them.” Zoey spoke to Bustle about the new law, disappearances, and color-coded messages.

How did you become involved in the pro-democracy movement?

A turning point was June 12, 2019, the first time officers fired rubber bullets at the kids. I had been to smaller protests, but I went to my first march in July 2019. After that, I've attended protests basically every weekend, and I've never been alone. We’re so lucky to have the freedom of speech, but the arrests have called to attention the fact that our freedom to speak out is slowly being taken away.

They passed the security law this year, on the anniversary of the handover [from British to Chinese rule], and people were scared. We didn’t know what would violate the law. We had no details on it at the time, so we just stayed silent. Normally you would speak out against Jimmy Lai’s arrest, [but now you couldn't].

It puts foreign corespondents in a difficult position. And how has COVID-19 affected the tension?

The police have used social distancing measures to target people they want to arrest — people who look young, like they were part of the protest. They seek out protestors, group them together, and then charge them for violating social distancing guidelines. And the election for our legislative council members has also been postponed for a year.

What experiences have you personally had with the police?

I got a mild head injury in July and saw a girl tackled to the ground by three riot police. When they finally took her away in the ambulance after 45 minutes, we could hear her shouting her name. You have to identify yourself like this, and state that you’re not suicidal. It’s so that your death doesn’t get ruled as a suicide, like so many have. We’ve had so many missing people, people who have disappeared after they got arrested.

The police [incite violence] so casually, they don’t even need to be provoked to use tear gas and pepper spray. You’re just walking past, and suddenly there’s smoke everywhere, you can’t breathe. The first thought is to grab one of the umbrellas and open it up.

How has the new security law changed the protests?

We have a “blue party” and a “yellow party,” yellow being the color of democracy and blue being pro-China [and pro-police]. Since January, businesses have been advertising that they’re yellow. If you’re yellow, you support businesses that are yellow. We’ve created apps like Yelp, but for finding yellow businesses. It’s like a bonding agent — both beautiful, and a little crazy. But since the security law, these apps and ads have been taken down [as preventative measures], because they can be seen as speaking out against the CCP.

I’ve seen this movement divide friends and families. There are people I no longer talk to because I know they’re blue. We have churches who have set up shelters for kids kicked out by their parents for being yellow.

The law sounds like a major blow to the pro-democracy effort. Anything else you’d say to those protesting worldwide?

Well, it is. But it’s been a year, and we’re still fighting. Hong Kong’s gotten a lot of attention. Countries like the Philippines, with similar problems, haven’t always been as lucky. Social media activism is a trend, but it’s also a great way to disseminate information. Also, umbrellas are really accessible.

More like this
Michigan’s Governor Is “Going To Fight Like Hell” To Protect Abortion Access
By Andrea Zelinski
How To Fight For Reproductive Rights, Based On How Much Time You Have
By Courtney Young
The Kardashian Forerunners
By Mariah Smith
At 14, Vanessa Bayer Was Bad At Sports & Lusting Over Jared Leto
By Samantha Rollins
Get Even More From Bustle — Sign Up For The Newsletter