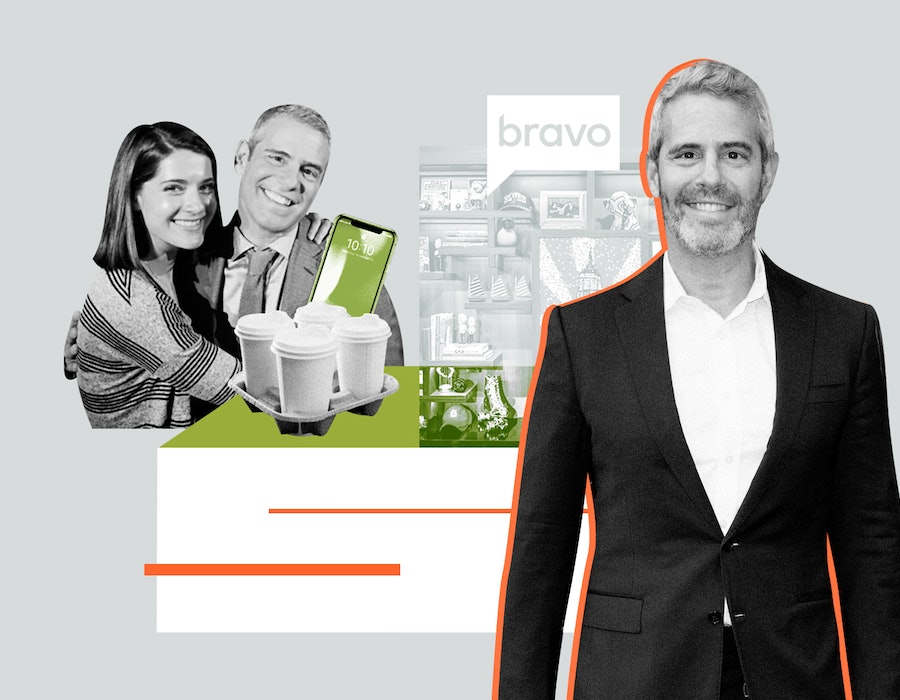 In "Deskside Confessionals," Bustle speaks with assistants to the stars, CEOs, and cultural tastemakers. What does a real-life Andy Sachs do to decompress, juggle projects, and bond with the boss? This week, sidle up to Daryn Carp, Andy Cohen's longtime assistant.

Daryn Carp didn't want to work for Andy Cohen. In 2011, the New Jersey native was part of NBC's selective NBC Page program, following in the footsteps of her idols, game-show hosts Regis Philbin and Gene Rayburn, who’d both donned the infamous page uniform years before. So when her supervisors suggested she apply to assist a Bravo executive, she demurred.

“I didn’t want to be an assistant,” remembers Carp, now 31. She wasn’t familiar with Cohen, she says, and her sights were set on hosting a game show. This sounded like a hard left turn.

Fortunately, she gave in. That March, Carp returned to Bravo's Manhattan headquarters for her fourth and final interview, with Andy Cohen himself, the Real Housewives creator and reality-television mainstay. She offered up some risky interview answers, won the job — and hasn't left. Nine years later, being Cohen's assistant is still Carp's top priority, but she's added a few professional bona fides: She co-hosts two podcasts, Oxygen’s Martinis and Murder and the newly launched Scissoring Isn’t A Thing, and hosts PeopleTV’s Reality Check at 4:30 p.m. Monday through Thursday on Twitter.

What are your main responsibilities with Andy?

Coordinating and making his life as seamless as possible — his schedule, any travel he’s doing. I can rip off his credit card and Social Security number in about two seconds. He’s texted me, "What's my shoe size?" I go, "Look at your feet.” But I'm not picking up his dry cleaning. I'm not getting his coffee.

How has your job changed in the last month?

I’ve been working from home since March 12. Normally I do a 45-minute show, jam-packed with guests. You can't really do [those] in quarantine. It's been a bit more lonesome in my Upper East Side studio. I still talk to guests, but the episodes are shorter. We've been doing 10- to 12-minute Zoom [calls].

How are you and Andy communicating now?

Communicating hasn’t changed. It switches between phone, text, and email. He knows I'm around. I have two phones. I keep my ringers on.

Are either of you big emoji users?

He uses the crying-laughing one all the time. He loves the heart emoji. And I've used the head exploding one when I've been surprised about an interview.

Are your work hours similar to normal?

How did you find out Andy had tested positive for the coronavirus?

I knew he hadn’t been feeling well for a few days, [with] a fever and some body aches. Two or three days later, he texted me, "I just want to let you know I tested positive for coronavirus." He was like, "Are you feeling any symptoms, Daryn?" He was going to help me get tested if I needed it.

What was your reaction?

I was scared and texted him as such. He said, "Daryn, I've got this. It'll be OK." I love him, as a mentor and boss. In the beginning [of the pandemic], a lot of people were flippant and callous about it, probably even me. He's 51. He's fit. For the most part, he’s very healthy. So it became real. It was an, “Oh sh*t” moment.

Thinking back to your interview with Andy, what was your first impression of him?

He gets right to the point. Very quick, very fast-paced. He can juggle 50 things in his head, and I could see that, even in a three-minute interview.

Do you remember any questions he asked you?

First, he looked at my resume. I’d worked at PBS, and they’d let me do stock reports on air. Andy made me do a stock report, ad libbed. I riffed for 30 seconds. The only two questions he asked me were, “What's your favorite Bravo show, what's your least favorite Bravo show, and why?" You're going to be like, "Holy hell, what was this girl thinking?" I said my favorite was Inside the Actors Studio and my second favorite was Millionaire Matchmaker, because it teaches me what to do on dates with women.

He goes, "What's your least favorite Bravo show?" I said, "All the Housewives." To which his jaw dropped. I said, "I don't get it. All these women make so much money, and I don't understand why they're complaining."

No way. What was his reaction?

He couldn't believe the chutzpah. Mouth agape, eyes bugging out. I had literally insulted the man's bread and butter. But I didn't kiss up to him. He knew I wasn't going to bullshit him. For the record, I love all the Housewives now.

What tips have you picked up from Andy about interviewing celebrities?

Be yourself, and listen to what your guest is saying. And not everyone's going to like you. That's OK. When someone's not feeling Andy — Debra Winger, Tituss Burgess — you feel it from the start.

Of the people you’ve met over the years, who were you the most nervous to meet?

Thinking of your work with Andy, what are you the most proud of?

At BravoCon this past fall, Bravo entrusted me to be their correspondent. They put me on air for 19 spots. On the last night, Luann [de Lesseps] was running a little late, and the audience was getting impatient. The president, the head of marketing, and the head of PR asked if I would go up and riff for 20 minutes. And I was like, "Guys, I'm not a standup.” But I went up and said, "Ask me whatever you want about Andy Cohen." For the company to trust me to problem-solve in front of fans, it meant a lot.

Does he have any pet peeves?

He doesn't like when people are late or waste his time. He just wants people to be straight-up with him.

Not necessarily a talent, but a weird thing is that he has the longest tongue in the world. He's rivaling Gene [Simmons].

You’ve been with Andy for nine years. When would it behoove him to find a new assistant?

He doesn't do well with change, and it would be very difficult to bring in someone new. I had to get him Passover ingredients for his Seder plate, and he was like, "I know this is really an assistant thing to do." But I'm family to him. I know his parents really well. I mean, I'm not going to be with him forever. I don't know when that will be, but if the last nine years have been any indicator, we'll communicate effectively, and I know he’ll support my decision.