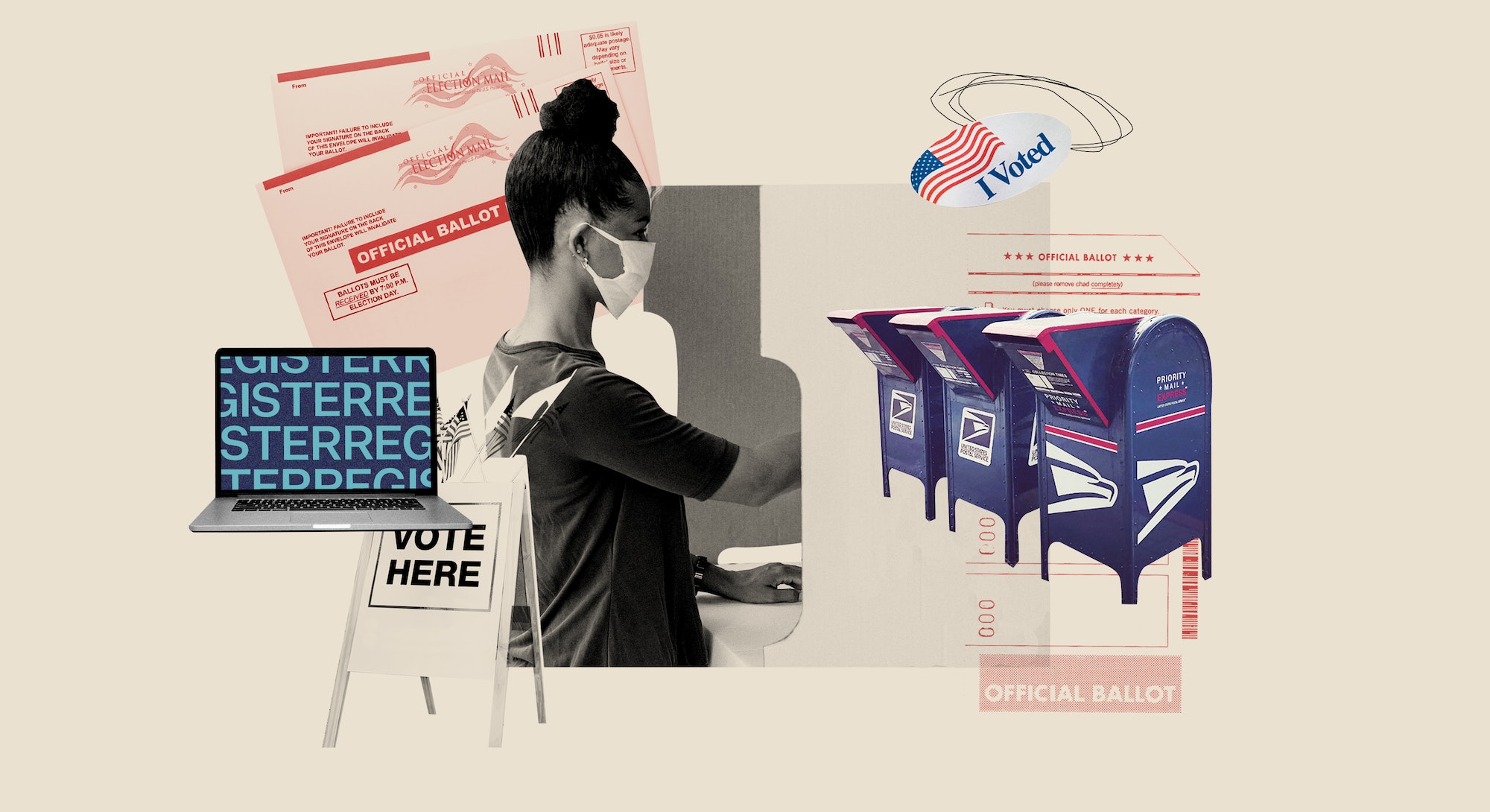 It's been a wackadoodle year for daily routines. People clink happy hour glasses through Zoom, lounge beachside in their CDC-friendly "trikinis," and evangelize the likes of Lysol. And voting in the 2020 election already looks different. For the first time in American history, a majority of general-election ballots are expected to be collected via the United States Postal Service (USPS). According to the New York Times, experts predict that roughly 80 million people will vote by mail.

Some states are already familiar with this. In Oregon and Washington, for example, 97% of voters mailed in their ballots in 2016. Under normal circumstances, the USPS would be ready. During the week before Christmas, it delivers roughly 2.5 billion pieces of First-Class Mail. So 80 million ballots? No biggie.

Or so you'd think. But in a bizarre turn of events, the postal service became the latest government agency to become politicized. In August, the new postmaster general, Louis DeJoy, was under fire for cost-cutting changes like removing blue USPS collection boxes, reducing hours, and dismantling high-speed sorting machines. And President Donald Trump essentially told Fox Business’ Maria Bartiromo that he opposed additional funding to the USPS because it would make widespread mail-in voting possible. (He falsely conflates it with voter fraud.) Now Trump has tested positive for COVID-19, along with a growing number of his White House staff, just a few weeks shy of Election Day.

Which is all to say it's sure to be a wild, weird couple of weeks. Bookmark this page for up-to-date voting information ahead of Nov. 3.

How Do I Register To Vote?

Head to Vote.org or When We All Vote. If you’ve just turned 18 or haven’t signed up before, it only takes two minutes to register. If you have voted in previous elections, make sure your name is still on voter rolls. Since the 2016 election, at least 17 million people have been removed from rolls, either because they've moved or become ineligible. (These are called "voting purges" and are a problem when eligible voters are removed.)

What's The Deadline To Register To Vote?

Every state is different, so head over to Vote.org's state-by-state list.

Can I Change My Voter Registration?

Have you moved within your state or changed your name? If so, you'll need to update your registration. (If you've moved to an entirely new state, you'll need to re-register in that state.)

But Should I Change My Voter Registration If I'm Temporarily Living Out Of State?

If you plan to return to your permanent address, consider requesting a mail-in ballot.

Should I Vote In Person Or By Mail?

It’s up to you! Many people are opting to vote by mail due to the coronavirus, but there will still be in-person voting. “There's no reason why we shouldn't be able to vote, in person or otherwise,” Dr. Anthony Fauci told National Geographic in August. He recommended social distancing and wearing a mask, adding, “Obviously, if you're a person who is compromised physically or otherwise, you don't want to take the chance.”

Do I Need An Excuse To Vote By Mail?

Again, it depends on your state. If you live in Texas, Louisiana, Mississippi, Tennessee, South Carolina, or Indiana, you will need a reason besides the coronavirus to request a mail-in ballot.

What’s The Difference Between A Mail-In Ballot & Absentee Ballot?

They’re essentially the same. Because states administer elections — rather than the federal government — there are different terms for the same thing: advanced ballots, mailed ballots, vote-by-mail ballots, mail ballots. The anomaly is “universal mail-in voting,” which refers to states that automatically send ballots to every registered voter. For consistency’s sake, Bustle will use “mail-in” and “vote by mail.”

Can I Vote Early?

It depends on your state. In Illinois, for example, you can vote in person 40 days before the election. Vote.org has a handy state-by-state guide.

How Do I Find My Polling Location?

Great question, especially since some polling locations have changed due to COVID-19. Look it up online before heading out.

Can I Bring My Dog To Vote?

According to the U.S. Department of Justice, service animals can accompany voters with disabilities. For non-service pets, it will depend on your state and polling location.

Do I Need To Show ID To Vote?

Many states require an official form of identification. But in New York, for example, no form of ID is required unless you’re a first-time voter. Check your state’s requirements here.

In some states it’s illegal to share “ballot selfies,” photos in which filled-in ballots are visible. In Illinois, for example, sharing a photo of a completed ballot on social media is a class 4 felony. The rule is meant to protect voters’ privacy against vote buying and coercion.

How Do I Vote By Mail?

This depends on your state. The nonprofit organization I Am A Voter lists updated state-by-state information, with links to each state’s secretary of state. In most states, you’ll need to request a mail-in ballot. (You’ll receive an automatic mail-in ballot if you live in states with universal mail-in voting: California, Colorado, Hawaii, Nevada, New Jersey, Oregon, Utah, Vermont, Washington, or Washington D.C. In-person voting is also available in those states.)

I Requested A Mail-In Ballot. Can I Vote In Person Instead?

Likely yes! (But double check your state's rules.) Bring your mail-in ballot to the polling center. If you've already filled it out, you can drop it off there. If it's blank, give it to a poll worker, who'll exchange it for you.

My Mail-In Ballot Hasn't Arrived Yet! What Do I Do?

Is Voting By Mail Safe?

Does It Cost Money To Vote By Mail?

It depends, and also varies state by state. If your ballot doesn't include a self-addressed and stamped envelope (SASE), it should list the required postage. Fortunately, the USPS official policy is to deliver all ballots, regardless of correct postage. “In cases where a ballot enters the mailstream without the proper amount of postage, the postal service will collect postage from the appropriate Board of Elections,” a spokesperson for USPS confirmed to Bustle via email.

If I Vote By Mail, Will I Get An "I Voted" Sticker?

In many places — such as in California, Michigan, Minnesota, and North Carolina — there will be “I Voted” stickers included in the envelope for mail-in voting, but again, this is decided on a state-by-state basis.

How Early Do I Need To Vote By Mail?

The earlier, the better. The postal service recommends requesting your mail-in ballot no later than Oct. 20 and mailing your ballot back by Oct. 27, one week before Election Day. (If you pass that date, you can always drop off your mail-in ballot at your city clerk’s office, a local election office, or possibly at a designated drop-box.)

How Can I Check If My Mail-In Ballot Has Been Received?

In many places, you can track your ballot at your state’s secretary of state website.

How Can I Prepare For Downballot Races?

Downballot or downticket races, meaning those that aren’t for the presidential race, require a bit of research. They can include congressional races, as well as state and local ones. Luckily, nonpartisan websites like BallotReady.org, VOTE411.org, and Know Your Vote can help you figure out exactly what’s on the ballot.

When Will The Outcome Of The Election Be Announced?

Probably not for a couple of days or weeks, and that’s OK. Mail-in ballots are more labor intensive to count, because poll workers need to open envelopes and confirm addresses.

This article was originally published on Aug. 28, 2020