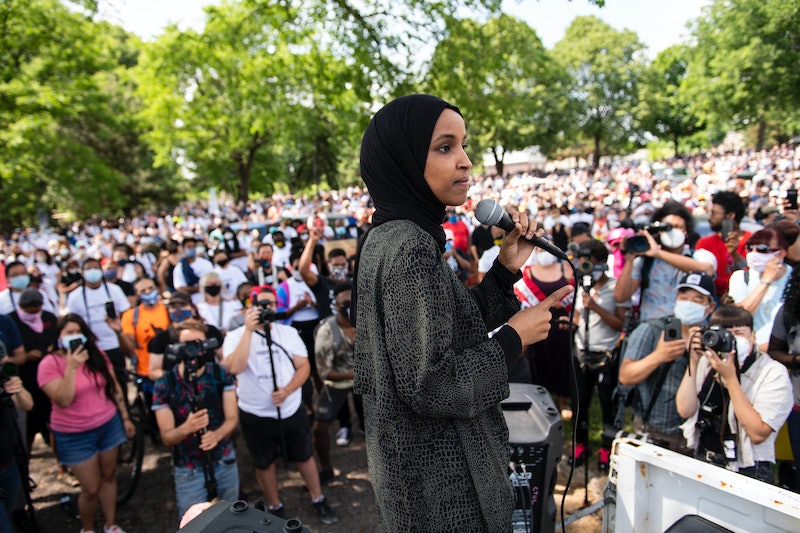 Minnesota Representative Ilhan Omar was scrolling through social media when a video of George Floyd’s killing appeared on her feed. “It was like watching a horror movie,” the freshman congresswoman tells Bustle. “You just keep yelling, and you know they can’t hear you.” The video shows former police officer Derek Chauvin, who served Omar’s Minneapolis district, with his knee on Floyd’s neck. “It was like watching a public lynching.”

In late May, Omar had planned on promoting her memoir, This Is What America Looks Like: My Journey From Refugee to Congresswoman, which chronicles her path from Somalia to a Kenyan refugee camp and ultimately to resettlement in Minnesota at age 12. Instead, she’s joined local protests to demand change in law enforcement. Her city has reignited the Black Lives Matter conversation, and activists in more than 750 American cities have joined the call to action. “For too long, Black and marginalized communities have faced violence from the Minneapolis Police Department [MPD],” Omar says. “Our chief himself has sued the department for racism before.”

In 2007, Minneapolis Police Chief Medaria Arradondo, then a lieutenant, was part of a lawsuit that alleged “race and color discrimination” against Black officers in the department. And between 2009 and 2019, “Black people accounted for more than 60 percent of the victims in Minneapolis police shootings,” The New York Times reported. (Only 19.3% of city residents are Black.) This history, Omar says, means that the MPD has far surpassed the point where reform would be possible.

Since Floyd’s death, calls for defunding or entirely disbanding the police have gained traction nationally. Omar says defunding might be an option for many U.S. cities, but not for Minneapolis. “The calls for defunding and reinvesting in [our] community would work if we had a department that wasn't having a credibility crisis.”

“You have to start from scratch,” she says. “We've had many attempts for accountability and reform, and MPD continues to fail the city. It hasn’t even performed the basic things it’s expected to do, like solve serious crimes and care for victims of homicide.”

Omar looks toward Camden, New Jersey, which successfully disbanded its police department in 2012 due to corruption. Camden had held a reputation as being one of the country’s most dangerous cities. Since 2012, its rate of violent crime has decreased by 42%.

She’s hopeful that the protests will spur real change. She’s attended several rallies — without being recognized, she says — and has spoken during Minneapolis marches. Her two teenage children have joined her. They’ve had family discussions about police violence and race for years, as Black Americans are more than twice as likely to get killed by police than their white counterparts.

“For my son, he's 14 and will often just blurt out, ‘Mom, that could be me,’” she says. “That's hard, because for him to show up as a Black man [to protests], interactions with the police can be deadly."

Regardless, her children know the power of her platform as a congresswoman. “For them, it's like, ‘Mom, you gotta do something.’”