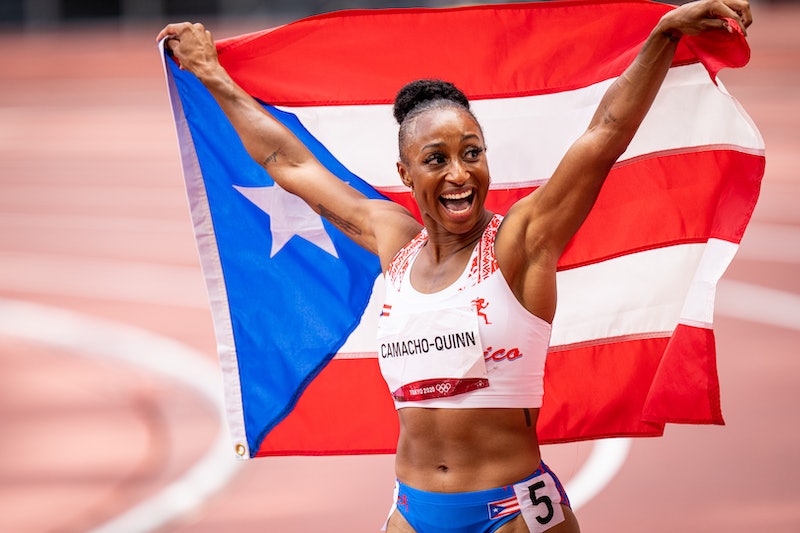 The 2021 Summer Olympics are officially over, yet this year has been nothing short of excitement — there have been many powerful displays of activism, athletes like Simone Biles took a stand for prioritizing their mental health, and of course, world records have been smashed. Of those “smashed” records, one in particular stood out above most: U.S. born athlete Jasmine Camacho-Quinn wrote history for Puerto Rico by winning its first gold medal in track and second gold medal ever in its history.

The Olympic gold medalist comes from a family of athletes: Both of her parents were on a track scholarship at Charleston Southern University — her father, James Quinn, competed in hurdles, while her mother, María Milagros Camacho, was a long jumper and sprinter. Camacho-Quinn’s brother, Robert Quinn, is currently a linebacker on the Chicago Bears.

After her historic Olympic win this year, her brother was interviewed by the Chicago Tribune, where he put his athletic career and hers in perspective: “Football is kind of America’s sport,” Quinn said. “She’s going against everyone in the world. And she beat them. That’s different.”

Camacho-Quinn had a lot to prove this year, especially because she chose to run for Puerto Rico as a United States citizen. In 2017, she addressed the world on Twitter, full of pride for her mother’s homeland: “If I truly wanted to make that U.S. team, trust me I’d be sure to make it. I don’t want to. I love running for PR & I love my supporters,” she wrote. “Again, I RUN FOR PUERTO RICO! NO I AM NOT SWITCHING TEAMS ! NO I DID NOT RUN AT USA TRIALS! I WILL CONTINUE TO RUN WITH PR ACROSS MY CHEST,” she tweeted in another post.

Camacho-Quinn dispelled dated assumptions of what it means to represent a country, and she did a hell of a job doing so. As her brother told the Chicago Tribune, “To be the best in the world? A lot of people don’t get to say that. I can say that about my baby sister.”

This isn’t the first time Camacho-Quinn was an Olympian. Back in 2016, at only 19 years old, she competed in Rio’s 100-meter hurdles semi-final, and one little mistake led to her defeat: Camacho-Quinn’s leg just clipped the top of the eighth hurdle. It was in that moment, that she knew she was not going home with a medal. In her post-race interview, crying and upset, Camacho-Quinn proudly announced, “I’m not going to let this race determine my future.”

During the same time as the 2016 Rio Olympics, the athlete was a student at the University of Kentucky. Upon her return to school, Camacho-Quinn felt disappointed: “It honestly took me the whole semester of school,” she said in a 2018 interview to Spikes World Athletics. “I didn’t want to be on campus. I didn’t want to be around nobody because I’d rather that happen at a little meet than at the Olympics, I knew I had to wait four more years.”

Well, wait four years she did, and she redeemed herself: Camacho-Quinn ran a winning 12.37 in the 100-meter hurdle finals at this year’s Tokyo Olympics where she took home gold. The winning time was slightly behind her semifinals time of 12.26, which broke the previous world record set by Sally Pearson of Australia at the London Olympics. Pearson’s time was 12.35 in 2012, and won her gold.

Why Is Jasmine Camacho-Quinn’s Win Significant?

As mentioned earlier, Camacho-Quinn was born in South Carolina and raised in the United States, but instead, she chose to run for Puerto Rico as an ode to her mother’s homeland. If you’re wondering why Puerto Rico is considered its own country during the Olympics, here is the short answer — the International Olympic Committee (IOC) has all rights and authority to determine which states qualify as a country that is eligible to compete in the Olympics. Even though Puerto Rico is a U.S. territory, the IOC declared Puerto Rico as its independent country during the Olympic games in 1948, and athletes have been able to compete, representing it, ever since.

But there’s something else that makes Camacho-Quinn’s win such a significant victory — she defied the odds, and came out in front of America world-recorder holder, Keni Harrison. So, not only did Camacho-Quinn make history on her mother’s homeland, she also won against America, competing for the U.S. Territory. As Camacho-Quinn crossed the finish line, she yelled, “Oh my gosh, did I just win the Olympic gold medal?!” Yes, you did, and you made history, Camacho-Quinn.

More like this
Bimini, Tia Kofi & More React To Cherry Valentine’s Death
By Catharina Cheung
Twitter Is Saying The Same Thing About Roger Federer’s Retirement From Tennis
By El Hunt
20 Smart Devices Under $35 That’ll Change The Entire Vibe Of Your Home
By Emma Carey
Here’s Your Daily Horoscope For September 26, 2022
By Mecca Woods
Get Even More From Bustle — Sign Up For The Newsletter