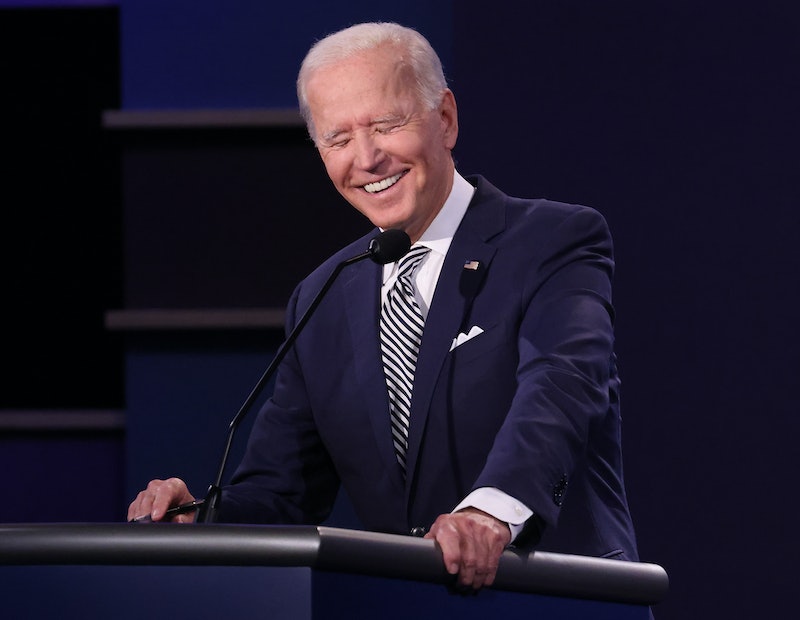 Throughout the first presidential debate on Sept. 29, former Vice President Joe Biden came prepared with a few zingers against President Trump. His campaign had set the tone the previous day, when his deputy campaign manager, Kate Bedingfield, responded to the president's suggestion that Biden take a drug test. "Vice President Biden intends to deliver his debate answers in words," she said. "If the president thinks his best case is made in urine he can have at it. We’d expect nothing less from Donald Trump, who pissed away the chance to protect the lives of 200K Americans when he didn't make a plan to stop COVID-19.”

During the debate, some of Biden's best lines followed moments of frustration after near-constant interruptions from the president. Near the beginning of the night, after being interrupted repeatedly, Biden turned to Trump. "Will you shut up, man?" (Later in the evening, Wallace also asked President Trump to stop speaking out of turn — during which time Trump interrupted Wallace.)

In 90 minutes, Biden called his opponent a fool, clown, and liar, among other things. Here are a few standout moments.

At points, Biden turned both to Wallace and viewers directly, via the camera, to express his frustration at being interrupted. "Will you just shush for a minute?" he said to Trump at one point. Later, he added, "It's hard to get any word in with this clown."

During a section focused on the pandemic, Wallace asked Trump about his campaign's in-person rallies and his ongoing reluctance to wear face masks and suggest them for others. During Biden's response, he said to Wallace, "He's been totally irresponsible ... He's a fool on this."

3. On the Trump Administration's tax code:

During the Democratic primary debates, Biden was unfailingly cordial to his competitors, but when facing President Trump, that approach changed. While talking about Trump's tax code, which favors the wealthy, Biden said to him, "You're the worst president America has ever had."

For over a month, Trump has repeated the idea that Biden would somehow "destroy the suburbs," and he returned to that idea during the debate. Biden responded, "He wouldn't know a suburb unless he took a wrong turn."

In one of his closing statements, about why voters should support him, Biden talked about how he'd stand up to Russia and President Vladimir Putin. About Trump, Biden said, "He's Putin's puppy."