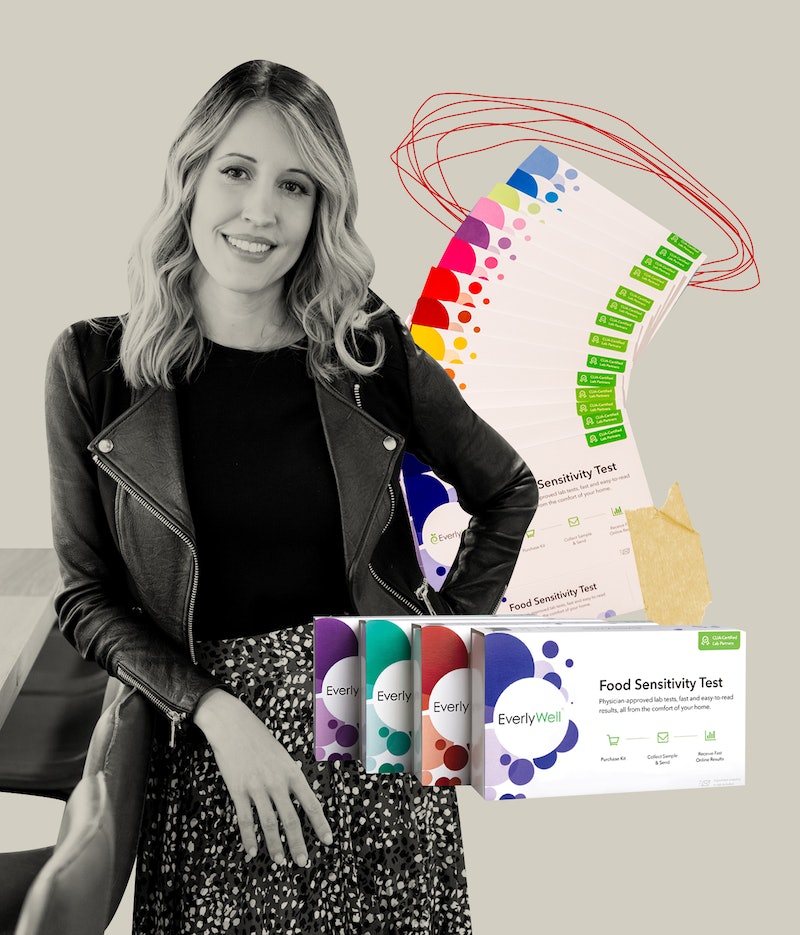 In late January 2020, Julia Cheek was flying from Boston to Chicago on a business trip to visit her company’s lab partners. Five years before, she’d founded the startup Everlywell, which produces at-home medical testing kits. On the packed commercial flight, she sat across the aisle from her company’s chief medical and scientific officer, Dr. Frank Ong, M.D., who told her about a “virus out of Wuhan” that he was tracking. He leaned on his armrest toward her. “It has the capability of becoming a global pandemic,” Cheek remembers him saying. Ong had grown up in Taiwan and lost friends and former colleagues to the 2003 SARS outbreak. “I thought, ‘That's a very specific, severe word, [pandemic], to use for a physician, who is very measured in his approach,’” she tells Bustle. She got to work.

“I do well under pressure,” says Cheek, 36, a former world champion equestrian who retired from competition in 2009. “When I was at the top of my game, one of my trainers said, ‘I've never met someone with ice in their veins as much as you.’” She laughs over our Zoom call, adding, “That doesn't mean callousness. It means that you can be resilient, and you can be focused, and you don't choke.”

In May, Everlywell became the first U.S. startup, and second company, to receive FDA approval to distribute at-home COVID tests directly to consumers. The company has now distributed roughly 1.5 million COVID test kits across the country, including for use at more than 300 companies and organizations. By the end of 2020, Everlywell hired a new president (former 23andMe exec Andy Page), hit more than $100 million in sales, and had a reported $1.3 billion valuation, in turn making it one of just 14 female-founded companies to make "unicorn status" last year, according to Crunchbase.

At the helm, Cheek joined the elusive unicorn club, having predicted, it seems, the 21st-century necessity of at-home medical testing. What does she see next?

Shark Tank's Lori Greiner checks in with Cheek roughly three years after she appeared on the show.

Cheek grew up in Dallas, Texas, in the affluent enclave Highland Park, attributed of late to the fictional House of Cards character Claire Underwood. The daughter of two lawyers, she graduated with a dual degree from Vanderbilt University in economics and psychology, followed by three years as a Deloitte consultant, and then a stint at Harvard Business School (HBS). She was part of the now-famous 2011 HBS cohort that birthed startups like Oscar Health, Stitch Fix, and Rock Health, to name a few. Although Cheek, who’d graduated in the top 5% of her class, had caught the entrepreneurial bug, she was still waiting on the perfect idea.

Six months after founding Everlywell, the Wall Street Journal published an exposé on Theranos, and some investors and journalists began making comparisons between the two companies. “We responded by being very, very clear that our offering leveraged proven [testing] methods in certified labs,” Cheek says. “The fact that we weren't creating new tests, I think, helped us to be successful.”

Ultimately, Everlywell acts as a middle man between patient and lab. Results are sent directly to customers, with the recommendation that they share the information with their health care provider. (In the case of STI tests or results that show abnormal levels, physicians from Everlywell’s network will reach out, free of charge, to discuss by phone.) Though Everlywell’s offerings are generally covered by HSA/FSA plans, the company does not accept insurance, so prices are pre-set and published on its site. Everlywell’s FIT colon cancer screening kit, for example, costs $49 versus a clinical FIT test, which averages $280 for those without insurance. The COVID-19 test costs $109.

Elizabeth Galbut was one of Everlywell’s earliest investors. The SoGal Ventures partner had been looking for a health care company like Everlywell — a “one-stop shop” platform, as she calls it — both for her portfolio and also for her own health. In 2016, she’d “gained 80 pounds out of nowhere and was having all these symptoms. I literally felt like I was going to die and doctors weren’t taking my health seriously, even though I was paying them $700 for a visit out of pocket,” she says. “I just felt so helpless.” (Her experience was so common that, since 1991, the medical community called it “Yentl Syndrome,” the phenomenon of women receiving lower-quality care than men if their symptoms aren’t similar.) She took Everlywell’s hormone test, which requires a finger prick of blood. Her results showed high levels of cortisol, pointing to a rare, hard-to-diagnose endocrine tumor. “Everlywell kind of, actually, saved my life,” Galbut says. That same value proposition appealed to Shark Tank viewers when Cheek appeared on the show in 2017: She won a $1 million line of credit from Lori Greiner, and the company’s business reportedly doubled overnight after the episode aired.

Shortly after Shark Tank, several doctors and media outlets began publicly questioning the use of IgG tests to diagnose food sensitivities — which Everlywell offers — as they’re not regulated by the FDA. (The FDA typically does not regulate at-home wellness tests.) Cheek reiterated the party line: “[The testing technology] is not the disruptive innovation here,” she told Inc in August, adding that they use the same CAP-accredited labs, such as PerkinElmer, that doctors use. “The disruptive innovation is: How do we bring it into your home? … And how do we make it affordable?”

The bulk of the Everlywell staff has been working remotely since March 13, 2020, but about 60 people work daily at the company’s Dallas lab. Cheek, who works remotely, says the location receives hourly hospital-grade cleaning, all workers are required to wear masks, and full-time caregivers and teachers are available for lab employees’ children. The company has a 3.9-star rating on Glassdoor, with the most common complaints being an intense culture and high turnover rate. “Startups are perceived as glamorous. That is one of the dangers,” Cheek says. “If I could go back to some of our earlier days [before COVID-19] where I thought we were working super hard, I didn't even know what hard was. And neither did the team.” Working from home has made her realize how much she’d been missing in her life, namely, her 1 1/2-year-old son, Crosby. "I traveled so much and was working so many late hours in the office,” she says. “I've done a better job since the pandemic started in understanding how to prioritize.”

As a thank you to her team, Cheek got the board’s approval for every employee to receive an effort-based bonus in 2020, with amounts ranging from roughly 3.5 to 4% of annualized salaries.

Despite the ongoing rollout of vaccines, COVID testing is still Everlywell’s primary focus. On Jan. 8, the company announced a partnership to bring FDA-approved COVID-19 rapid tests to workplaces and schools, with results available in roughly 15 minutes. But Cheek’s vision extends beyond the pandemic. “[We have] expanded how we think about virtual care for consumers,” she says, noting how the company recently launched a $15-per-month membership model for STI tests, whose sales nearly quadrupled in 2020. “Testing, just like prescription drugs, just like primary care, just like telehealth, should be affordable and accessible for everyone.”