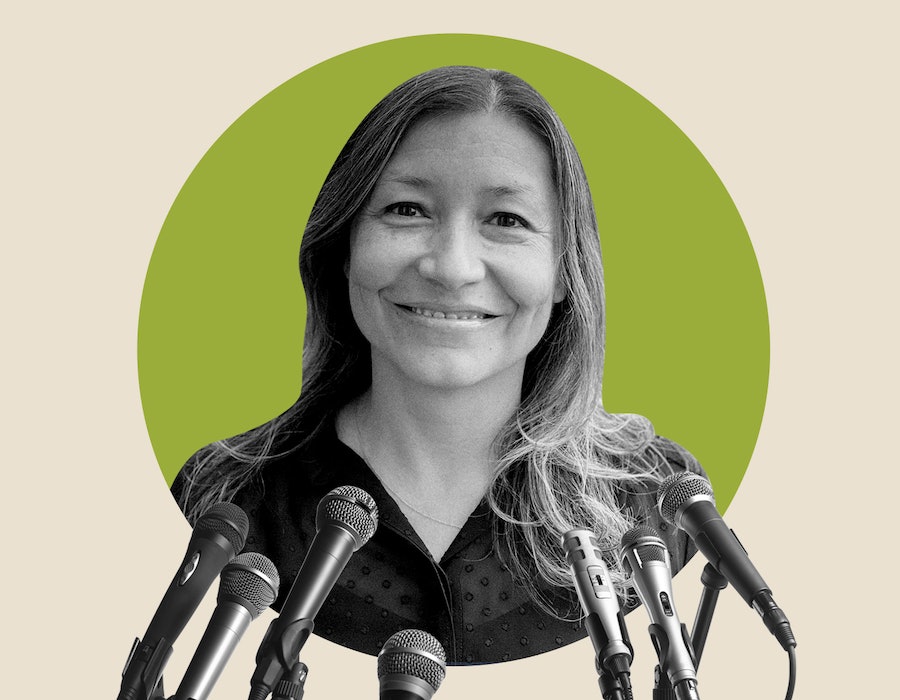 When Julie Chavez Rodriguez was nine years old, she was arrested at a supermarket protest. As the granddaughter of the late labor activists César Chávez and Helen Fabela Chávez, she grew up attending rallies, decrying pesticide use, and passing out leaflets on behalf of California farm workers. "I was exposed to organizing at such an early age, both as a skill set but also as an ethos," says the SoCal native.

Ending up as a de facto D.C. mainstay was never part of her plan. Like many activists, Rodriguez, now 42, had trouble visualizing change coming from within government. Her aha moment came in 2012, when Barack Obama signed Deferred Action for Childhood Arrivals (DACA) into law. "I called Gaby Pacheco, a Dreamer who had marched from Florida to D.C. advocating for the Dream Act in 2010, to tell her that we were going to roll this out," says Rodriguez, who was working in the White House as special assistant to the president and senior deputy director of public engagement. "Her response to me was, ‘For the first time in my life, I feel whole.’ It was that moment when I realized how transformative politics could be."

She'd come to Capitol Hill by way of the University of California at Berkeley. After college, she worked for eight years at her grandfather’s namesake organization, which supports and educates Latinx and working-family communities, before volunteering with Obama’s 2008 campaign, which led to a White House job. After his return to civilian life, Rodriguez moved back to her home state, ultimately co-directing Kamala Harris’ presidential campaign before joining Biden’s last May.

Starting next month, she’ll lead the incoming administration’s collaboration with state, local, and tribal governments. She reflects on the advice that’s guided her path.

How do you deal with people who are opposed to your work on immigration and labor?

For me, it gives me even more drive to stretch people’s vision [for our country]. Oftentimes, I go into organizing mode. I think about spheres of influence and [whose] significant voices will start to move people.

How have you pulled yourself out of low moments in your career?

One of the hardest moments working in the White House was in 2014. It was the first influx of Central American migrants that we saw, and also unaccompanied minors coming to our border. I remember some of the early images of 3- and 5-year-olds, thinking about the journey they’d had to take. It was so overwhelming. I wanted, frankly, to quit and go on the frontlines. I felt I could be more effective there. I had to remind myself that it was as important to [be connected with both] the people on the ground and in the rooms that I was in.

This year, a lot of people are feeling stuck or stifled professionally. Do you have any advice for them?

My grandfather used to say that you’re never strong enough that you don’t need help. That was really empowering for me, because it’s important to reach out for assistance and not feel like we have to break through everything on our own.

See where you do have relationships and start to build those. Be in the trenches with folks and build longstanding and deep relationships. Make sure that you’re standing up and being seen but also supported.

Stephanie Valencia is a dear friend. She’s the woman who encouraged me to apply for the position at the White House [during Obama's presidency]. She told me to be nice and respectful to everyone, especially your interns, because in places like D.C., in three years they could be your bosses.

On the flip side, what’s the worst advice you’ve gotten?

That sometimes in leadership you have to absorb pain. I think there's an element of that which is true, but sometimes there are aspects of self-sacrificing that might not be healthy or helpful. As leaders of color in particular, and as women, we’re so often put in positions where we have to absorb pain [as the] buffers, protectors, or nurses. So as a woman of color, it’s something that I have to be extra mindful of.

On that note, how do you manage the fatigue and frustration that must come with working in both advocacy and politics?

I learned it later in my career, I’ll admit. We need to take time for self-care. This work is heavy. It’s hard, especially for folks who are in the trenches. As organizers and activists, in order to be whole for the people you want to support, serve, and create space for, you need to be whole yourself. Make sure you take time [for] self-care, whatever that means to you. Don’t see it as an indulgence.

What do you do personally for self-care?

My partner introduced me to the wonderful world of Korean spas. Being able to soak and to have moments of relaxation, of reflection, of detox, it’s very reenergizing. It’s also just a lot of fun.