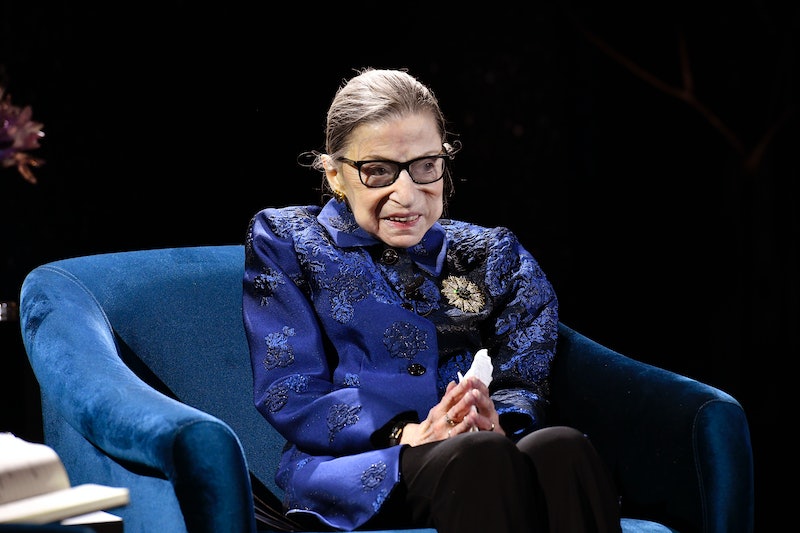 Supreme Court Justice Ruth Bader Ginsburg has died. The Supreme Court announced the news on Friday, Sept. 18, saying she had passed away earlier that day due to complications related to "metastatic pancreas cancer." She was 87-years-old.

Ginsburg was first appointed to the Supreme court in 1993 by President Bill Clinton, and emerged as a progressive voice throughout her tenure, working tirelessly even when she was diagnosed with multiple cancers. A fighter for women's rights, Ginsburg argued for equality for women under the law since the 1970s, when she worked as the director of the Women's Rights Project of the American Civil Liberties Union. She famously once said that there will only be enough women on the Supreme Court "when there are nine," and was a staunch supporter of the equal rights amendment (or ERA) to the Constitution that would ensure equal rights regardless of sex or gender.

"Our nation has lost a jurist of historic stature. We at the Supreme Court have lost a cherished colleague," said Chief Justice John G. Roberts Jr. in a statement, per The New York Times. "Today we mourn, but with confidence that future generations will remember Ruth Bader Ginsburg as we knew her — a tireless and resolute champion of justice."

It was announced in early 2020 that Ginsburg was fighting cancer yet again, and she continued to serve on the bench while she underwent treatment and chemotherapy. "I have often said I would remain a member of the Court as long as I can do the job full steam," she said in July 2020, per CNN. "I remain fully able to do that." However, this past week, she reportedly dictated a statement to her granddaughter Clara Spera in the event of her death, saying without question: "My most fervent wish is that I will not be replaced until a new president is installed."

As the country mourns the loss of the beloved Notorious R.B.G., some have already begun to speculate on what will happen next, specifically how President Trump and the Republicans in Congress will react. Installing conservative judges throughout the U.S. Justice System has been a goal of the Republican Party throughout Trump's presidency — a study conducted by the Pew Research Center found that Trump has appointed almost one fourth of all federal judges currently serving in the U.S. And that's just in the last 4 years. In comparison, President Barack Obama reportedly appointed 39% of currently active federal judges over his 8 years in office. The study also found that "Trump has appointed more federal appeals court judges to date than any recent president at the same point in their presidency." That said, should Republicans push to fill Ginsburg's seat on the bench, they would be breaking their own precedent.

In March of 2016, after the death of Justice Antonin Scalia, Senate Majority Leader Mitch McConnell refused to even entertain President Obama's nominee, Judge Merrick B. Garland, citing the upcoming election as reason enough to delay. Back then, there were still eight months until the election. Today there are less than two. Despite fighting hard against the Republican's refusal to grant Garland a hearing, Democrats are already signaling that they will abide by Ginsburg's wishes and oppose any conservative nominee. According to MSNBC, Senator Chuck Schumer said on Friday, "The American people should have a voice in the selection of their next Supreme Court Justice. Therefore, this vacancy should not be filled until we have a new president."

More like this
For These Abortion Clinic Volunteers, Going TikTok Viral Is A Risk Worth Taking
By Audra Heinrichs
Police Shove 'Full House' Star Jodie Sweetin At An Abortion Rights Protest
By Radhika Menon
Here’s How Lizzo Is Supporting Abortion Rights After The Roe v. Wade Reversal
By Brad Witter
Michelle Obama & Taylor Swift React To The Supreme Court Overturning Roe v. Wade
By K.W. Colyard
Get Even More From Bustle — Sign Up For The Newsletter