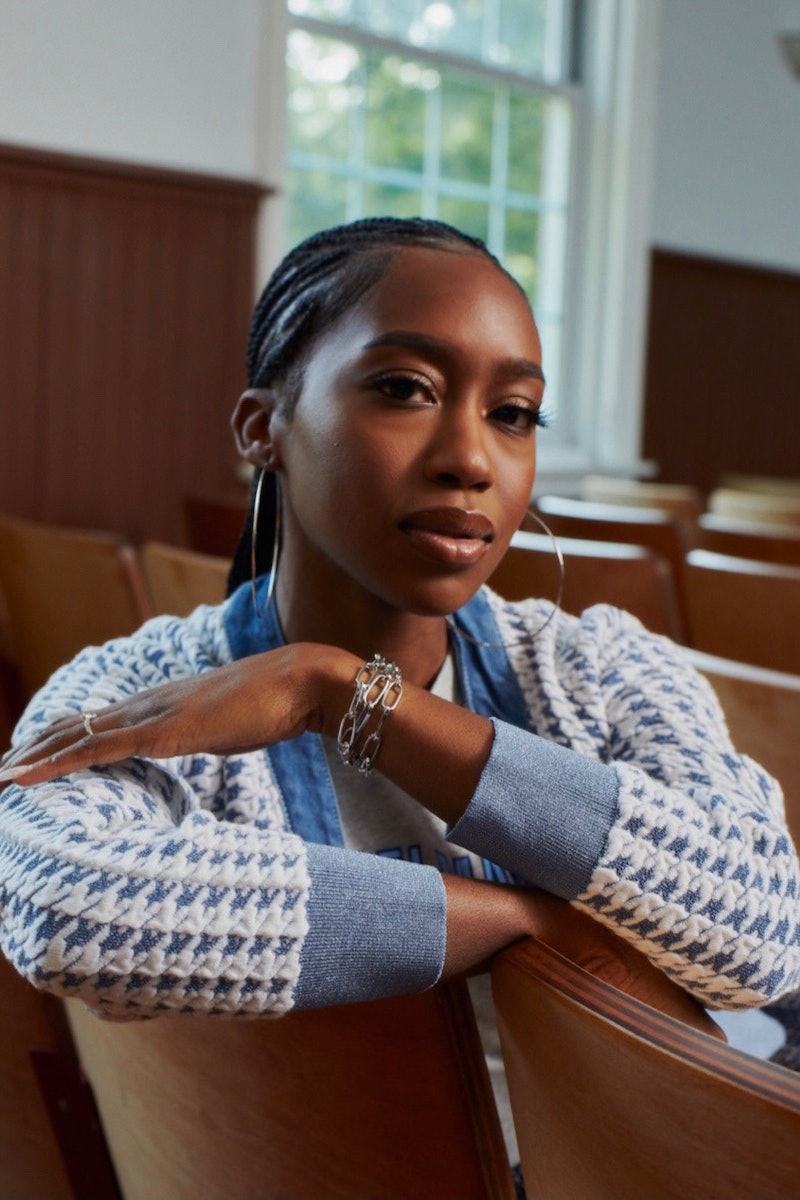 In one of her weekly Instagram videos, Lynae Vanee Bogues is sitting in an Atlanta parking lot in a portable armchair. She looks directly into the camera, wearing a cream-colored two-piece look — flared pants and a matching long-sleeve top. She accessorizes with light blue sunglasses and a paisley scarf. It’s tied perfectly. Her natural hair is blown out. Not a strand is out of place.

It’s a familiar setting for Bogues, one that fans have come to expect. Every Friday, the poet and activist posts a three- or four-minute video to Instagram, a practice she started in June 2020. Called “Parking Lot Pimpin,” the series dissects trending cultural and sociopolitical issues from the blacktop — chosen as a way to distinguish her videos from those of other creators. Bogues starts each segment with her signature catchphrase: “It’s Friday so imma keep it Black, but imma keep it brief.”

When Bogues started making “Parking Lot Pimpin” videos last year, she had just 2,000 followers on Instagram. Since then, her following has grown to almost half a million, spurred along organically by her fast, thoughtful reactions to the news cycle. It helps that she’s as consistent with her weekly posts as she is in her meticulousness in preparing for them. Along the way, she’s also landed lucrative brand partnerships with companies like Nike, Airbnb, and Tommy Hilfiger; received a DM from Lee Daniels; and was featured on the hip-hop network Revolt TV.

In one video, which has roughly 300,000 views, the 26-year-old discusses cultural appropriation. She starts by recapping Balenciaga’s latest controversy. In September, the fashion brand faced criticism of cultural appropriation for making sagging pants, a trend popularized decades ago by Black men, who were then criticized for dressing inappropriately and unprofessionally. “Men of all ages would sport their Girbauds, South Pole, Enyce, even their True Religion jeans around their kneecaps,” Bogues says in the video. She notes how the trend allowed men to show off designer boxers and big belt buckles, and how larger design brands have since copied and capitalized on its popularity in Black communities. During one pause, she asks viewers rhetorically, “But now you about to have it on the runway?”

She raises a brow and takes a sip of tea from a floral teacup.

The influencer tackles each topic she covers — from immigration reform to Aaliyah’s music — with similar precision. “When I pick an issue, it’ll take a minute to conceptualize, and then I do my research,” says Bogues, who received her masters in African American studies in 2018 from Boston University. She designates a few hours on Thursdays for research, and tailors the opening sentences to hook viewers. “I’ll look at the old books I have. I’ll search reputable sites and databases for the information I need. Once I have [that], I ask myself, ‘How do I communicate this and make it fun? How do I keep it to less than four minutes? How do I make it relatable?’”

She’s had practice to hone this skillset. Before quitting to make videos full time, the Spelman College alumna had been a high-school teacher in Atlanta for three years, and would test out ways to teach Black history. “My ability to teach was primarily nested in my ability to create relationships, and cultivate talent and drive in my young students,” she says, sitting in a quaint cafe in Los Angeles. But when COVID-19 necessitated online teaching, she started to lose her passion for it. “I was a teacher. I was a volleyball coach. I wrote, directed, and choreographed Black history plays. I was very involved with the kids, but once all that was taken away, I did not love it.” She’s managed to continue some of those relationships professionally. Today, her team consists mainly of former students who fill roles such as assistant, editor, and videographer.

In her videos, Bogues is equal measures stern and soothing, like spoken-word poetry peppered heavily with facts. She delivers each educational lecture with the swagger of the ’90s rapper Eve and the wit of Issa Rae. The camera loves her.

Bogues’ tendency to question the status quo didn’t happen by chance. “I experienced sexual assault when I was a child, and it was hard for me to adjust, so a lot of the work I’m doing now is honoring that little girl, giving her a voice, and making her feel safe because there have been a lot of times when I turned away from her,” she says.

It was the current political climate, however, that pushed her to amplify those messages outside of the classroom. When students would ask about the possibility of recreating civil rights movements like those of the ’60s, “I would say no,” Bogues remembers. “I was pessimistic, [because] people were too distracted, and there were too many things going on systemically that would prohibit people from being able to support one movement.” Her perspective changed on Juneteenth in 2020, when she joined thousands of protesters in Atlanta’s Centennial Olympic Park in a celebration that local reporters compared to an outdoor church, complete with gospel songs as the group marched toward the Georgia State Capitol. “It was the most beautiful thing. I could cry thinking about it.” Bogues says now. Not long after, she published her first video. “My platform is about inclusivity, love, honoring the different ways Blackness exists, and taking down walls of learned hate that we don't even know we exhibit,” she says.

As she meets the moment, and responds to it, she is also looking forward. “I’m just along for the ride. I’m not asking no questions,” says Bogues, who could see herself pursuing acting or multidimensional artistic projects. “Every time I get a hold on whatever’s in front of me, God’s like, ‘Alright, here’s the next thing.’ So I’m just happy to be a vessel. It’s so much bigger than me. It can’t be about me.”