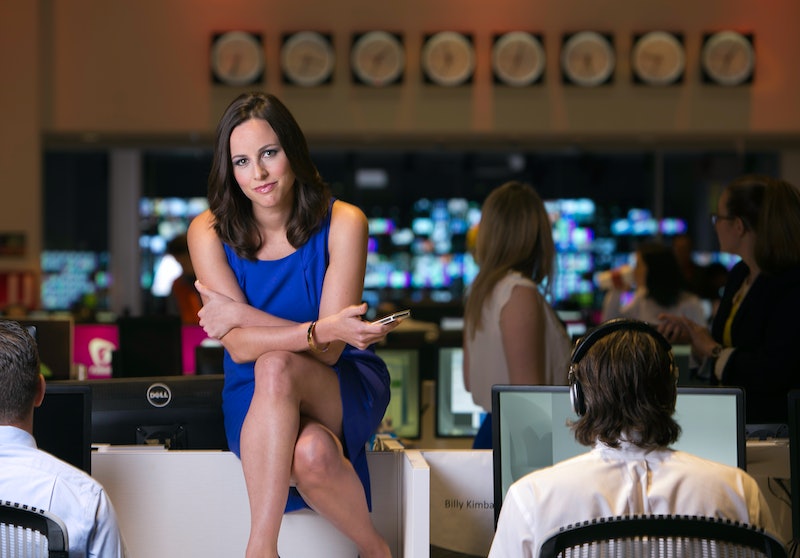 The Latina vote could determine the outcome of the November election, says journalist Alicia Menendez. The MSNBC anchor doesn’t beat around the bush. She stakes her claim, and backs it up with facts. It’s a different approach than President Trump, she says, who’s “likely to rely on misinformation when pressed." Tomorrow, Sept. 19, Menendez will launch a new two-hour show on MSNBC, American Voices, airing from 6p.m. to 8p.m. on Saturdays and Sundays. She'll focus on raising voices that aren’t typically featured on cable news. (Full disclosure: She's a former contributing editor at Bustle.)

Menendez, who helped launch HuffPost Live, isn’t alone in thinking that Latinas will bring a special edge to this year’s election. Joe Biden’s campaign has been working to inspire the Latinx electorate, especially its women. Recent events have featured virtual speeches by Latina leaders like political strategist Ana Navarro and actress America Ferrera.

In battleground states like Arizona and Florida, Latinx citizens make up 24% and 20% of eligible voters, respectively. According to the Pew Research Center, 50% of eligible Latinas reported voting in the last presidential election, compared to 45% of Latinos. (Data on these trends in nonbinary electorates was not available.) Ahead of American Voices, Menendez spoke to Bustle about the burden of responsibility as a Latina journalist, and how she’s hoping to pass the mic.

How will American Voices be different from other evening news shows?

We've had a chance to build a stable of fresh, smart, new voices — people you might not see on your TV. We’ll begin introducing them to the audience, and giving them the platform they deserve.

You’ve been vocal about the importance of the Latina vote in particular. Why is that?

If you grew up in a Latino home, you know that very often Latinas are the deciders. They decide which bills get paid. They decide which products get purchased. They run the show. We're seeing that same decisiveness and empowerment translate to this election. Latinas are engaged and emboldened to take part. They will be some of the most critical voters.

But there is still chronic underinvestment when it comes to this electorate. There is a tendency to expect people to show up without engaging them. You need to give those voters a vision, future, and agenda to show up for.

You’ll be one of few Latinas, or even women of color, hosting a nighttime cable news show. How does that feel?

To me, it’s a huge responsibility to get these stories right, and to treat them with the nuance they deserve. The protests we've seen across this country, and the movement for racial equality, are running side by side with the electoral work [happening]. When we get to November, the movement doesn't stop. The movement [will] keep building. It's important to me that we see this [change from] “How is Trump messaging this? How is Biden messaging this?” to “How does this affect people’s lives?”

There’s sometimes a tendency to see everything through the lens of November. There is a much longer arc that leaders of this movement are focused on. I try to constantly return to that framework.

What guests do you have lined up so far?

This weekend, we’ll have Beto O'Rourke, talking about Texas, and Jena Griswold, who is the Secretary of State in Colorado.

How will covering this election be different than others you’ve covered?

The challenges of this moment are crystal clear. But it's also important to shine a light on the people doing everything in their power to make sure this election goes smoothly. We [have to] start normalizing the idea that we will not have final results on election night. This election is going to look a little bit different.

Correction: A previous version of this story misidentified the Colorado secretary of state. It has been updated to Jena Griswold.

More like this
Michigan’s Governor Is “Going To Fight Like Hell” To Protect Abortion Access
By Andrea Zelinski
Dinner To Celebrate Diversity In Journalism Brings Out Media Leaders
By Brianna Kovan
LGBT+ Men Fleeing Afghanistan Were Denied Asylum By The Home Office, New Findings Show
By Sam Ramsden
Celebrities & President Biden Are Enraged By The Leaked Roe v. Wade Decision
By Alyssa Lapid
Get Even More From Bustle — Sign Up For The Newsletter