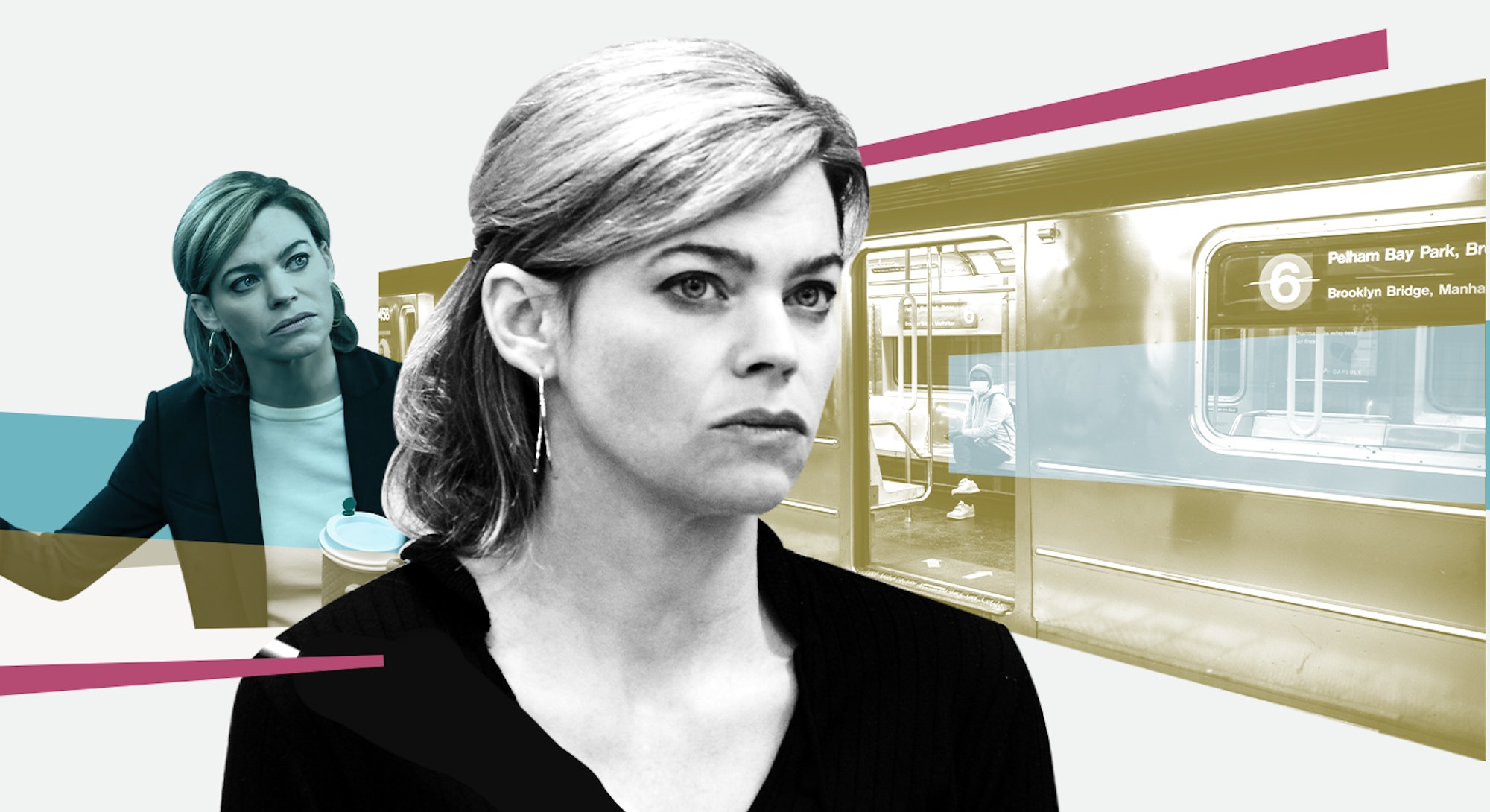 Days before Sarah Feinberg started as interim president of New York City Transit (NYCT), we made plans to ride the subway together. By her first day on March 9, there were 142 cases of COVID-19 in New York, and Mayor Bill de Blasio had urged nonessential workers to stay home. As of publishing, there has been a 92% drop in average ridership on the New York City subway, an over 70% drop in ridership on buses, and nearly 3,000 of the NYCT's 51,000 employees have tested positive for COVID-19, according to the press office of its parent agency, the Metropolitan Transportation Authority (MTA).

“[It was] clear I was landing in the middle of the crisis,” the 42-year-old tells me from her home in Manhattan’s East Village. “The job under all of my predecessors was to run a system that served 5 million people a day. The job now is to make sure that, in the best of times, the system will run safely and efficiently. But it's also a job of economic recovery, of helping this workforce recover, and of offering my condolences.” Feinberg apologizes and pauses a beat longer than normal. Despite best efforts, 84 MTA employees have already died from COVID-19. Feinberg says she’s called or left messages for the families of each worker who’s passed, and on April 14, the MTA announced that families of deceased workers will receive death benefits totaling $500,000. Her voice wavers when she speaks again. “Right now this is a job focused on moving the tens of thousands of essential workers in New York," she says, "but also doing the best I can to protect our workforce and get them through [losing] dozens of their colleagues.”

As a way to thank the MTA staff, Feinberg’s team helped launch its #HeroesMovingHeroes campaign on April 6, which features images of employees on and off the job. During her first weeks as president, she'd planned to visit workers at stations across the city, but those get-togethers were quickly axed. “It was not helpful to have another person and set of germs entering these facilities," she says. Instead, she focused on disinfecting touch points at the city’s nearly 500 stations and figuring out how to protect her workforce from the virus.

"[It was] clear I was landing in the middle of the crisis."

Feinberg’s resume puts her in a small group of leaders who, in recent years, have helped manage multiple global public health crises at the federal level. During the 2009 H1N1 pandemic, which infected 60.8 million and killed 12,469 people stateside, Feinberg was a special assistant to President Obama and senior adviser to his chief of staff, Rahm Emanuel. Less than five years later, during the Ebola outbreak, she provided strategic counsel to the secretary of the U.S. Department of Transportation.

“During Ebola, governors started saying, ‘I don't want trucks carrying hospital waste from places where there's Ebola to travel through my state,’” says Feinberg, whose other professional bona fides include communication work for the Democratic Congressional Campaign Committee, Bloomberg L.P., and Facebook. “Hospitals treat their waste in a way where disease does not survive, so there's no risk whatsoever. But there's a panic that makes people behave in ways that aren't reasonable.”

In 2015, Obama nominated her as administrator of the Federal Railroad Administration, which she ran for two years, and in early 2019, New York Governor Andrew Cuomo appointed Feinberg to the MTA board; she became NYCT's interim president a year later. (She replaced the well-liked Andy Byford, nicknamed "Train Daddy," who earned his stripes for improving train timeliness.) Feinberg says her team created several contingency plans for the coronavirus outbreak, like service reductions, assuming that staffers would get ill.

“Our job is to make sure we have options available to the governor and, now, the White House,” she says. “You want to present the boss with every tool available to best attack the problem.”

That said, the organization’s handling of the crisis hasn’t come without criticism. Employees told The New York Times that leadership was slow to distribute masks and gloves, failed to inform them about possible exposure, and took weeks to implement social distancing policies. MTA officials said they acted as quickly as possible, distributing over 5.2 million gloves and over 700,000 masks (including 300,000 N95 masks), implementing rear-door boarding on buses, and suspending cash transactions with station agents.

“We had a healthy stockpile of masks, but we felt like it was important to follow the medical expert guidance,” she says, referring to the CDC’s recommendation that only symptomatic people wear face masks, which changed in early April. “I am responsible for 51,000 people. At the end of March, we went out on a limb and said, ‘I know that the CDC guidance is that we should not be providing masks to healthy people, but we're not going to abide by it anymore.’ Who are we to tell these essential workers we're not going to provide them [masks] because the CDC seems to be weeks behind where it should be?”

Feinberg’s team was also criticized when reduced services led to pictures of overcrowded subway cars making rounds on social media. “People are upset that there isn't more service, and I don't know how many more times we can say that [it's] because literally thousands of our workers are sick,” she says. “It's a little bit like people complaining in the middle of the pandemic, ‘Why is the emergency room so overcrowded?’” She recommends going to another train car, waiting for another train, or walking to the next station. “The alternative is for me to bring back workers who are either ill or quarantined to run additional trains, which is just not something I'm willing to risk my workforce for.”

“Who are we to tell these essential workers we're not going to provide them [masks] because the CDC seems to be weeks behind where it should be?”

As for many, an acute professional crisis has collided with a challenging personal set-up. Feinberg is mother to a 2-year-old and stepmom to a 12-year-old. (Both Feinberg and her domestic partner, media executive Josh Tyrangiel, were previously married; she to Obama’s former director of communications, Dan Pfeiffer, and he to a New York architect.) “We're barely keeping it together, just like everyone else,” she says. “[Josh's] doing the majority of the child care at the moment. I might do the morning bottle and reading.” Based on the layout of their apartment, self-isolating hasn't been realistic. “I both work and have my emotional moments in our bedroom with the door closed, or sometimes in our bathroom when our bedroom is being used to play with Calico Critters.”

Feinberg had been quarantining at home since March 27 after encounters with three colleagues who tested positive for the virus. She has since returned to work, but it’s still on an interim basis. Her initial priorities for the role, pre-COVID-19, were to help recruit a permanent president and curb the increasing crime rate. “I did not believe that would be the right thing for my family,” she says of taking the job permanently, given that on a good day, it requires being on 24/7.

New roles often come with learning curves, and most executives have time to make mistakes before they face their first major challenge. Feinberg hasn’t been so lucky. Even knowing what awaited her, she would take the job again without question. “This is one of the best jobs in public service in America,” says Feinberg, whose father served in the West Virginia state legislature and whose mother was a federal magistrate judge for the state’s U.S. District Court. “I love public service, I feel strongly about it, and I believe that if the governor or the president asks you to serve, it is your obligation and your honor to do so.”