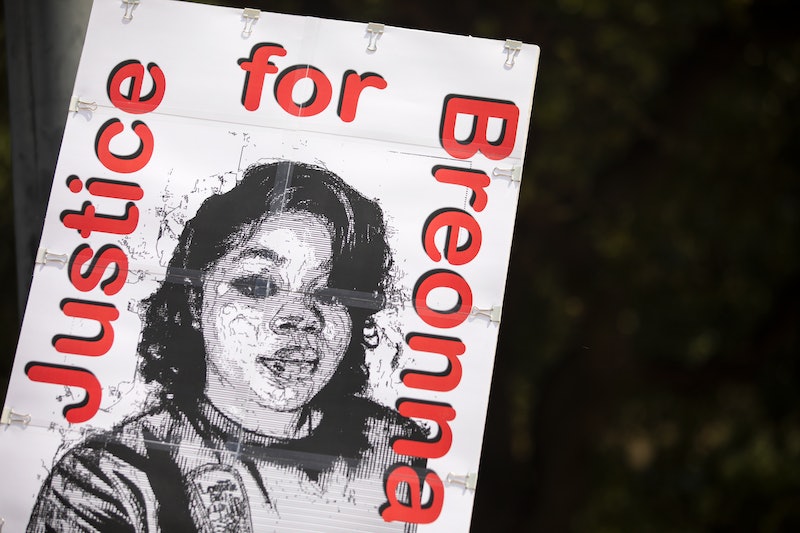 A grand jury in Jefferson County, Kentucky voted to indict only one of the three officers involved in the killing of 26-year-old Breonna Taylor. She died in her Louisville home on March 13. Brett Hankison, a former Louisville detective, has been charged with three counts of first-degree wanton endangerment. No other charges were announced.

According to Kentucky state law, “wanton endangerment” means that the person acted with “extreme indifference to the value of human life.” Each charge carries a fine and potential jail sentence of 1 to 5 years. Hankison was fired from the police department in June for firing “wantonly and blindly.”

Crowds gathered in Louisville to await the announcement. Onlookers can be heard saying “What the hell?” and “Is that it?” as the charges were announced, according to footage from local reporter Hayes Gardner. Others in Louisville have captured photos of demonstrators falling to the ground crying.

On March 13, Taylor was shot multiple times by officers who breached the door to her home with a warrant related to a narcotics investigation. No drugs were found in Taylor’s home. Vice News obtained emails sent between the involved officers, which included Sgt. Jonathan Mattingly claiming they “did the legal, moral, and ethical thing that night.”

Ahead of the decision, Louisville Mayor Greg Fischer announced a city-wide curfew. The city has been on edge, with officials blocking streets to traffic and shop owners boarding up businesses in anticipation of potential unrest. The National Guard is also expected to mobilize in the city to help local police manage crowds in Louisville, as well as in cities outside of Kentucky.

More like this
Watch Jacinda Arden’s Devastatingly Honest Resignation Speech
By Sam Ramsden
At 28, Rosie Perez Risked Her Career To Stop Playing Stereotypes
By Gabrielle Bondi
Alec Baldwin Will Be Charged With Involuntary Manslaughter In 'Rust' Shooting Death
By Alyssa Lapid
Twitter Has *A Lot* To Say About The "Single Penalty”
By Sam Ramsden
Get Even More From Bustle — Sign Up For The Newsletter
From hair trends to relationship advice, our daily newsletter has everything you need to sound like a person who’s on TikTok, even if you aren’t.