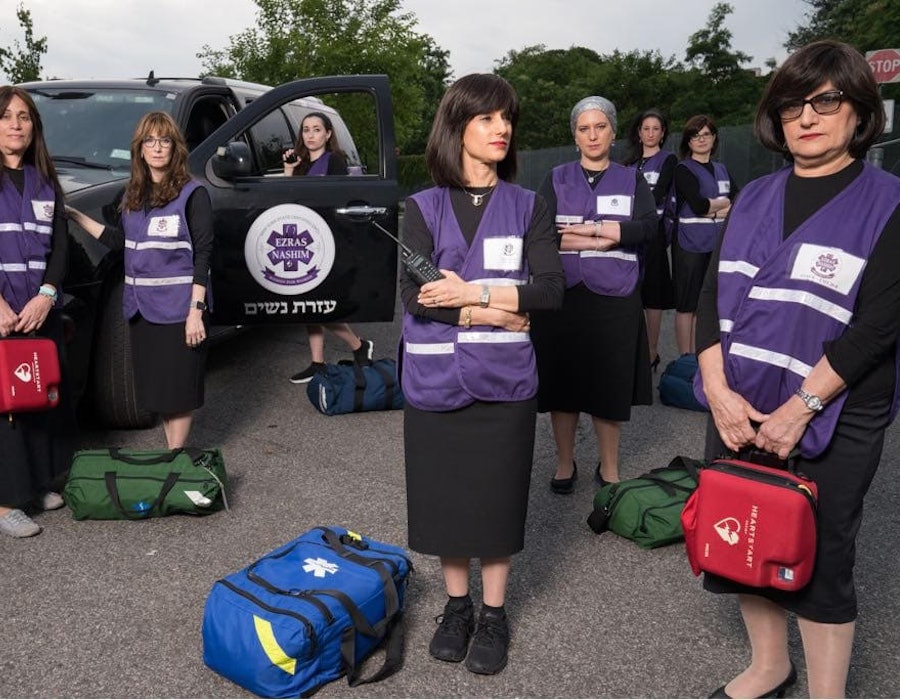 Around March 12, Tzivia Pomerantz’s 80-year-old mother developed a cough and body aches. By the next morning, her temperature had risen to 100.6 degrees. As a nurse, Pomerantz had been following the spread of the coronavirus in New York City, through the open-floor-plan offices and into their Orthodox Jewish community in Midwood, Brooklyn. She knew her mother had likely contracted it.

A COVID-19 test confirmed her suspicions a few days later. The testing-center staff insisted her mother go to the hospital — low oxygen levels, they said. Pomerantz knew the diagnosis was bad, but the hospital could soon be at capacity, without enough PPE, and overrun with the virus. Which was worse?

Pomerantz, who’s in her 30’s, instead turned to Ezras Nashim, an all-women Orthodox EMT group in Brooklyn, for which she volunteers. On Friday afternoon, just hours before Shabbat, she texted founder Rachel Freier, who then sent over an oxygen tank from the group's nearby supply. Pomerantz carefully administered oxygen to her mother from sundown Friday through the conclusion of Shabbat the following evening. “It was the piece of gold,” says Pomerantz, whose religious traditions prohibit her from using a car or money on Shabbat. “Ezras Nashim saved my mother’s life.”

Certified in 2013 and operational in 2014, Ezras Nashim helps Orthodox and Hasidic women in Brooklyn with emergency medical needs, aiming to alleviate religious concerns around modesty with male physicians and medical providers. During the coronavirus pandemic, the 50 volunteers have delivered oximeters, oxygen tanks, and masks; connected COVID-19 patients with at-home IV services; delivered a baby in an unplanned home birth; and checked in with patients who’ve been released from hospitals. “It’s been a very frightening time,” says Freier, a licensed paramedic and civil court judge in Brooklyn — and likely the first Hasidic woman elected to public office in the United States.

Until this week, Ezras Nashim could respond to house calls but couldn't transport patients. But on Aug. 13, the State Emergency Medical Services Council (SEMSCO) voted overwhelmingly in their favor, by a margin of 23-2, giving them a green light to get their own ambulance license.

“I knew we were ultimately going to win this application,” Pomerantz tells Bustle. “It wasn't a matter of if, but a matter of when.”

Before starting Ezras Nashim, the women had tried to join Hatzalah, an all-male volunteer EMT organization servicing the same community, but were denied due to concerns about gender mingling and delayed service. Hatzalah, in contrast, operates more than 60 ambulances in the New York area.

It's a battle they've been fighting for over a year. Ezras Nashim initially submitted an ambulance application last summer, but it was voted down by the city's Regional Emergency Medical Services Council (REMSCO) in November. Several of the naysaying board members are volunteers with Hatzalah, whose organization comprises the strongest opposition. They argue Ezras Nashim is unnecessary.

Hatzalah did not respond to multiple requests to comment for this story, but its attorney, Jeffrey Reisner, outlined their opinion at a hearing in July: that modesty cannot be classified as a necessity, and that an ambulance license requires an unmet need. “It is a want, not a need,” he said at the hearing. “And applications of wishes, wants, and desires cannot be found to support a proof of need.”

Freier believes the November vote was biased. “It wasn’t a panel of voters without ties to Hatzalah,” she says. “The sirens were blaring all day [this spring] and I kept thinking what a shame we don't have our own ambulances.” Adds Fraydie Liberow, a licensed EMT and longtime Ezras Nashim volunteer, "We just want to work side by side."

Ezras Nashim appealed the decision, escalating the case to SEMSCO. On May 1, a state administrative judge recommended that Ezras Nashim be granted a license, agreeing that the organization fulfilled an unmet need, but a vote was needed from SEMSCO's governing body. A public hearing followed on July 8, for which the public submitted testimony.

Yesterday's news marks the culmination of that work and advocacy. During this week alone, Pomerantz has noticed an uptick in calls, making the timing of SEMSCO's favorable vote all the more important. “The need is there, and the state board was able to see that,” Pomerantz says. “I’m overjoyed.”

More like this
Jurnee Smollett’s Heart Is Healing
By Rebecca Carroll
What Working At Marvel Is Really Like, According To A 'Ms. Marvel' Co-Creator
By Gretchen Smail
The Most Powerful Photos From The Weekend’s Abortion Rights Protests
By Melanie Mignucci
Why You're Seeing Green Bandanas At Abortion Rights Protests
By Lexi Inks
Get Even More From Bustle — Sign Up For The Newsletter