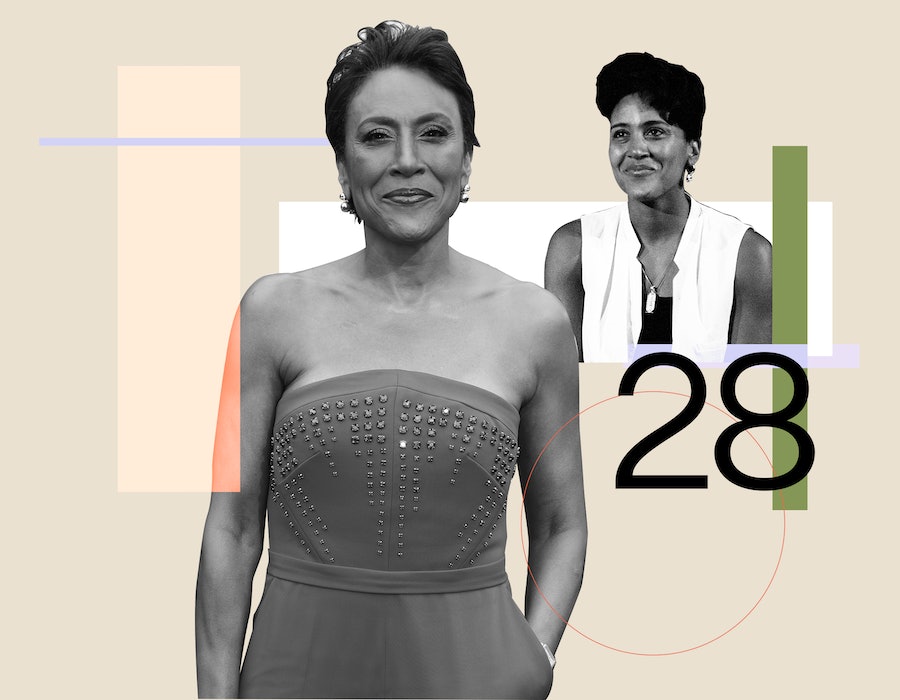 In Bustle’s Q&A series 28, successful women describe exactly what their lives looked like when they were 28 — what they wore, where they worked, what stressed them out most, and what, if anything, they would do differently. This week, cozy up to Good Morning America's Robin Roberts, the host of ABC's inaugural Thrivership Awards special on Dec. 10.

Robin Roberts has motivational speaking down to an art. So when, at the end of my interview with the Good Morning America anchor, I find myself on the receiving end of a personalized pep talk, I'm honored but not exactly surprised. “Tell me how the 20s are, Rebecca,” she says when she finds out I’m 29. “When you look at your career path, where is it that you want to go?” Something about her warmth and the sincerity in her query makes me answer honestly: I’ve actually been trying to figure that out. Roberts, who turned 60 last month, doesn’t judge.

“Trust yourself," she says. "It's really a scary time, but an exciting time in many ways. If you're uncertain, that just means there are a ton of different things you could do.”

At 28, Roberts was a sports reporter and TV anchor in Atlanta. She'd just turned down a job at ESPN, which she hoped wasn’t a huge mistake. And sure enough, just two years later, the network came calling with a better opportunity. She'd spend the next 15 years as a SportsCenter host and NFL Primetime contributor before her anointment as a GMA co-host in 2005.

“Optimism is like a muscle that gets stronger with use,” she likes to say. And she knows something about that. In 2007, she was diagnosed with breast cancer and, roughly five years later, underwent a bone marrow transplant to treat a blood disorder, myelodysplastic syndrome. And at the end of our interview, she implores me to always have positive thoughts. “It's not just what you say, but what you think — and your thoughts, even though you don't express them, can really impact you.”

Here, the veteran broadcaster looks back at year 28 and how, in the '80s, being a Black woman in sports broadcasting charted the course for her career.

[Laughs.] Gosh, I immediately start to chuckle. I was living in Atlanta. It was my fourth job out of college in television. [I'd] started at a small station in Hattiesburg, Mississippi, then Biloxi, Mississippi, then Nashville, Tennessee. In Atlanta, in addition to working in television, I got a job in radio for a popular morning show. I was up early to do that, would take a nap in my car, [and] then go to the TV station all day. I was pretty much on the go the entire time.

What about being in your 20s makes you chuckle?

I'm so much more relaxed and chill now. Everything was magnified in my 20s — the highs and the lows. It seemed like I was on this treadmill, always going, always wanting more.

How were you feeling about your career and your life?

I had mixed feelings. Oh gosh, I don't really talk about this too much. I had interviewed at ESPN, [which] was the holy grail. I have an athletic background: I played sports in college and was on an athletic scholarship. But I hadn't worked in a big market [yet, or] covered any professional teams. I realized that, as a Black woman, my margin of error was less than my white counterparts. I knew I couldn't mess up, and that I would probably get one chance. So I turned down ESPN. I felt I wasn't ready.

I had that feeling of, "Did I make a mistake? Was that my shot, and did I blow it?" That was always in the back of my mind in Atlanta.

Did you have a vision in your head of what "making it" would look like?

Growing up in Mississippi, I had a board that I wrote “success” at the top of. It had things that I wanted to do, like be in a small market for X amount of years [and then] a bigger market. I kept it for a long time. Looking back, I misspelled “success.” I only had one C in it. [Laughs.] It was a big deal to go to Nashville in '86 and then a top 10 market in Atlanta. The next job was supposed to be at a network.

At 28, were you confident you'd get to your goal?

I had my doubts. [But] even when I got frustrated and thought it wasn't happening fast enough or it might not happen, I would say, “Just getting a job in this industry is a big deal.” Even though it was $5.50 an hour, 30 hours a week as a weekend sports anchor, as a Black woman, to get on TV in the Deep South doing sports, that was something.

At that point in your life, did you feel the pressure of being one of few Black women at that level in the industry?

That was part of the reason I didn't take the job at ESPN. I didn't want to be the answer to a trivia question, you know, "What Black woman was hired in 1988 by ESPN and fired in 1989 because she didn't know her stuff?" I knew that if I failed, it would be less likely for another Black woman to be hired. They would say, "We gave it a shot, and look what happened."

My father was a Tuskegee airman, [part of] the first Black flying air corps in the military. Everywhere we went, we were the only Black family. He was the only Black officer on base. I was used to that. My dad never got on the soapbox [and] never was negative about it. I saw how it fueled him, and it did the same for me.

What did you do on Friday nights?

I was all that and a bag of chips. [Laughs.] I bought my first big car, a gold BMW. It was empowering to be in a city where you saw affluent Black people. And I lived for the weekend. I would go to concerts and was always out and about. I was single and was ready to mingle — and I mingled a lot. I'm just glad there wasn't a Page Six in Atlanta.

What do you know now that you wish you'd understood then?

Atlanta is such a blur, because I didn't slow down. I would cancel on friends all the time for assignments. I put work first, and missed out on things with my family and friends. I [wish] I could tell myself, "It's OK. You can miss this assignment. They're going to ask you again." Slow down. Be at peace. And I wish I'd known that vulnerability is a strength, not a weakness. Let people in. Let them know your emotions. Don't be so guarded.