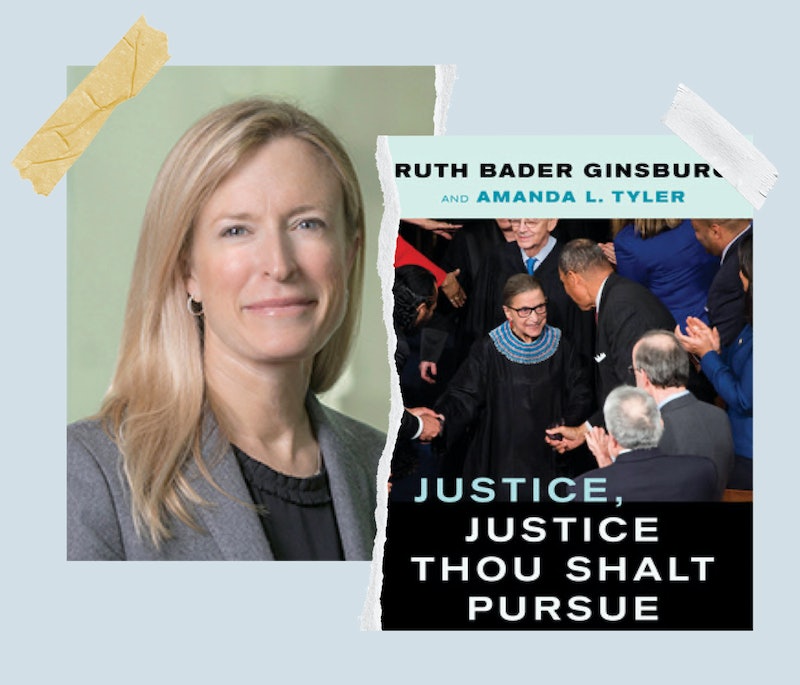 “Justice, justice thou shalt pursue,” is a quote from Deuteronomy. The words hung in Justice Ruth Bader Ginsburg’s chambers throughout her tenure on the Supreme Court, a summation of her optimism, and her interpretation of the law as a means toward the promises of equality in the Constitution. The line is also the title of her new book, published posthumously and co-authored by her former clerk Amanda L. Tyler.

Finished before her passing last September, Justice, Justice Thou Shalt Pursue: A Life’s Work Fighting For a More Perfect Union (University of California Press) includes opinions and speeches Ginsburg wrote throughout her life, from arguments as a young practicing attorney, to some of her favorite opinions penned while on the bench — many of them dissents. “I think that was a conscious choice on her part,” says Tyler, of Ginsburg’s decision to emphasize her time in the minority. “As a sort of call to arms that we still have this work to do. She left us a blueprint for how she wants people to keep moving forward.”

Tyler met Ginsburg at age 24 while interviewing for the clerk position. Now 47 and a law professor at the University of California, Berkeley, she talks to Bustle about the 1999-2000 term, the justice’s heavy-handed edits, and her prankster husband, Marty.

Tell me about the first time you met her.

I first met Justice Ginsburg in December of 1997 when I interviewed to be her law clerk. I wanted this job more than anything in the world. She was my idol. I remember being nervous out of my mind, and her being so gracious and welcoming.

She had over 100 clerks during her time on the Supreme Court. What was she like as a boss?

She was tough, with incredibly exacting standards. She was an optimist, ever hopeful for all that this country could be.

You wrote the introduction to the book. Did she make edits, or have any funny writing tips?

When I sent her materials to mark up, she went through and crossed out all the times I used the word "that.” She said, "You use the word ‘that’ too often. It's often superfluous, I don't use it nearly as much, [and] you should adopt my practice." It was important to her that you never use four words when three will do. Every single word in a draft had to be doing something.

And when I sent her the initial draft of the introduction, she wrote back, "There's not enough in here about Marty!" This was weeks before she passed, and Marty was ever-present in her heart.

The book paints a beautiful picture of their relationship. I love the story from your law clerk reunion about Marty secretly sticking a sign on her back that read “Her Highness.”

Theirs was this grand love affair. I was invited to give a toast in her honor in 2013, and that [story] is taken right out of that toast. She laughed so hard when she heard it, she practically fell out of her seat. I had never seen her like that.

You describe that law clerk group as an extended family. Do y’all have any plans to celebrate her life?

We’ve talked about getting back together when it's safer [to] hang her portrait. It’s tradition, [and] every justice has one painted. Hers is a beautiful portrait that she was very involved in. What’s really struck me [about her passing] is how many people felt a deep connection to Justice Ginsburg, and how powerfully everyone mourns her loss. It means that she's a part of the American fabric. She's always going to be with us.

Based on your more recent conversations with her, what fights would she have wanted us to continue?

There's a tremendous amount of work to do on the subject of race relations and voting rights. It's one of the reasons we included the Shelby County [v. Holder] dissent [in the book]. It’s also why she embraced the moniker “the Notorious RBG,” because it arose out of that dissent. She believed the court had erred egregiously. By designating those dissents in the book, I think she was trying to keep us talking about work that needs to be done.

And voting rights are under attack right now. I know she compared choosing her favorite opinion to choosing a favorite child or grandchild, but I have to ask, do you have a favorite speech or opinion from the book?

For me, it's [United States v. Virginia] and Shelby County. The gloves came off. She was respectful, because she was always respectful, but she [essentially] says, “The majority is walking us backward.” I get goosebumps.

Looking back on your time with her, what stands out about working on this book?

I feel so fortunate that I was able to work with her on this project in the final months of her life. What a gift, to be able to talk with her about her legacy.