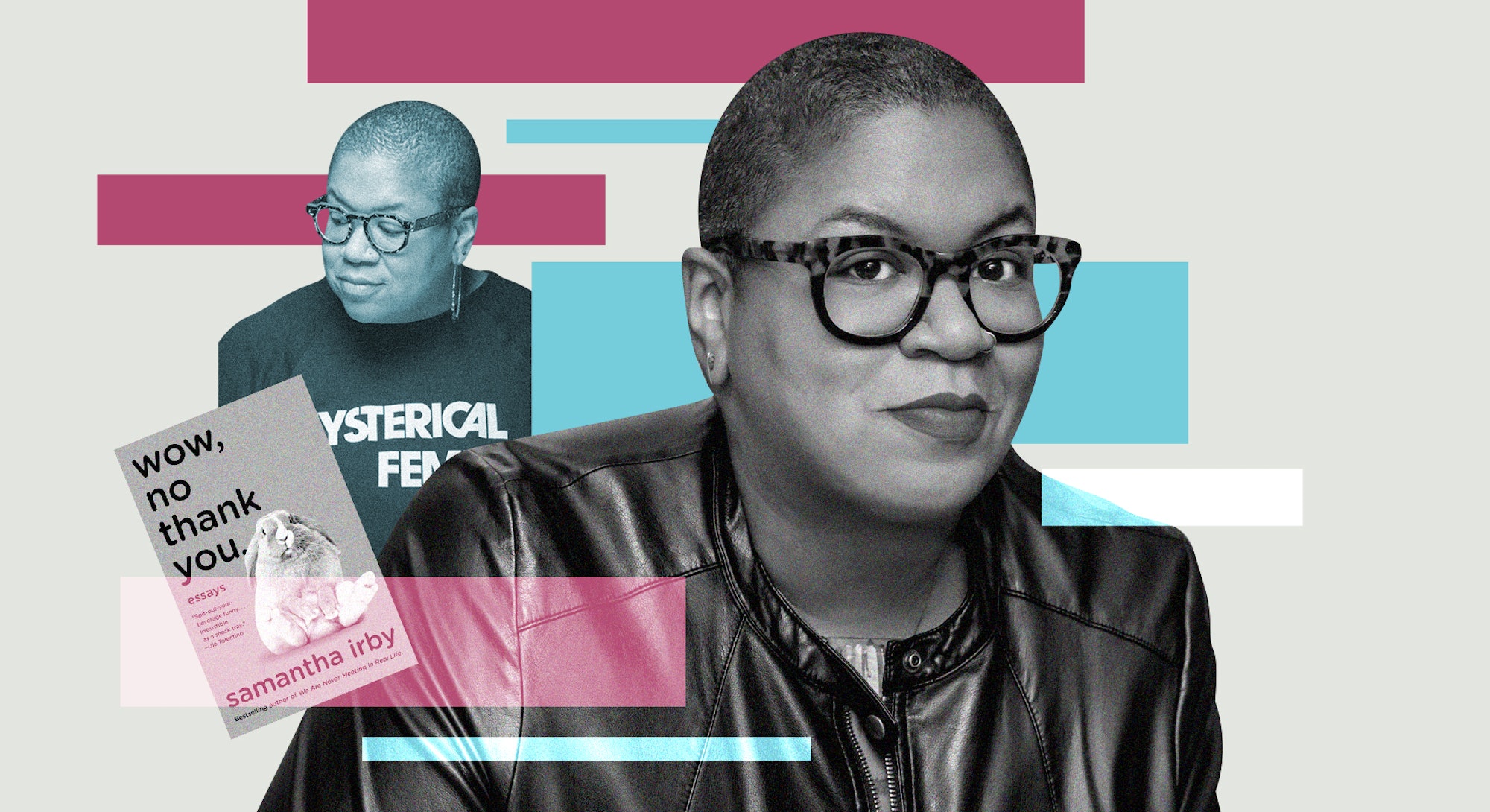 At first blush, by trajectory and style, Samantha Irby may seem like a remnant of the personal essay boom. She’s unabashedly frank, sometimes unsavory, and often revelatory. In her new essay “Hysterical!,” the 40-year-old writer details her relationship to menstruation and her subsequent hysterectomy, writing, “Here is a list of things I would rather do than carry a human to term in my battered uterus... take a soupy diarrhea shit in the middle of the floor in a public place, then eat it.” Critic Parul Sehgal described Irby’s place in the literary canon for The New York Times, writing, “She understands suffering and uncertainty, and is wildly, seditiously funny on both. Read Irby because she knows what it means to live with a fair amount of panic and largely indoors. ... She might be our great bard of quarantine.”

I spoke to Irby on a Friday evening about three weeks ago, after she got home from working in the writer’s room of Showtime’s Work in Progress, a wry, Chicago-based comedy about Abby, a 40-something self-identified “fat, queer dyke” living with depression and obsessive-compulsive disorder. (Season 1 premiered in December.) “I feel molded by this place,” she says of Chicago. Her hometown, Evanston, is a northern suburb. “I have so much love for here.” After establishing herself in Chicago’s comedy scene, she moved to Kalamazoo, Michigan, with her wife and stepkids. She misses the city.

Irby is candid about her upbringing and being the caretaker for her mother, who had multiple sclerosis. “I grew up in several apartments — let's keep that real — where we never had a phone,” she says. “We moved to one place because it was down the street from the fire department. My mom was very ill, so [I could] walk to the fire department if something happened, which I definitely had to do.” She attempted suicide at 13. Her parents died within six months of each other when Irby was a teenager. She had to drop out of college and, at one point, live out of her car.

In light of this, Irby insistently seeks joy in her writing, even when the topics themselves veer heavy. “It's like, why should a person who grew up that way put any more pressure on themselves, other than to have food and housing?” she says. “The rest is just gravy.”

Irby is a generous conversationalist, her laugh brimming with energy and freckled with occasional giggles. Like our conversation, her essays have a deceptive, conversational ease. But writing is still work, no matter how smooth the finished project. “There was a time I could write on my lunch break or during the day, but now that I live with people, they have to be asleep before I can really get work done,” she says. “So when I’m on deadline, I wait for everyone to go to bed, and end up working from 9 or 10 p.m. until 3 a.m.” Our conversation shifts from her influences (Fiona Apple, comedian Robin Harris), to her tonal inspiration (comedians Mo'Nique, Paul Mooney, and a dash of David Sedaris), to her love of Star Trek: The Next Generation. She traces her internet lineage back to an early blog, before her more well-known Bitches Gotta Eat.

“When I started writing in earnest, I started my blog to convince this dude to date me,” she says. “It worked. I wish I could say I had some noble reason for continuing, but really it’s just this yawning pit of need, and the need for people’s approval.”

She writes about living with Crohn’s disease (“So here is the thing about carting around a bowel disease when you actually have to leave your home and do things out in the world: You’re always thinking, ‘What if I have to poop?’”), mistakenly asking a waiter if he’s familiar with her work (“Am I ever going to stop writing the horror movie I have been starring in since the day I was born?”), and reveling in bodily confidence, as demonstrated in her critically acclaimed episode of Hulu’s Shrill. She's keenly aware of both the foibles and graces of the human body, without ever losing her particularly vulgar brand of humor.

But what role does humor, and essay writing writ large, serve during a pandemic? How should writers continue on? How do we make sense of the world we live in? Irby's third collection, Wow, No Thank You, debuted at the top of The New York Times bestseller list in March, and while confessional and at times shocking, it's also positioned toward connection. She drives toward relatability, suggesting it as a balm for periods of instability. The first essay of her new book cheekily critiques the celebrity profile by poking fun at the genre’s unattainability. “I grew up on welfare,” she says. “We lived in section 8 housing. I’ve had to spend 20 years getting for myself the things I wasn’t provided. Just once I want to see one [profile] that doesn’t feel like something the reader couldn’t do. I want people to read my books and be like, ‘I could do exactly what that b*tch did.’”

She’s equally frank about what keeps her professionally afloat. “I still can only be a writer because I partnered up with someone who will work the steady job,” she says. “I sold a book and paid off all my wife’s debt. The trade is that I can still dick around and she does the clock punching.”

Memory and truth in confessional writing are complicated beasts, and confessional prose is a difficult tightrope to walk. “The way we remember things depend[s] on what we want to get out of the situation or how we’d like to retell it in the future,” she says. “But the boundaries are easy to draw when they involve other people. I never want to have a conversation, especially after something is already in print, where someone says, ‘You shared something I would never have wanted you to share.’”

In her stories and, often, in her jokes, Irby makes herself the villain — or at least the punching bag. "I'm a depressed person who sees things from a negative prism, so I usually don't demonize anyone other than myself in my stories," she says. Irby was never shamed for being depressed growing up, although she didn’t have access to treatment. She’s aware of how limited and limiting conversations about mental health have been in the black community. So when she dedicates the book to the antidepressant Wellbutrin, she’s again balancing her pull toward humor with a gimlet-eyed nod to how she, and many others, make it through the day.

“My approach to things is just talking — about the Crohn’s or anything else,” she says. “There’s a freedom in talking about it. I feel deep shame all the time, just living on this planet. The more I talk about it, the less shameful it feels.” Does Irby feel shame over anything she’s written? Is that the marker of moving beyond the tell-all essay, the ability to break away from our natural tendencies?

“I haven’t regretted anything,” she says.