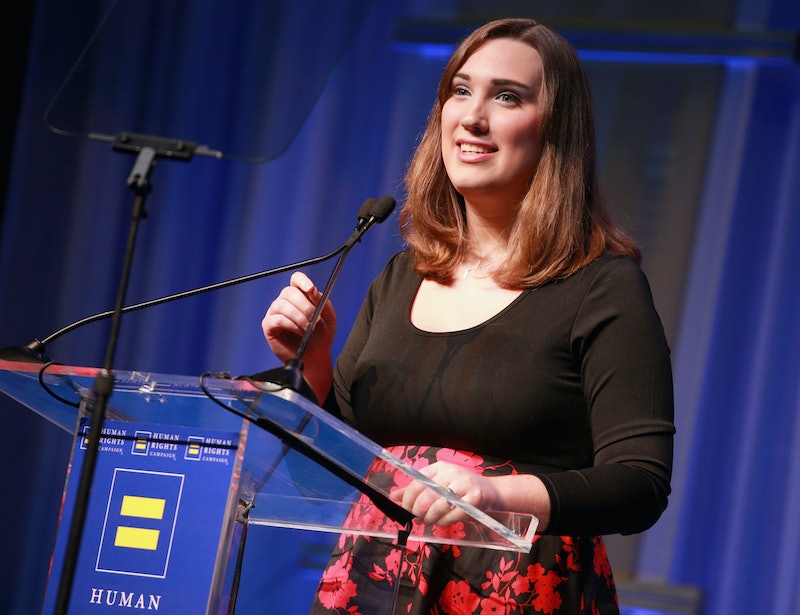 In Delaware, Sarah McBride has made history as the first openly trans person to be elected to a state senate. With her victory, she will ascend to the highest office ever held by an openly trans person in U.S. politics. McBride, 30, beat Republican Steve Washington to represent Delaware's 1st state district, winning an emphatic majority against a candidate who's campaign included anti-trans rhetoric. Both District 1 and the state as a whole lean Democratic, and McBride will join a Democratic state senate.

This isn't the first time McBride has made headlines and history. In 2016, she became the first openly transgender person to speak at a major party's convention when she addressed the Democratic National Convention in Philadelphia. Her interest in politics began when she was young, according to a January interview with The Lily, with McBride recalling that she memorized Barack Obama's entire 2004 convention speech as a teenager.

Her career began in earnest when she interned in the Obama White House, and she later worked with former Delaware Governor Jack Markell and former Attorney General Beau Biden to help pass Delaware's Gender Identity Non-Discrimination Act. "Her tireless advocacy for passage of this legislation has made a real difference for all transgender people in Delaware," Markell said of McBride when the law passed in 2013. McBride had joined the Board of Directors of Equality Delaware when still in her twenties, and was instrumental in getting the bill onto Markell's desk.

McBride also continues to work with the LGBTQ+ advocacy organization Human Rights Campaign, serving as a national press secretary and spokesperson. She is one of 21 openly trans candidates who ran for office this year, and among the more than 1,000 LGBTQ+ candidates who stood in 2020 — the highest number in U.S. history.

More like this
Savannah Guthrie Got Her First-Ever Tattoo With This Former Wild Child
By Suzanne Zuckerman
Jessica Simpson On The Time She Was Pursued By A Backstreet Boy & An *NSYNC Member
By The Editors
At 28, Rosie Perez Risked Her Career To Stop Playing Stereotypes
By Gabrielle Bondi
Kim Petras Just Made Grammy History
By Jake Viswanath
Get Even More From Bustle — Sign Up For The Newsletter
From hair trends to relationship advice, our daily newsletter has everything you need to sound like a person who’s on TikTok, even if you aren’t.