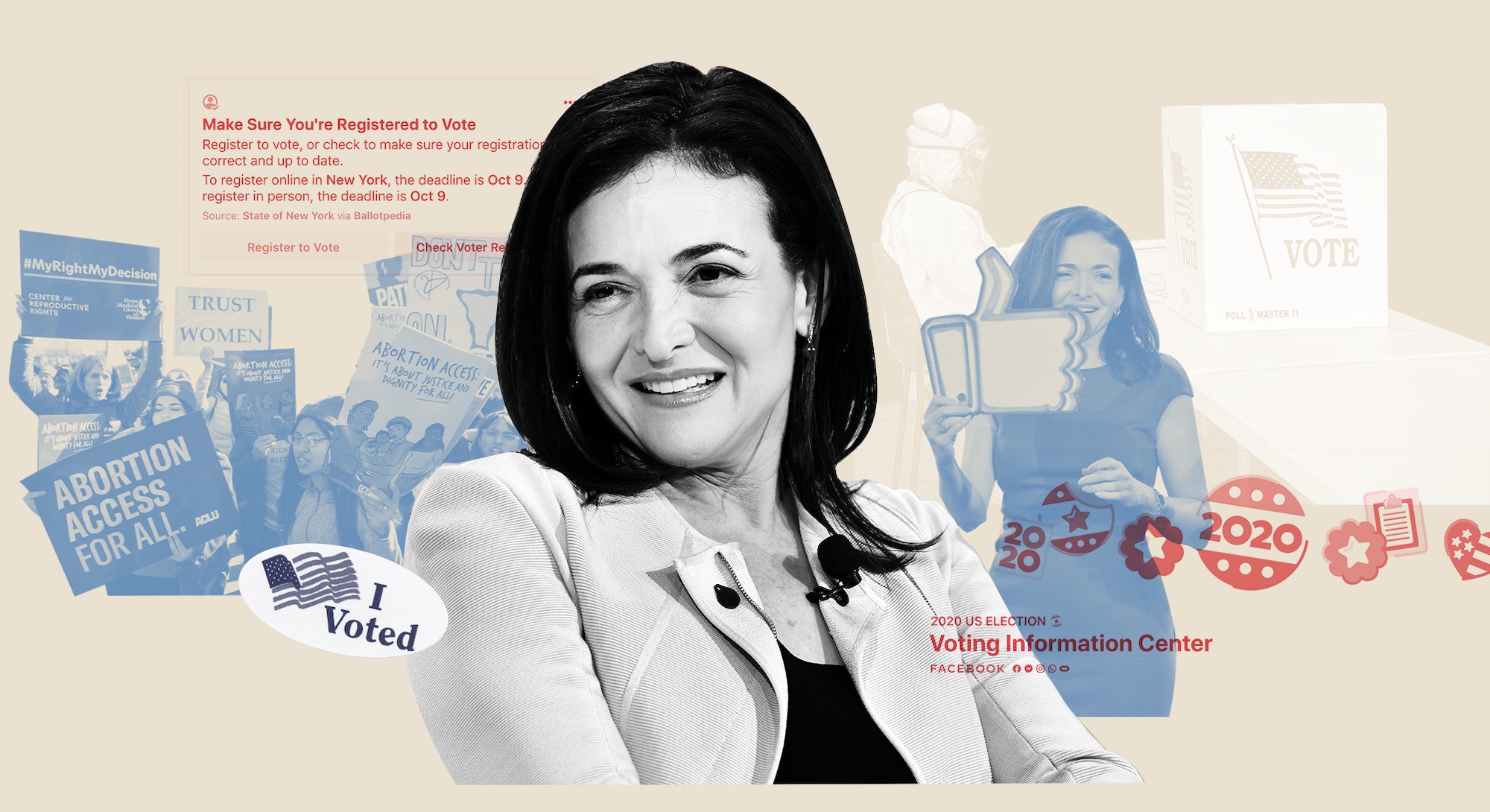 Sheryl Sandberg doesn’t want to run for office, but she wants you to. “I really love my job and I feel so strongly about the work we do at Facebook,” she tells Bustle, laughing off the suggestion of her own candidacy. Perhaps it’s not that surprising — would Washington even be an upgrade for Facebook’s billionaire chief operating officer? — but she’s adamant about one thing: We need more young women voting and running, especially after 2016. “For me as a woman, for Hillary Clinton to get so close...” she trails off, remembering her then-9-year-old daughter’s reaction. “It was very, very, very emotional.”

The stakes are as high as they get for Facebook in 2020, and while it’s her boss’s cozy relationship with Trump that’s currently in the spotlight, it’s clear from our conversation that it’s 2016 that’s still on Sandberg’s mind.

The company’s new voting initiatives, which rolled out this week, are one way she is making peace with that history. If you’ve been on Instagram or Facebook lately, you’ve likely seen the tools in action, with prominent links inviting users to register to vote or to view the company’s Voting Information Centers, which give users the who, what, and where, if not the why. Below, Sandberg talks us through what counts as success in 2020, her No. 1 issue at the ballot box, and how she replied to that message from Selena Gomez.

Tell me about how the company’s voting initiatives came about.

This is such a critical election, and we all know there's so much at stake. Then with coronavirus — think about how many people are genuinely confused. A lot of people are going to try to vote by mail who have not before. A lot of people have to register to vote. A lot of people don't know if it's safe to go to the polls, what the deadlines are, what the dates are. And so, I think, more than ever before, providing really comprehensive voting information is important.

What would you say to young women who are considering not voting?

Issues for women have never been more important. The only way to participate in the electoral process is to participate in the electoral process. You only get to vote for a president every four years. Also, if you're thinking of not registering to vote, I'd remind you that we just celebrated the hundredth anniversary of the 19th Amendment. It took 140 years from the time the first white man got the vote to when women did, and obviously people of color also fought for that right to vote for so long. Ruth Bader Ginsburg has an amazing quote: "Real change, enduring change, happens one step at a time."

I have never, and could never, vote for a candidate who wasn't strongly pro-choice.

Walk us through your election night in 2016.

My daughter, who's 13 today, was 9 [at the time]. The votes came in way after her bedtime, so when she went to bed, I said, "I'm going to wake you up to see the first woman accept that she won." We woke up in the morning and my kids were like, "You didn't wake us up." For me as a woman, for Hillary Clinton to get so close… it was very emotional and something I care about deeply.

But all of these elections are important. It matters who's on your school board. It matters who is your state legislator. What we see is that every step of the way, the higher the office goes, the fewer women are in it. So one of the messages I have for the women who are reading this is not just vote but consider running. Consider getting active in the political process.

Is that something you would ever consider? Would you ever run?

No. [laughs] I really love my job, and I feel so strongly about the work we do at Facebook. I think we have a lot of work to do to show people the good that the platform does, to show people that we are going to do everything we can to protect this election.

How will you measure the success of your efforts in 2020?

When you look back at 2016, we were not prepared. We were prepared for people trying to hurt the election, and that normally meant state interference, so stealing stuff — hacking, fake emails. We have a good track record on that, but we absolutely missed [in 2016]. The FBI missed, the CIA missed, everyone missed. So, do we think people are trying to interfere in our election? Absolutely. We've built up systems to help prevent that. In 2016, we took down no networks. In 2017, we took down one. In 2018, we actually had a very good track record of finding everything and taking it down, and in the last year, we've taken down over 50.

Selena doesn't want hate on our platform, and we completely agree with that.

What's your No. 1 voting issue?

My No. 1 voting issue is definitely pro-choice. I have never, and could never, vote for a candidate who wasn't strongly pro-choice.

Over the past six months, workplaces across the country have been grappling with ways to improve company culture. How do you address those concerns at Facebook?

We have very active employees. It's definitely not always easy and it definitely can be hard to navigate, but we really like that we are a company filled with strong-willed people who really, really care. I think we can channel that. I think that's why people come to work.

Selena Gomez posted recently on Instagram about hate on your platforms, directly calling you and Mark Zuckerberg out. Did you respond to her?

Yes, I did reach out to her. Normally when you have a protest, it's a situation where someone's protesting something and you're against what they believe. That's not this case at all. Selena doesn't want hate on our platform, and we completely agree with that.

It's a difficult thing to do, and we're very public about our results. We put out a report every quarter. When we put the first one out in 2018, it said, "Here's how much hate we found on our platform, and here's the percentage of it we took down on our own." That percentage was 24%, which meant that 76% of the time when we took down hate, someone had to point it out to us. Our latest report, which we put out this summer, showed that we were getting 95% of it down on our end. But 5% on Facebook is still a lot.

Does it bother you that, say, Selena Gomez isn’t necessarily taking that nuanced view?

It's on us to educate the people that use our platform, whether they're Selena Gomez and a huge celebrity or not. It's up to us for us to make sure we can explain what we're doing.