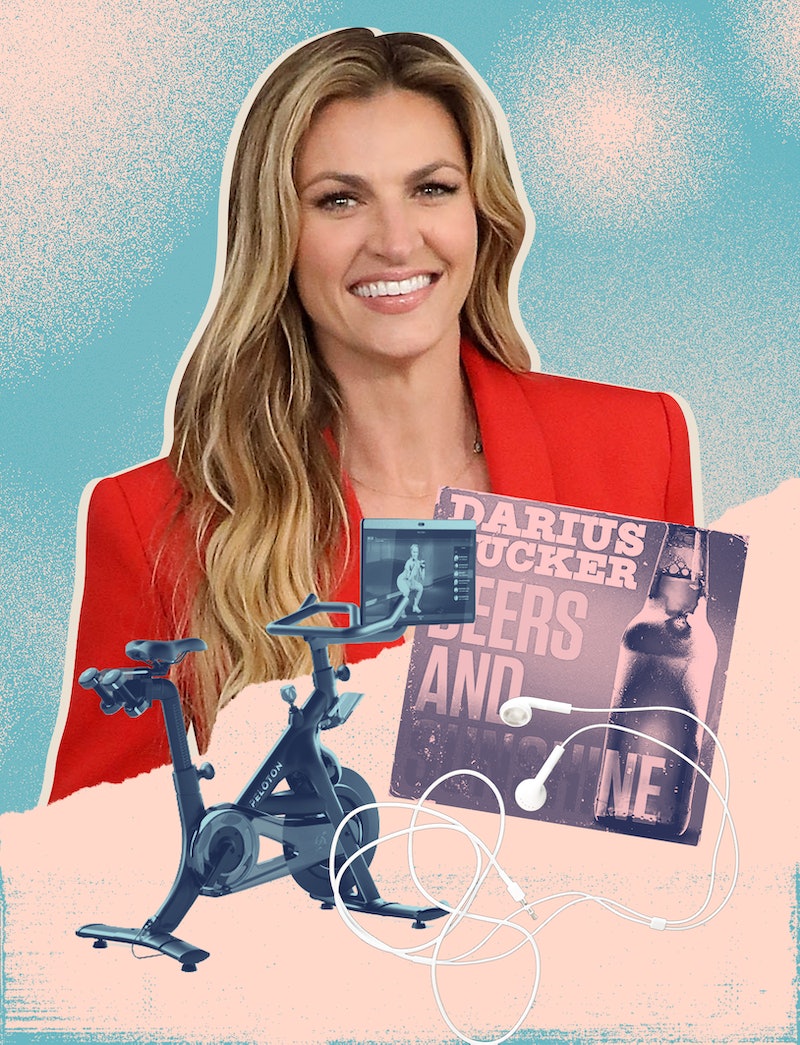 In “Pep Talk,” Bustle chats with celebrities about finding levity in a year of loss. First up is Fox sportscaster Erin Andrews, who’s reported courtside for more than 20 years.

Erin Andrews is a tattletale. It’s a recent development, she says, but a title she’s comfortable bearing. The NFL sportscaster spent the fall crisscrossing the country for Fox Sports, holed up on hours-long commercial flights during the pandemic. If you’ve flown in the past year, you’ll likely remember the prevalence of Starbucks and Dunkin’ takeaway cups — and subsequent in-flight sipping. Andrews would call flight attendants to rat maskless people out. “It was super scary,” she tells Bustle of the trips. “I was stressed out about not wanting to get sick, not wanting to miss work, not wanting to come home and get my husband sick.”

In her new iHeartRadio podcast, Calm Down with Erin and Chariss‪a‬, the Los Angeles resident shares stories like these, aiming to pull back the sports-industry curtain with co-host and fellow sportscaster Charissa Thompson. What’s life really like on the road? Ever been thrown out of a stadium? (Thompson has.)

It’s her latest project, which she juggles alongside a Fox job and a two-year-old sportswear line, Wear by Erin Andrews. (The brand, which injects loungewear-chic into an otherwise shapeless market, is planning to expand to additional collegiate teams and sports soon. “We want all the leagues,” says Andrews, 42.) And as her airplane story suggests, 2020 changed us — for safety or psychological reasons. The Tampa native talks to Bustle about the past year and the relationships, Peloton instructors, and songs that have made it better.

“This wasn’t a year about having fun. This was a year of doing your job, to be a distraction for the country.”

Has the pandemic changed your job at all?

The only thing that really changed was how stressful it was to travel [last fall]. You’re on a plane for a minimum of four hours. I’d stay in a hotel four times a week. That added a lot of anxiety, not to mention worry about my loved ones. My mom and dad are in Florida. They’re high-risk.

How are they doing?

Thankfully, they just got their second vaccine. Full disclosure, my dad had a heart attack right before the pandemic. I was trying to get him stable, out of the hospital, and then our country shut down. My anxiety was through the roof.

We had a game [in Florida] early in the season, and I saw them in the driveway. We did a socially distant meeting. I’ll get emotional now, because I haven’t seen my parents in over a year. Saying goodbye to them was awful. I called a car service to pick me up, and I was bawling in the car.

Did that stress seep into your job?

I remember one night, we were sitting in a meeting room together. We were all 6 feet apart, and I remember someone saying, “Are any of you having fun?” But this wasn’t a year about having fun. This was a year of doing your job, to be a distraction for the country.

What’s something that’s alleviated that stress?

I made a point to FaceTime more with friends and keep in touch more. And my relationship with my husband [former NHL player Jarret Stoll]. During the NFL season, I’m away from him from September to February, and then he’s away till June. We had time to just be together, to learn to live and be a married couple. We don’t get that opportunity a lot.

How have some of those relationships changed over the past year?

I was just talking to my girlfriend about this. We were on the phone all night talking about the Prince Harry and Meghan Markle interview. I’m a sh*tty friend during football season. I’m always in between flights or in coaches meetings. I can’t balance it. I’m grateful that they’re tolerant of my schedule.

My husband and I missed the whole social circle where people commiserate about their kids, homeschool, all that stuff. We’re going to have kids in the next couple of years, so maybe we’ll be in a different social scene. But it’s been great for me to rekindle with my girlfriends, because, look, you still want to complain about your marriage or what you’re cooking. Last night I did a new chicken wing recipe and needed help to not have the fire alarm go off.

On your latest podcast episode, you talked about watching the Golden Globes. Did you have any favorite shows that made 2020 a bit better?

And any other podcast recommendations?

I’m into How I Built This, and I’m obsessed with SmartLess, with Jason Bateman, Sean [Hayes], and Will [Arnett]. It’s fantastic. I was just listening to the [episode] on George Clooney, which was phenomenal. They’re so freaking funny and really complement one another.

When you listen to other podcasts, do you pick up tips for your own?

Yes. Two years ago, I started listening to Oprah’s Super Soul. She’s always so prepared, and one of the biggest things I learned — and Kevin Hart said this to us — is that you need to listen. Charissa and I are doing an interview today, and Charissa called me, and she’s like, “Should we write out a list of questions?” And I’m like, “You know what? We both know the subject. Let’s just go with it and see where it takes us.”

In the SmartLess podcast, they’re very calm. Charissa and I are like, “Keep up!” I think that we can learn a lot from them, and not be so, “I had four cups of coffee! Here I am!”

Do you have any dream subjects you’d want to interview?

Anyone from Schitt’s Creek would be amazing. I’m obsessed with them. Or Faith Hill.

Speaking of music, are there any songs this past year that made your days better?

“Beers and Sunshine,” Darius Rucker. Over the weekend, my sister and I were listening to the Pretty Woman soundtrack. Anything Kygo. I love to work out to music. Yesterday, I did a country ride [on Peloton], which was phenomenal.

Before the pandemic, you loved in-person workout classes. Has Peloton replaced those for you?

Thank goodness we had a Peloton. It’s such a good stress reliever. I DM all the instructors. I love them so much. I need a class, I need direction, and I need it choreographed to music. That’s my jam. I can’t be left to myself, or I’ll start picking my face, looking for gray hairs, or looking at Twitter.

Who are your favorite Peloton instructors?

There’s a guy named Cody, who loves hot music, the Backstreet Boys, Britney Spears. His Britney Spears ride is phenomenal. Alex loves his hip-hop. There’s Olivia, who’s a little firecracker and she’ll just kill you. The country ride [was hers]. Adrian, whose strength and treadmill classes I love, I DM’d him yesterday. I took his arms class, which was phenomenal.

And do they respond to your DMs?

Yeah, probably because they just feel bad for me — and I think we have these long-standing relationships. [Laughs.]

Final question: The past year has been really tough. What words of advice do you have for someone who’s having a hard time right now?

Talk to someone. Don’t keep it all in. And check on the ones you love, because you never really know what they’re going through.

More like this
Chelsea Woody On Shattering Stereotypes In Surfing
By Leah Groth
Lance Bass Says This Workout Machine Has Changed His Life
By Kaitlyn Wylde
11 Benefits Of Cross-Training
By Carolyn Steber
How To Do A Split, According To Experts
By Carolyn Steber
Get Even More From Bustle — Sign Up For The Newsletter