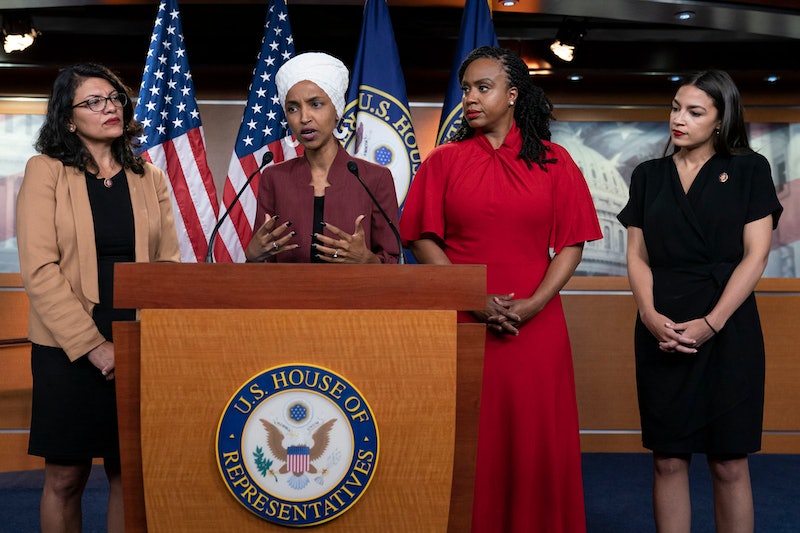 Votes are still being counted and all eyes are on Joe Biden and Donald Trump right now, but luckily we have one cause for celebration. It’d seem the sisterhood is here to stay as Alexandria Ocasio-Cortez, Ilhan Omar, Rashida Tlaib, and Ayanna Pressley – AKA The Squad – have all been re-elected to Congress. These four women have used their two years in office to speak out unapologetically on issues including extending health care rights, race and gender inequality, and climate change. And it’d seem they’re only just getting started.

Ilhan Omar is a representative from Minnesota, Rashida Tlaib from Michigan, Alexandria Ocasio-Cortez from New York, and Ayanna Pressley from Massachusetts. They were all predicted to keep their seats this election having achieved huge popularity during their re-election campaigns and throughout their time in Congress as The Squad. Tweeting after their wins were announced, Omar wrote, “Our sisterhood is resilient.”

While the race for Ocasio-Cortez’s seat in New York was not considered to be close, that didn’t stop her from campaigning hard. The Bronx-born Congresswoman raised over $17 million while Republican John C. Cummings, who was running against her, raised $9 million.

Speaking about her re-election, Ocasio-Cortez said:

“Serving New York-14 and fighting for working-class families in Congress has been the greatest honor, privilege and responsibility of my life. Thank you to the Bronx and Queens for re-electing me to the House despite the millions spent against us, and trusting me to represent you once more.”

The progressive political action committee Justice Democrats helped to get Ocasio-Cortez, Omar, Pressley, and Tlaib elected two years ago and have endorsed even more candidates during this election. Jamaal Bowman, another representative from New York and Cori Bush from Missouri have both already won their races, meaning The Squad is about to get bigger.

The four Congresswomen will no longer be new representatives on the hill and while they’ve frequently come up against criticism from Donald Trump and the government, Pressley tweeted her supporters after her win saying:

“Together, we have fought for our shared humanity. We have organized. We have mobilized. We have legislated our values. I am so proud to be your congresswoman and your partner in the work. I believe in the power of us. And we’re just getting started.”