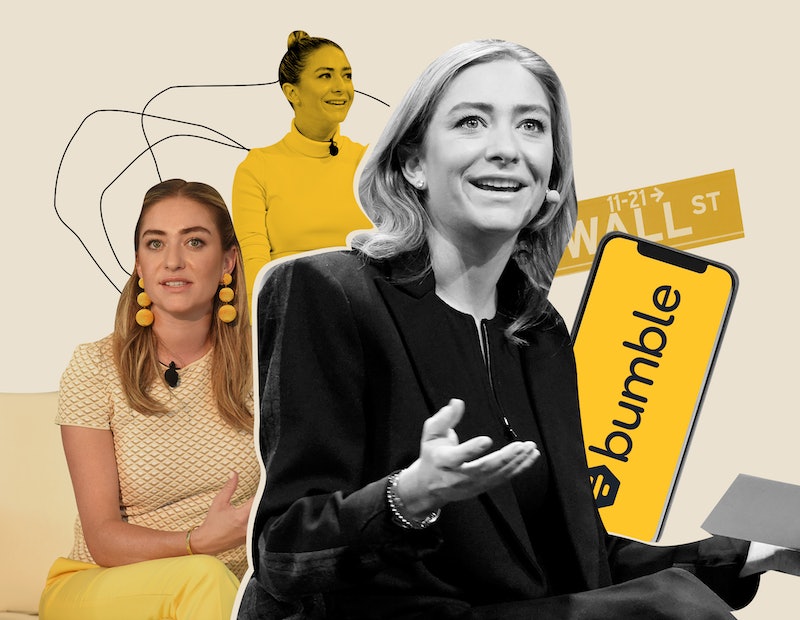 Is revenge, as Lord Byron wrote, “sweet especially to women”? I hope not, because it would be a shame for men to miss the delicious reprisal of Whitney Wolfe Herd becoming a billionaire last week. Last Thursday, the founder and CEO of Bumble celebrated the company’s IPO by opening the NASDAQ in a Bumble-yellow suit, her very cute baby on her hip. Twenty-four hours later, Forbes announced that her 12% stake in the company meant she had joined the ranks of Oprah Winfrey, Sheryl Sandberg, and Meg Whitman. Coming on the heels of Kylie Jenner’s demotion to 700-millionaire, Herd, who is 31, is America’s youngest self-made female billionaire.

Does “self-made” mean anything in the realm of venture capital-backed startups? Unclear. But you don’t have to be wild about the idea of billionaires to appreciate that, in the world of startups, the initial public offering is the finish line. When shares of a company become publicly tradable, and the market decides how much the company is worth, the billion-dollar idea becomes an actual billion dollars. It’s an image that’s going in the documentary, the kind of moment that Herd’s former bosses might have been imagining as they tried to push her out of Tinder, as Herd claimed in a 2014 suit. And so, on the level of pure comeuppance, Bumble’s IPO was a beautiful sight.

Before she founded Bumble, Herd was one of the first employees at its rival Tinder, working at a startup incubator owned by IAC. She came up with the name, and she recruited its early users on college campuses. According to company lore, she had the insight to start with women because men would go where women were. She also dated the chief marketing officer Justin Mateen, and after they broke up, things got ugly. In messages that later became public, he seemed to obsess, in the ugliest terms possible, over her conversations with other men. He warned her that she would have to earn his trust and avoid damaging his pride to survive at the company. Mateen allegedly said that Herd shouldn’t be listed as a co-founder because a woman co-founder “makes the company seem like a joke,” and that being a female founder of a hookup app made Herd look “slutty.” Herd gave up, and tried to negotiate her exit with CEO and co-founder Sean Rad. Rad allegedly attempted to withhold her unvested shares in the company; she sued the company for sexual harassment and discrimination, settling out of court and walking away with a reported $1 million.

It’s easy to forget about the Tinder saga because Herd isn’t allowed to speak about it, and because it immediately predated a wave of women and people of color speaking out about their mistreatment in tech, entertainment, and media. Increasingly, people tell these stories on their own terms, on their own platforms — out of the shadows of forced arbitration, but also with no promise of restitution. Aside from the sacrificial sacking of a bad boss here and there (often someone whose star was fading anyway), we don’t seem to know exactly what to do with all these stories of harassment, sexism, and racism. People who leave their jobs risk becoming known primarily for speaking out. Those who stay risk spending a lot of time on committees intended to fix the problem they called attention to, instead of doing the work they wanted to do in the first place.

When Herd launched Bumble, I feared both courses for her. The women-message-first platform sounded like “feminist Tinder” — a good idea but, I worried, a little niche. I imagined she would write a book and appear on a lot of panels — admirable work, but work that no man envies.

Then suddenly all the single women I knew were using Bumble, because it had none of the scattershot creepiness of Tinder. Then suddenly all the single men I knew were using it, because it was a relief not to worry about being a creep. Every year the app acquired new young users who had no idea that its founder was briefly the poster child for sexism in tech. Bumble fended off a trade secrets lawsuit from Tinder; Herd survived a majority stake from a Russian billionaire who had been accused of fostering a misogynist work environment in the United Kingdom. Mateen and Rad left their roles at Tinder, and Rad remains embroiled in lawsuits with IAC. Rad claimed IAC undervalued the stock when taking Tinder parent company Match public to avoid paying him and other early employees out; IAC accused Rad of secretly recording employees; Rad and nine other plaintiffs sued the CEO who succeeded him for sexual assault of another Tinder VP; that CEO sued them for defamation.

But nobody is talking about what that all means anymore. Tinder and Bumble are no longer seen as bellwethers of sex and dating or tech workplace culture. They’re just two apps in a pile on your phone, activated and deactivated with each breakup and each relationship, fully integrated into the way we live. Herd’s not exactly an underdog, but there’s a unique satisfaction in watching her succeed on precisely the terms the guys who tried to keep her down care about. She’s not merely a regular on the women-in-tech panel circuit, she’s one of the industry’s young winners, minted by a hot IPO market, her name synonymous with an app and her fortune attesting to her singular role in its development. And you know that stings.