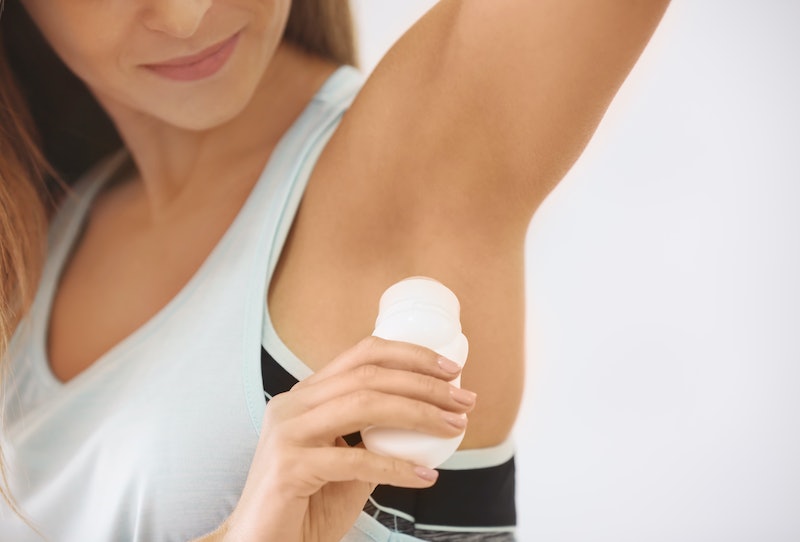 Whether you struggle with hyperhidrosis (excessive sweating), or simply sweat more than you'd like, investing in one of the best deodorants for sweaty people can help you stay dry during the hottest of days. But, there are a lot of deodorants and antiperspirants out there and it can get tricky to figure out which ones are really up to the task. According to Marisa Garshick, MD, board-certified dermatologist and Certain Dri chief medical correspondent, and Barry Goldman, MD, board-certified dermatologist in New York City, there are a few things to look for when shopping for a deodorant and antiperspirant for sweat.

Dr. Garshick tells Bustle, “Deodorants do not directly block sweat. Instead, they eliminate the smell that can be associated with sweat by providing a different scent to absorb odors.” As Dr. Goldman explains, “The smell comes from normally present bacteria breaking down sweat and body secretions.”

According to Dr. Garshick, “It’s important to note that the only antiperspirant ingredients currently approved by the FDA are aluminum-based. Aluminum-based products work by plugging up sweat ducts to directly block the release of sweat from glands. Products are often available as only antiperspirants, only deodorants, or a combination of the two.”

But, sit back and relax. Here are the best deodorants for sweat that will keep you feeling dry and smelling your best.

Barry Goldman, MD is a board-certified dermatologist at Goldman Dermatology in New York City. He is also a Fellow of the American Academy of Dermatology.

Dr. Goldman calls Certain Dri the “best over-the-counter antiperspirant.” And not only is this expert-recommended antiperspirant powerful, but it also comes with the backing of other doctors who say this long-lasting formula is great for heavy sweaters. What’s more, over 1,000 Amazon reviewers have given this antiperspirant a five-star rating. Word to the wise: Fans say less is more with this formula, so apply carefully.

According to one reviewer: “This is the only deodorant I've found that actually diminishes underarm sweat without having an overpowering fragrance in hot weather. I love this deodorant and use nothing else. It goes on smoothly, cleanly and leaves no residue.”

I know what you're thinking: Spending $19 on a 1-ounce roll-on deodorant seems like a lot. But, this deodorant and antiperspirant packs clinical strength sweat-fighting capabilities and is even advertised as a great treatment for hyperhidrosis, or excessive sweating. This strong (and FDA-approved!) formula touts a seven-day lasting power, and fans have flocked to the review section to say that this is the best deodorant they've ever tried, with some calling it, "career changing," and others saying after trying this formula, "I got my life back." Enough said?

According to one reviewer: “Folks, this stuff is the real deal. I honestly applied it only four (4!!!!) times in 11 days in the RAINFOREST. I also applied it to the bottoms of my feet. As I write this, we’ve returned over 48hrs ago and I still have not felt or smelled sweat from my armpits.”

Looking for a natural deodorant? Dr. Garshick warns, "Natural products, or products that are aluminum-free, are considered deodorants because, although they help to mask odors, they do not actually block the release of sweat from the glands."

But, if you're set on a natural deodorant, there are still some popular options that heavy sweaters love (even if their aluminum-free formulas don't block sweat). For example, this Native deodorant for sensitive skin that’s recommended by Bustle editor Cristina Sanza. “I have sensitive skin and fragrance allergies and I’m able to use this deodorant without any irritation,” she says. “I’m currently using the Cotton & Lily scent but I've tried a few other fragrances — including Coconut & Vanilla and Candy Cane — and liked each one.” And if you prefer an unscented deodorant, that’s an option too. What’s more, the baking soda-free formula offers 24-hour odor protection and contains moisturizing coconut oil and shea butter.

According to one reviewer: “I prefer a natural deodorant, but suddenly became allergic to the one I’d used for years. Native was what I tried after reading lots of reviews, and it works great! All I use now!”

This three-step system is recommended by both dermatologists and people who have hyperhidrosis. How this system works: Apply the roll-on deodorant in the morning, apply the ointment in the evening, and shower with the body wash daily. This three-part process helps prevent excessive sweating, and it cleans and deodorizes your underarms so you'll be left odor-free. While $38 may seem steep, hundreds of Amazon fans have said this deodorant worked when nothing else would.

According to one reviewer: “I’ve been searching for something that could help with my hyperhydrosis since I was 16. Now 14 years later I have something that actually works. I’ve been using it for 4 days now and it’s already working. I have sensitive skin too and it doesn’t irritate me.”

This natural roll-on deodorant comes highly recommended by Bustle editor Scarlett James, who says, “As a former ride-or-die antiperspirant user, the slightest whiff of underarm clamminess sends me into a spiral. (I’m only slightly exaggerating.) It was my biggest mental hurdle in transitioning to natural deodorant, but the Real Purity roll-on keeps me supernaturally fresh and dry.”

The gentle formula is scented with essential oils and contains vegetable glycerin and organic aloe to help soothe the skin. “It outperforms drugstore favorites in both wetness and odor protection — even after a wipeout HIIT class — and does so using natural ingredients with zero aluminum,” James adds. “Oh: and it goes on essentially clear, meaning you don’t have to worry about white residue under your arms when you’re wearing sleeveless tops. I’m so obsessed that I will happily continue to rebuy despite the higher price tag.”

According to one reviewer: “It's amazing! It dries really quickly and has great odor control. I put it on yesterday morning after my shower, went about my day, went to bed, got up this morning and did a crazy cardio workout and still didn't smell!”

This Arm & Hammer advanced sweat control deodorant is a game-changer if you sweat a lot. Its unscented formula is still very powerful and can offer protection against sweat all over your body. Reviewers say it works great at curbing excessive sweating, and doesn't irritate sensitive skin, as well. Best yet, at $20 for six deodorants, this is a superb value.

According to one reviewer: “I am allergic to fragrance and so many supposedly unscented products have 'masking fragrance' which I am also allergic to. This is truly fragrance-free and I have no issues from using it.”

If you have sensitive skin, this clinical strength deodorant is a great buy. Tested by dermatologists, this fragrance-, paraben-, and formaldehyde-free formula won't irritate even the most irritable skin. It also offers 24-hour protection against odor and sweat and has won over thousands of Amazon fans. It's even gluten-free, cruelty-free, and vegan.

This strong antiperspirant is motion-activated, meaning it's perfect for anyone who's looking for a deodorant to use while exercising or working out. This formula provides all-day protection against both sweat and odor and is even packed with moisturizing ingredients to help soothe irritated underarm skin. While it's lightly scented, most reviewers report this is one of the reasons they love it.

According to one reviewer: “I’ve tried a ton of different options and this hands down works and smells the best. Not chalky and no white stains as of yet. Goes on almost like hand lotion and smells great. Wish I’d have found this years ago.”

This gel deodorant offers clinical-strength protection, so you can head out for whatever your day has in store without worry. Designed with 10,000 odor-fighting molecules, this powerful gel antiperspirant is smooth so you won't have to deal with any irritation. Even better, reviewers who suffer from excessive sweating say this has worked magic. The "ultimate fresh" scent is light and crisp, and fans say this is their favorite after trying a bunch of different scents from Gillette.

According to one reviewer: “Gillette Clinical is no doubt the best antiperspirant/deodorant made. It will easily last 48 hours in the event you need it to. It goes on clear, and works better than any other product to stop sweat and odor. Since finding this product, my deodorant issues have been solved.”

Both allergy-tested and aluminum-free, this deodorant is a great choice for anyone who has experienced reactions from other formulas in the past. Not only does it offer 24-hour protection against odor and sweat, but it dries quickly so you won't end up with any of it on your clothes after you apply. As with other aluminum-free deodorants on this list, it doesn't perform quite as well at minimizing sweat as the aluminum-based antiperspirants on this list. But reviewers say it does a great job eliminating odors and works fine at controlling sweat under non-extreme heat conditions.

According to one reviewer: “This is my absolute favorite deodorant. IT WORKS. It’s not perfumey, it has a nice neutral clean smell. It’s small enough to fit in my purse or car console. It actually DOES work for 24 hours!”

Boasting 72 hours of protection, this Right Guard "XTreme Defense" deodorant is a fantastic deal. For just $14, you get a four-pack of this popular deodorant and antiperspirant. Even better, the ingredient list has been tested by dermatologists, so it won't irritate your skin with repeated use. This gel stick comes in a "fresh blast" scent that is mild enough that it can be used no matter where you're headed in the day.

According to one reviewer: “I love this deodorant and have been using it for years. Not only does it smell pleasing but it protects from stains on your undershirts and does a good job of keeping you dry all day.”

These antiperspirant towelettes have racked up thousands of Amazon reviews because they get the job done. Providing clinical strength protection, each towel is designed to help you stay dry for up to seven days. How they work: Before bed, rub a towel under your arms when they are clean and dry. Allow your underarms to air dry and then go to bed. During the night, this antiperspirant will go hard to work on your sweat glands and help provide extra protection during the days to come. Even better, these towelettes can work on any skin if excessive sweating affects your body in other areas like your hands, forehead, or feet. But, don't take my word for it: Over 13,000 Amazon fans sing their praises.

According to one reviewer: “My first real challenge for SweatBlock was about a week after I first tried it. I had a job interview. Not just one on one but I was surprised with a panel of 6 people interviewing me. Not a drop of sweat! This stuff is absolutely amazing!!!”

This article was originally published on May 23, 2016