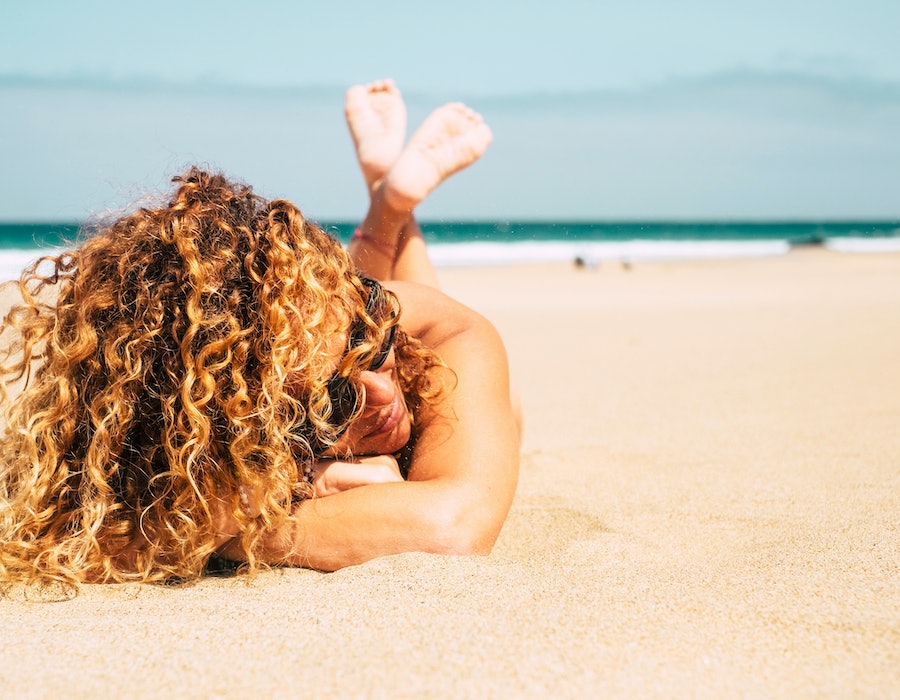 One of the fun benefits of summer (besides warm weather, grilling and spending all your time outside), is that the sun can naturally lighten your hair. Any blonde who's spent time outside knows the sun can lighten it, creating natural-looking (and free!) highlights. Of course, it's not realistic to spend every day outdoors, but luckily there are ways to to lighten your hair without bleach.

However, while there are natural ways to give your hair a bit of a lightening boost, Shvonne Perkins, director of training at Madison Reed, a home hair-coloring system, says your expectations shouldn't be too high.

"The thing to know about any of these methods is that they are all going to turn out very subtle results," she tells Bustle. "You can repeat these a few times over the summer and, by the end, probably have more sun-kissed dimension than if you did nothing at all, but don't expect drastic results using these ingredients."

She also explains there are downsides beyond just not seeing results. "Remember, natural doesn't mean without reaction or even totally safe," she says. "People have sensitivities and allergies to any number of natural things. Try treatments for the minimum time first. Then, if your hair reacts well, you can extend the time as you go."

At-home hair lightening also doesn't just come with a warning about reactions and allergies. Ingredients like hydrogen peroxide and baking soda are other oft-mentioned ways to lighten your strands, but experts strongly warn against their use because they're harsh on your hair.

Knowing the warnings, if you're just looking for a little bleach-free, glow-up, here are four natural ways to lighten your hair this summer.

Lemon juice is one of the easiest and most common ways to lighten your hair, but there are some caveats to the process, according to celebrity colorist Sherry Ratay of Salon Ratay. She explains lemon juice works only for light brunettes and blondes — if you're a dark brunette or a redhead, you'll achieve either no lightness at all, or your hair will turn out brassy. That's because lemon juice contains citric acid, which opens the cuticle of the hair when it's exposed to heat (like sunlight) and removes the first layer of color. For blondes, this creates a lighter effect, but brunettes will more likely experience an orange tone.

If you're a light brunette or blonde and want to test out this DIY method, Perkins recommends mixing two parts leave-in spray conditioner with one part lemon juice and using a spray bottle to apply to damp hair. Once done, get enough sun exposure for your hair to heat up, and wash out the lemon a few hours later. She does caution, though, that you shouldn't expect major results: "This is not bleach," she says. "So it won't be bleach results."

After you've washed, Ratay recommends the extra step of using a hydrating mask, as the acidity of the lemon can dry out your hair. It's also important to note that while lemon is a common and much-touted method of hair lightening, not all stylists believe it's the way to go. Rex Jimieson, color educator and colorist at Maxine Salon in Chicago, says acids like lemon juice can be corrosive and damage the hair follicle.

Perkins says cinnamon and honey are the ultimate combo when it comes to DIY methods. When mixed with cinnamon, the small amounts of hydrogen peroxide in honey become activated and work as a brightening agent in the same way as lemons, by lifting the first layer of color from hair. To utilize them, you'll need to create a hair mask, and recipes typically call for coconut or olive oil as a mixing agent for easier application.

She says to combine honey, hot water, conditioner, and olive or coconut oil all in equal parts of half a cup, then add a tablespoon of cinnamon. Leave it on for half an hour, then wash it out. According Perkins, the more frequently you use the mixture, the more it will lighten your hair.

Chamomile tea is one of the best options for those looking for a gentle method, but like lemon juice, it's only effective on light brunettes or blondes. Perkins explains that chamomile "contains certain flavonoids that are known to affect melanin. They also contribute to brighter pigments that are responsible for golden and yellow hues, which often allows for better reflectivity in the hair."

To try it, Perkins says, "Brew just like a strong tea, cool it down and either submerge — literally put your hair in a bowl or bucket to fully saturate — and then put it in a cap for about an hour. Or you can dilute with water, spritz into the hair, and wear throughout the day." Once finished, wash and your rinse hair as normal.

Jimieson says apple cider vinegar works similarly to lemon juice: After repeated use, apple cider vinegar begins to lower the hair's pH, which will open the cuticle slightly. Then, the first layer of underlying color is stripped away when it's exposed to sun or heat. "For most of us that is red if your hair is dark, or orange if your hair is medium toned," he says, "but if you’re naturally a blond it will reveal yellow, achieving more of a 'solid brass.'"

To apply, use a spray bottle with equal parts apple cider vinegar and water, and spritz throughout the length and ends. Jimieson cautions, however, that ACV — like lemon juice — can cause direct damage to the cuticle, which can result in inadvertent lightening with added heat and sun exposure.

"Scientists in the cosmetic industry have taken decades to give us amazing products that contain some of these ingredients, but they are balanced by other very important ingredients," he tells Bustle. "You would never see vinegar, lemon juice, lemon extract, other vinegars, or hydrogen peroxide as the main or first couple of ingredients listed in over the counter hair products, because it isn’t helpful to the look or quality of the hair."

More like this
Your Guide To The Octopus Haircut, The Chic Shag-Mullet Hybrid
By Danielle Sinay and Jordan Murray
Here's How To Rock A Shag Haircut On Straight Hair
By Paris Giles
The Beginner's Guide To French Braids Vs. Dutch Braids
By Audrey Noble
I Dyed My Virgin Hair “Kendall Jenner Red” & Now I’m A Different Person
By Kimberly Perry
Get Even More From Bustle — Sign Up For The Newsletter

This article was originally published on June 26, 2015