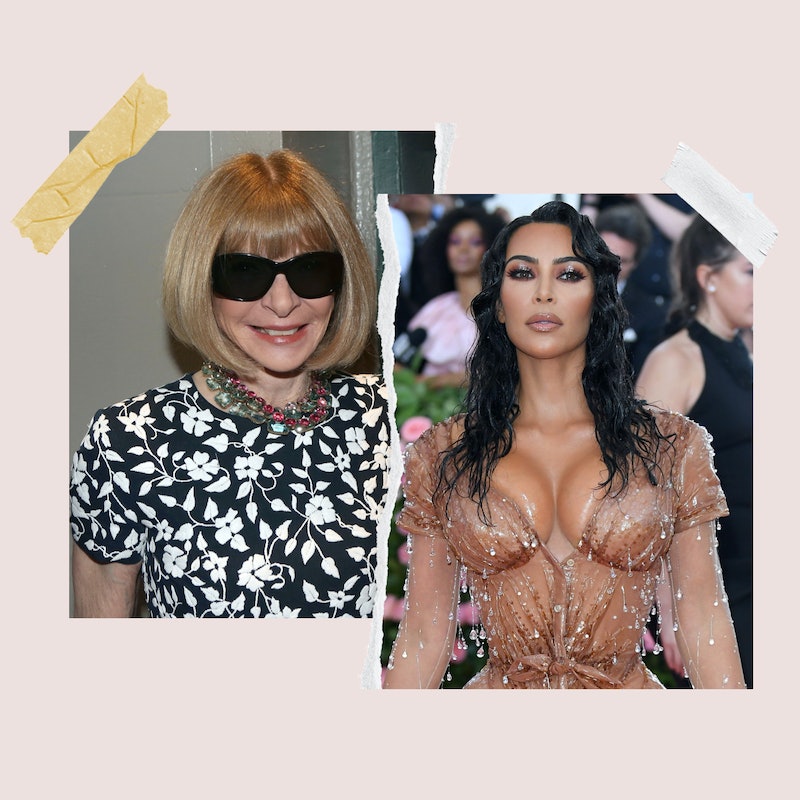 This article is adapted from ANNA: The Biography, out May 3 from Gallery Books, a division of Simon & Schuster. Order it now here.

In early 2014, a cultural phenomenon was reaching its apex in the zeitgeist, so of course Vogue editor-in-chief Anna Wintour was thinking about it. Kim Kardashian and rapper-slash-fashion designer Kanye West, who had been friends with Anna for years by that point, were getting married. Anna said to creative director Grace Coddington, “Kim and Kanye are getting married. Why don’t you do a take on them with actors from Saturday Night Live?”

Coddington, who almost never styled celebrity shoots, replied, “Well, if we can get them, why don’t we do the people themselves?”

“Oh my goodness,” Anna said, giving Coddington a funny look, realizing that was the right idea. “That would be fantastic.”

Of course, this was a huge turning point for Anna — and for Vogue. Kardashian was, after all, a woman she had purposefully kept out of the pages of Vogue and the Met Gala for years.

Anna later said of the cover choice, “Kim and Kanye were part of the conversation of the day, and for Vogue not to recognize that would have been a big misstep. But at the same time I knew that it would be deeply, deeply controversial and that many of our readers and our audiences would be horrified.”

This kind of move was one way that Anna, who took over Vogue in 1988, had stayed on top as an editor for decades. She knew just how and when to surprise people and create a big media moment, something she perfected over the course of many years planning the Met Gala, now the biggest red carpet event of the year.

Even if Anna didn’t fully understand the medium, it became apparent in the early 2000s that the internet was a useful tool for promoting parties. The morning after an event, people could click through images of the rich and famous wearing fancy dresses at the Met Gala or a movie premiere. After Anna, who began planning the gala in 1995, transformed it from a charity party for sequined socialites to a celebrity event with mainstream appeal, interest in attending started to explode.

Stephanie Winston Wolkoff was officially Vogue’s events planner, and unofficially the “general.” She planned all Vogue parties, including the gala. (Her team consisted of one assistant, whom Anna treated as her third assistant. If she knew her name, she didn’t use it, instead calling her “Stephanie’s girl.” When her assistants weren’t available, “Stephanie’s girl” was summoned to answer the phone or take “the book” — a dummy copy of the magazine — to her house at night.)

Planning the gala began with creating the guest list. Winston Wolkoff would draw up a list of 775 people, including emerging designers, establishment designers, Vogue cover stars, and actors from big films. Then Anna went through it all, crossing off names and adding others. “Anna created the whole entertainment and fashion world that was on the red carpet of the gala,” said Winston Wolkoff.

To sell the tables, Winston Wolkoff would send personalized letters to designers, hand-signed by Anna, asking them to commit. “It wasn’t as easy as you’d think,” said Winston Wolkoff. Some people wanted a free table, but her goal was to get people to spend as much as possible. People who didn’t get invited called and asked to attend, promising a huge donation so long as they could just get a ticket. Some were designers who were just starting out but not big enough to be on the initial invite list. Hollywood agents also started calling, trying to get their stars in. “We’re happy to take your donation,” a representative from Vogue would tell them. “But we have no more tickets to sell.” Said Winston Wolkoff, “You could have had a billion dollars, you were not going to get that ticket. ... There had to be a reason for you to be in that room.”

Representatives for the Kardashians called, trying to get them in. “The Kardashians had zero style, and their whole reason for who they were was nothing that tied to Vogue,” said Winston Wolkoff, a significant knock against them being, in Anna’s eyes, that they weren’t known for “making a difference.” They were of the same ilk as other banned guests in the aughts — the Hilton sisters, who to this day have never attended, and Nicole Richie (whom Anna eventually did allow in).

When Kim finally went for the first time in May 2013, Winston Wolkoff, who was no longer planning the gala but stayed friends with Anna, thought, Anna really sold her soul to the devil. But she also understood Anna’s change of heart. “At the end of the day, Vogue’s a business,” she said. “I think that at a certain point you’re going to have to give in to what culture, what people want.”

Before the shoot was officially booked, Anna and West discussed it face-to-face. She knew she had to keep the entire thing secret. Coddington, who almost never styled celebrities, requested custom wedding dresses from designers for Kardashian to wear. Coddington sometimes commissioned custom looks for a shoot, as she did with her famous Alice in Wonderland spread where she had designers like John Galliano and Karl Lagerfeld make blue dresses. For Kardashian’s dresses, Coddington provided only her measurements. Designers might have had a feeling of who they were designing for based on those, but didn’t get confirmation until Kardashian showed up for her fittings. “All the designers were super excited about it,” said Hamish Bowles, who wrote the accompanying story.

Vogue staff knew something was up when Coddington left Paris Fashion Week early for a secretive shoot. Mark Holgate, Vogue’s fashion news director, speculated that she was actually off to shoot Kate Middleton.

Anna told Coddington and Bowles to wear disguises when they went to Los Angeles to shoot with Annie Leibovitz (even though a shot of the couple walking along the Seine in Paris appeared in the spread, it was fake — the pair were actually photographed running along a private airport runway in LA and then photoshopped into Paris). If anyone saw Vogue staff with Leibovitz and Kardashian, they would know where the pictures were running. So Coddington tied a scarf around her instantly recognizable voluminous red hair, tucked it under a hat, and put on dark glasses. In the art department, a cover Holgate remembered featuring model Kate Upton was put up on the board so that Kimye’s wouldn’t leak to the press.

One day back at the office, Anna called in Holgate to discuss her editor’s letter, which he was writing each month, for the May issue. When he stepped into the office, two highly unusual things happened. First, her assistants closed the door behind him. Then Anna came around her desk holding a manila envelope. It was all so strange and dramatic that for a moment Holgate thought he was about to be fired.

“Mark, there’s something I want to show you,” she said, and took the real cover out of the envelope. “This is top secret. This is going to be the cover. I want you to write another letter.”

It wasn’t Coddington’s favorite set of pictures. She liked the one of Kanye photographing Kim taking a selfie with her baby, North. But the rest of the published images — of Kimye on a private plane, by the Seine, draped over a matte-black Lamborghini — she found “too expected and normal.”

Of course, the backlash was immediate when the cover finally dropped, featuring Kardashian wearing an ivory A-line duchess satin dress by Alber Elbaz for Lanvin, and West in a dark Saint Laurent blazer by Hedi Slimane. The hashtag #boycottvogue trended on Twitter, and people threatened to cancel subscriptions — the broader public embracing the classism Vogue had long projected, and for which they would later scorn Anna.