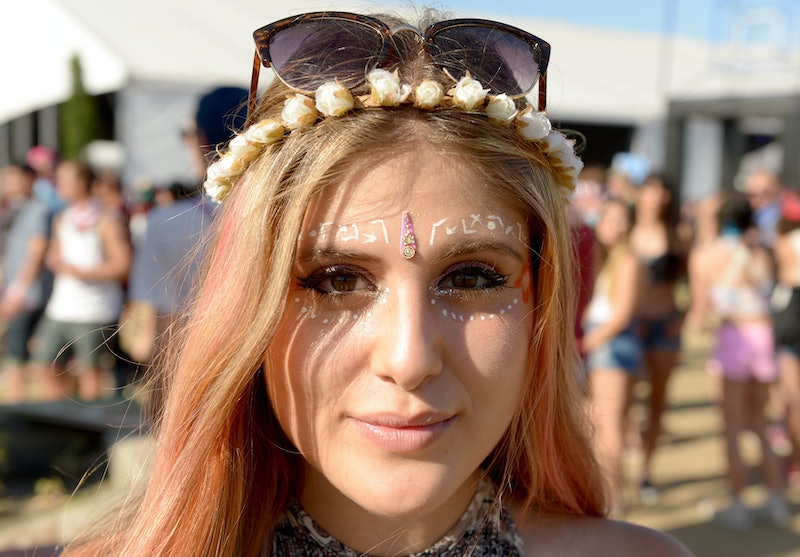 The term "cultural appropriation" is bandied about a lot these days — largely when a fashion line or a famous person plays into a look or accessory that had its origins in another culture and pays no attention to what it means or where it comes from. And that's one of the key problems with cultural appropriation: It uses other cultures as cute accessories, rather than real things with meaning to real people.

One famous case of cultural appropriation is the Native American feather headdress, which is now banned at several festivals around the world — and woe betide any starlet who thinks it's "cute" to pose in it on Halloween or Instagram. But what about other cultural artifacts?

Basically, the key question to ask yourself if you're thinking of wearing something religious or ceremonial is: Are you part of that culture? Do you know the significance? Did you research the meaning and history? Are you being respectful of that particular ethnic group and giving them credit for their cultural practices? No? Then you should probably step away. Just because it's a trend doesn't mean it's in any way OK. Still not sure?

Here are 9 trends that your might not realize are cultural appropriation.

What They Really Mean: Bindis are purely for women, and they have many different specific cultural meanings in India. Red ones are for married women and symbolize love, while black ones are for widows. They're situated between the brows at the site of the Third Eye, and function as a spiritual reminder for Hindus of their faith and duties at times when they aren't at prayer.

Why You Shouldn't Wear It: The increasing appearance of the mark on the foreheads of fashionistas around the world — under the excuse that it's "so '90s" — is not impressing people who wear them as, you know, part of their culture. The hashtag #ReclaimTheBindi is ruthlessly speaking truth to the hordes of people who apparently think they are a cute hippie accessory instead of a religious tradition.

What They Really Mean: These small buns all over the head may have had their origins in the Zulu tribe in the southern part of Africa. Since then, they've been part of African culture for centuries, and have spread all over the world. They're often used as an overnight style for natural hair.

Why You Shouldn't Do It: Taking on the bantu knots if you're not a Black woman is increasingly seen as pretty culturally insensitive.

Day Of The Dead Makeup

What It Really Means: The Day of the Dead, or Dia de Muertos, is a hugely significant Mexican holiday. People come together to pray for dead family members and hold various rituals. Its roots are thousands of years old.

Why You Shouldn't Do It: The proliferation of Day of the Dead makeup on Halloween is rightfully pissing off some Mexican people, who point out that it's a fundamental part of their culture's perspective on life and honoring the dead — not just a pretty bit of makeup. Best to rethink this Halloween costume if it isn't actually your culture.

What It Really Means: This look stems from a very particular subset of society — which does not appreciate being made into weird "fashion symbols" while the reality of their lives is neglected. Chola culture, which involves pronounced eyebrows, lined lips, and a distinctive fashion sense, emerged in Mexican-Americans communities in the '80s and '90s, and was a defiant statement of identity in a very racially charged environment.

Why You Shouldn't Do It: The real problem isn't that chola style isn't great — it is — but that people are either borrowing it without paying any attention to its roots, or are actually making fun of it.

What It Really Means: The reality is that the pieces a bride wears at an Indian wedding are all very context-specific, and have unique meanings. Payals, or anklets, are meant to symbolize the arrival of a wife into her husband's house. The beautiful maang tikka, or hair accessory falling down the part in the middle of the hair, marks a specific chakra, and has deep spiritual significance. Even the nose ring, or nath, has cultural associations, depending on where in India it is being worn.

Why You Shouldn't Do It: Indian bridal jewelry, just like henna, is not something you can shove onto yourself out of context without expecting people to be confused and affronted. At best, you'll look like a poser. At worst, you'll look insulting. It's possible to delight in the glory of a particular culture's skill in jewelry-making without, you know, insulting them by wearing it completely out of its intended context as a cute thing at Coachella.

What They Really Mean: In Japanese, kimono translates to “thing to wear” and it refers to the country’s traditional garment that has been around for hundreds of years. Over time, it has also become the national dress of Japan and is worn with accessories including zōri sandals and tabi socks.

Why You Shouldn’t Wear It: The kimono is typically known to be special attire for life events such as weddings, tea ceremonies, funerals, religious gatherings, and more. If you casually rock it underneath your look or wear it on a daily basis, you instantly diminish the meaning behind it.

What They Really Mean: From Southeast Asia to the Middle East, North Africa, and more, communities all over the world wear turbans to signify their religious faith. The cloth headwear is mandated among male and female Sikhs, a religion that originated in the Punjab region of India.

Why You Shouldn’t Wear It: You should never simplify or downplay this significant part of the Indian faith, especially as Sikhs continue to be victims of hate crimes for wearing turbans.

What They Really Mean: The Hijab is a covering worn in public by Muslim women when they’re in the presence of men outside of their immediate family. It covers the hair, head, and chest, but the laws for wearing differ all over the world.

Why You Shouldn’t Wear It: Muslim women are bashed for hijabs, yet non-Muslims view it as a chic fashion statement. Talk about racist biases. The Western world should stop making assumptions that Muslim women aren’t empowered if they wear a hijab, and they certainly shouldn’t appropriate it as a passing trend.

What They Really Mean: The burqa or burka is an Islamic outer garment for women that covers the entire body and face. There’s also a face veil draped over a woman’s face keeping her completely shielded while still allowing her to see.

Why You Shouldn’t Wear It: Like the hijab, it’s clear there’s a double standard tied to burqas and niqabs that you shouldn’t perpetuate. If a headdress has no religious significance to you, don’t put it on. There are plenty of other ways to make a style statement.

More like this
Cyber Monday Deals 2022: The Best Fashion Sales To Shop
By Dominique Norman
The 10 Biggest Tattoo Trends Of 2023
By Carolyn Steber
A Definitive Guide To The Best Gucci Bags Worth Investing In
By Allie Fasanella
Kim Kardashian Is “Disgusted & Outraged” By Balenciaga Ads
By El Hunt
Get Even More From Bustle — Sign Up For The Newsletter

This article was originally published on Oct. 28, 2015