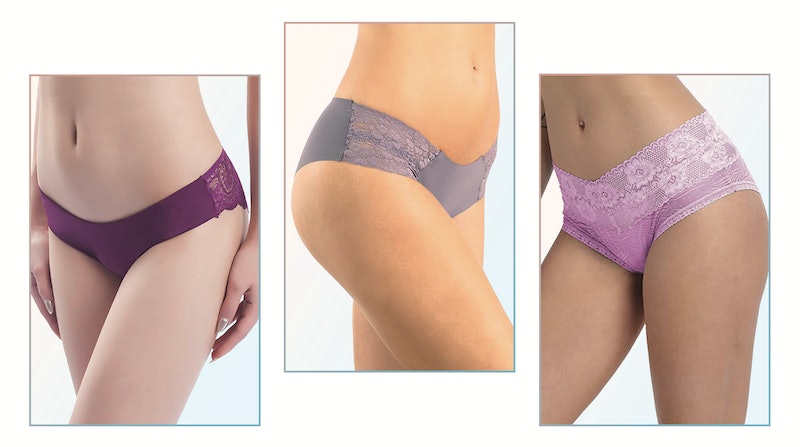 For cute and comfortable coverage, the best cheeky underwear feel like your favorite briefs but disappears under clothes almost as well as a thong. Score sets in cotton for off-duty days or pick up some in mesh or lace when you want to treat yourself to especially pretty underwear. There's only one rule: You have to love wearing them.

Curious what the difference is between hipster versus cheeky underwear? You’re not alone. It all comes down to the rear view, according to ThirdLove. A hipster is essentially a low-rise brief with full coverage in the back and (as to be expected) a hip-hugging waistband, while cheekies are a distant cousin that feature an angled or curved cut across the buns for a peek of cheek. A tanga cut is the cheekiest cheeky of them all, though it manages not to veer into thong territory. You'll know a tanga because they're roughly the same size front and back.

As someone who tends to be all or nothing with my own lingerie, I'll admit that I have pondered, "What’s the point of cheeky underwear?" For me, it's either a comfy brief or a thong so I don’t have to guess. But, there’s actually a method to the madness that has nothing to do with looking cute for the patriarchy. Cheeky cuts are far less likely than briefs to leave visible panty lines; plus, they afford a bit more protection against, say, your jeans. If you hate thongs and VPL with equal fury, a cheeky pair is a good middle ground.

Whether you opt for seamless or lace, any pair worth their salt will have a breathable cotton crotch to keep things healthy down there, but I scoured the internet to find pairs that check all of those boxes so you don’t have to. These five picks are the best cheeky underwear around, no matter what kind of outfit you have planned.